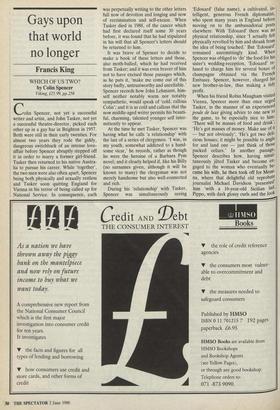 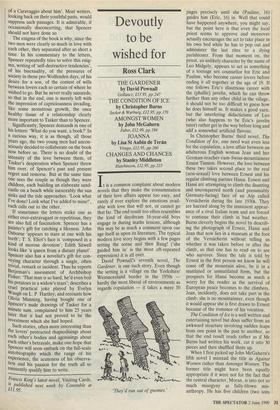 Gays upon that world no longer

WHICH OF US TWO? by Colin Spencer

Colin Spencer, not yet a successful writer and artist, and John Tasker, not yet a successful theatre-director, picked each other up in a gay bar in Brighton in 1957. Both were still in their early twenties. For almost two years they rode the giddy, dangerous switchback of an intense love- affair before Spencer abruptly stepped off it in order to marry a former girl-friend. Tasker then returned to his native Austra- lia to pursue his career. While 'together', the two men were also often apart, Spencer being both physically and sexually restless and Tasker soon quitting England for Vienna in his terror of being called up for National Service. In consequence, each

was perpetually writing to the other letters full now of devotion and longing and now of recrimination and self-excuse. When Tasker died in 1988, of the cancer which had first declared itself some 30 years before, it was found that he had stipulated in his will that all Spencer's letters should be returned to him.

It was brave of Spencer to decide to make a book of these letters and those, also moth-balled, which he had received from Tasker; and it was even braver of him not to have excised those passages which, as he puts it, 'make me come out of this story badly, untrustworthy and unreliable.' Spencer records how John Lehmann, him- self neither notably warm nor notably sympathetic, would speak of 'cold, callous Colin'; and it is as cold and callous that the now middle-aged writer permits his beauti- ful, charming, talented younger self inter- mittently to appear.

At the time he met Tasker, Spencer was having what he calls 'a relationship' with the last of a series of clergymen. 'I was, in my youth, somewhat addicted to a hand- some vicar,' he records, rather as though he were the heroine of a Barbara Pym novel; and it clearly helped if, like his Billy (no surnames given, although it will be known to many) the clergyman was not merely handsome but also well-connected and rich.

During his 'relationship' with Tasker, Spencer was simultaneously seeing

'Edouard' (false name), a cultivated, in- telligent, generous French diplomatist, who spent many years in England before moving on to the ambassadorial posts elsewhere. With 'Edouard' there was no physical relationship, since 'I actually felt physically revolted by him and shrank from the idea of being touched.' But 'Edouard remained unremittingly kind. When Spencer was obliged to 'do' the food for his sister's wedding-reception, 'Edouard' re- fused to charge him for several boxes of champagne obtained via the French Embassy. Spencer, however, charged his new brother-in-law, thus making a tidy profit. When his friend Robin Maugham visited Vienna, Spencer more than once urged Tasker, in the manner of an experienced poule de luxe giving advice to one new to the game, to be especially nice to him: 'There will be masses of food and drink;

i 'He's got masses of money. Make use of it

— but not obviously'; 'He's got two deli- cious houses; it might be possible to angle for and land one — just think of those packed cellars.' In another passage, Spencer describes how, having simul- taneously jilted Tasker and become en- gaged to the woman who eventually be- came his wife, he then took off for Messi- na, where that delightful old reprobate journalist Michael Davidson 'presented, him 'with a 16-year-old Sicilian lad, Pippo, with dark glossy curls and the look of a Caravaggio about him'. Most writers, looking back on their youthful pasts, would suppress such passages. It is admirable, if occasionally disconcerting, that Spencer should not have done so.

The enigma of the book is why, since the two men were clearly so much in love with each other, they separated after so short a time. In his commentary to the letters, Spencer repeatedly tries to solve this enig- ma, writing of 'self-destructive tendencies', of his bisexuality, of the pressures of society in those pre-Wolfenden days, of his desire for a son, of the contest of wills between lovers each so certain of where he wished to go. But he never really succeeds; so that in the end, one is merely left with the impression of capriciousness invading, like some monstrous growth, the once healthy tissue of a relationship clearly more important to Tasker than to Spencer.

Significantly, Spencer demands in one of his letters: 'What do you want, a book?' In a curious way, it is as though, all those years ago, the two young men had uncon- sciously decided to collaborate on the book now before us. There is no doubt of the intensity of the love between them, of Tasker's desperation when Spencer threw him over, of Spencer's past and present regret and remorse. But at the same time one sees the couple as though they were children, each building an elaborate sand- castle on a beach while inexorably the sun sinks and the tide approaches. 'Look what I've done! Look what I've added to mine!', each calls out to the other.

If sometimes the letters strike one as either over-extravagant or repetitious, they are also full of fascination. Spencer has a painter's gift for catching a likeness. John Osborne 'appears to stare at one with his teeth'; T. S. Eliot's face is 'composed in a kind of morose devotion'; Edith Sitwell looks like 'a queen from a distant planet'. Spencer also has a novelist's gift for con- veying character through a single, often trivial, remark or incident. Thus he reports Betjeman's assessment of Archbishop Fisher: 'That man is so hard, he'd even boil his potatoes in a widow's tears'; describes a cruel practical joke played by Evelyn Waugh on L. P. Hartley; and recounts how Olivia Manning, having bought one of Spencer's nude drawings of Tasker for a minute sum, complained to him 25 years later that it had not proved to be the investment which she had hoped.

Francis King's latest novel, Visiting Cards, Is published next week by Constable at £11.95.