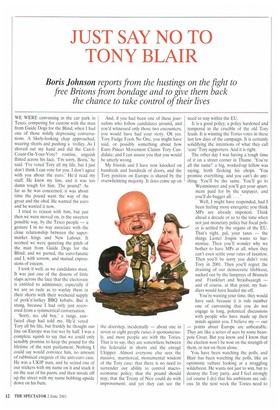 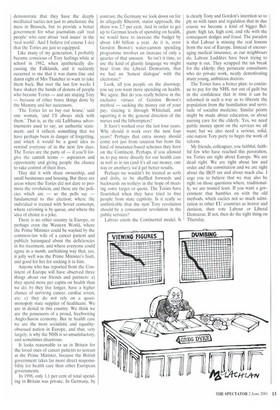 JUST SAY NO TO TONY BLAIR

Boris Johnson reports from the hustings on the fight to

WE WERE canvassing in the car park in Tesco, competing for custom with the man from Guide Dogs for the Blind, when I had one of those mildly depressing conversations. A likely-looking chap approached, wearing shorts and pushing a trolley. As I shoved out my hand and did the Can-ICount-On-Your-Vote? routine, anguish flitted across his face. 'I'm sorry, Boris,' he said. 'I've voted Tory all my life, but I just don't think I can vote for you. I don't agree with you about the euro.' He'd read my stuff. He knew my line, and it was too damn tough for him. The pound? As far as he was concerned, it was about time the pound went the way of the groat and the obol. He wanted the euro and he wanted it now.

I tried to reason with him, but just then we were moved on, in the sweetest possible way, by the Tesco people — a gesture I in no way associate with the close relationship between the supermarket kings and New Labour. It seemed we were queering the pitch of the man from Guide Dogs for the Blind; and we parted, the euro-fanatic and I. with sorrow, and mutual expressions of esteem.

I took it well, as we candidates must. It was just one of the dozens of little slaps across the face that the electorate is entitled to administer, especially if we are so rude as to waylay them in their shorts with their weekend supply of pork'n'turkey BBQ kebabs. But it stung, because I had only just recovered from a symmetrical conversation.

'Sorry, no, old boy,' a rangy, rawfaced chap had told me. He'd voted Tory all his life, but frankly he thought our line on Europe was too wet by half. I was a complete squish to say that we could only sensibly promise to keep the pound for the lifetime of the next parliament. Nothing I could say would convince him, no amount of rabbinical exegesis of the anti-euro case. He was a UKIP man, and he seized one of our stickers with my name on it and stuck it on the seat of his pants, and then strode off up the street with my name bobbing upside down on his bum. And, if you had been one of these journalists who follow candidates around, and you'd witnessed only those two encounters, you would have had your story. Oh yes. Tory Fudge Fools No One, you might have said, or possibly something about how Euro Pincer Movement Claims Tory Candidate; and I can assure you that you would be utterly wrong.

My friends and I have now knocked on hundreds and hundreds of doors, and the Tory position on Europe is shared by the overwhelming majority. It does come up on the doorstep, incidentally — about one in seven or eight people raises it spontaneously, and most people are with the Tories. That is to say, they are somewhere between the federalist in shorts and the enrage Ukipper. Almost everyone else sees the massive, marmoreal, monumental wisdom of the Tory case: that there is no need to surrender our ability to control macroeconomic policy; that the pound should stay; that the Treaty of Nice could do with improvement; and yet they can see the need to stay within the EU.

It is a good policy, a policy hardened and tempered in the crucible of the old Tory feuds. It is winning the Tories votes in these last few days of the campaign. It is certainly solidifying the intentions of what they call 'core' Tory supporters. And it is right.

The other day I was having a tough time of it on a street corner in Thame. 'You're all the same!' a big, worked-up fellow was saying, froth flecking his chops. 'You promise everything, and you can't do anything. You'll be the same. You'll go to Westminster and you'll get your apartment paid for by the taxpayer, and you'll do bugger all. .

Well, I might have responded, had I been feeling more energetic: you think MPs are already impotent. Think ahead a decade or so to the time when not just monetary policy but fiscal policy is settled by the organs of the EU. That's right, pal, your taxes — the things Lionel Jospin wants to harmonise. Then you'll wonder why we bother to have MPs at all, when they can't even settle your rates of taxation. Then you'll be sorry you didn't vote Tory in 2001. Then you'll regret the draining of our democratic lifeblood, sucked out by the lampreys of Brussels and Frankfurt and Strasbaaargh — and of course, at that point, my handlers would have hauled me off.

You're wasting your time, they would have said, because it is rule number one of canvassing that you do not engage in long, polemical discussions with people who have made up their minds against you. I believe my — our points about Europe are unbeatable. They are like a series of aces by some beanpole Croat. But you know and I know that the election won't be won on the strength of them, or not on them alone.

You have been watching the polls, and Blair has been watching the polls, like an optimistic vulture looking at a straggling wildebeest. He wants not just to win, but to destroy the Tory party, and I feel strongly (of course I do) that his ambitions are odious. In the next week the Tories need to demonstrate that they have the deeply meditated tactics not just to ameliorate the mess in Brussels, but to provide a better government for what journalists call 'real people' who care about 'real issues' in the 'real world'. And I believe (of course I do) that the Tories are just so equipped.

Like many of my generation, I probably became conscious of Tory feelings while at school in 1982, when apathetically discussing the Falklands, and it suddenly occurred to me that it was damn fine and damn right of Mrs Thatcher to want to take them back. But over the last few weeks I have shaken the hands of dozens of people who became Tories — and are staying Tory — because of other brave things done by the Mummy and her successors.

'The Tories let us buy our house,' said one woman, 'and always stick with them.' That is, as the old Lufthansa advertisements used to say, an authentic statement; and it reflects something that we have perhaps been in danger of forgetting, and which it would be a good idea to remind everyone of in the next few days. The Tories are the party of — if you'll forgive the cantish terms — aspiration and opportunity and giving people the chance to take control of their lives.

They did it with share ownership, and small businesses and housing. But there are areas where the Tories did not dare to promote the revolution, and these are the policies which are — so the polls say — fundamental to this election; where the individual is treated with Soviet contempt, where rationing is by queue, and where the idea of choice is a joke.

There is no other country in Europe, or perhaps even the Western World, where the Prime Minister could be waylaid by the common-law wife of a cancer patient and publicly harangued about the deficiencies in his treatment, and where everyone could agree in a numb, unthinking way that, yes, it jolly well was the Prime Minister's fault, and good for her for socking it to him.

Anyone who has reported from the Continent of Europe will have observed three things about our friends and partners: a) they spend more per capita on health than we do; b) they live longer, have a higher chance of surviving cancer, cardiac arrest, etc; c) they do not rely on a quasimonopoly state supplier of healthcare. We are in denial in this country. We think we are the possessors of a proud, freebooting Anglo-Saxon economy. But in health care we are the most socialistic and equalityobsessed nation in Europe, and that, very largely, is why the NHS is so unsatisfactory, and sometimes disastrous.

It looks reasonable to us in Britain for the loved ones of cancer patients to scream at the Prime Minister, because the British government takes far more direct responsibility for health care than other European governments.

In 1998, only 1.1 per cent of total spending in Britain was private. In Germany, by contrast. the Germany we look down on for its allegedly Rhenish, statist approach, the share was 2.7 per cent. And in order to get up to German levels of spending on health, we would have to increase the budget by about .E40 billion a year. As it is, even Gordon Brown's water-cannon spending programme involves an increase of only a quarter of that amount. So isn't it time, to use the kind of ghastly language we might hear from the Liberal Democrats, that we had an 'honest dialogue' with the electorate?

It hasn't worked over the last four years. Why should it work over the next four years? Perhaps that extra money should come not just from taxation but from the kind of insurance-based schemes they have on the Continent. Perhaps, if you allowed us to pay more directly for our health care as well as in tax (and it's all our money, one way or another), we'd get better results.

Perhaps we wouldn't be treated as serfs and dolts, to be shuffled forwards and backwards on trolleys in the hope of meeting some target or quota. The Tories have flourished when they have tried to free people from state captivity. Is it really so unthinkable that the next Tory revolution should be a consumerist revolution in the public services?

Labour extols the Continental model. It is clearly Tony and Gordon's intention so to ply us with taxes and regulation that in due course we become a kind of bigger Belgium: high tax, high cost, and rife with the consequent dodges and fraud. The paradox is that Labour is missing the real lessons from the rest of Europe. Instead of encouraging medical insurance, as our neighbours do. Labour Luddites have been trying to stamp it out. They scrapped the tax break for the elderly; they persecute consultants who do private work, neatly demotivating many young, ambitious doctors.

The Tories have a better plan: to continue to pay for the NHS, not out of guilt but in the confidence that in time it can be reformed in such a way as to liberate the population from the humiliation and servitude of socialist medicine. Similar pOints might be made about education, or about nursing care for the elderly. Yes, we need public money spent on the services we all want; but we also need a serious, solid, one-nation Tory party to begin the work of reform.

My friends, colleagues, you faithful, faithful few who have reached this peroration, we Tories are right about Europe. We are dead right. We are right about law and order and the constitution and we are right about the IR35 tax and about much else. I urge you to believe that we may also be right on those questions where, traditionally, we are trusted least. If you want a government that bumbles on with the old methods, which excites not so much admiration in other EU countries as horror and derision, then vote Labour or Liberal Democrat. If not, then do the right thing on Thursday.