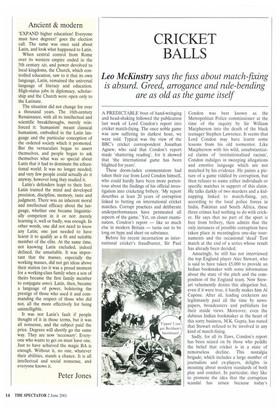 'EXPAND higher education! Everyone must have degrees!' goes the election call. The same was once said about Latin, and look what happened to Latin.

When central control from Rome over its western empire ended in the 5th century AD, and power devolved to local kingdoms, the Church, which controlled education, saw to it that its own language, Latin, remained the universal language of literacy and education. High-status jobs in diplomacy, scholarship and the Church were open only to the Latinate.

The situation did not change for over a thousand years. The 16th-century Renaissance, with all its intellectual and scientific breakthroughs, merely reinforced it: 'humanism' meant classical humanism, embodied in the Latin language and the particular conception of the ordered society which it promoted. But the vernaculars began to assert themselves, and people began to ask themselves what was so special about Latin that it had to dominate the educational world. It was no longer needed; and very few people could actually do it anyway, however long they studied it.

Latin's defenders leapt to their feet. Latin trained the mind and developed precision, discipline, memory, taste and judgment. There was an inherent moral and intellectual efficacy about the language, whether one became linguistically competent in it or not: merely learning it, well or badly, was enough. In other words, one did not need to know any Latin; one just needed to have learnt it to qualify as a fit and suitable member of the elite. At the same time, not knowing Latin excluded, indeed defined, the unsuitable. It was important that the masses, especially the working masses, did not get ideas above their station (so it was a proud moment for a working-class family when a son of theirs became the first family member to conjugate amo). Latin, then, became a language of power, bolstering the prestige of those who used it and commanding the respect of those who did not, all the more effectively for being unintelligible.

It was not Latin's fault if people thought of it in those terms, but it was all nonsense, and the subject paid the price. Degrees will shortly go the same way. They are now 'necessary'. Everyone who wants to get on must have one. Just to have achieved the magic BA is enough. Without it, no one, whatever their abilities, stands a chance. It is all intellectual and social nonsense, and everyone knows it.