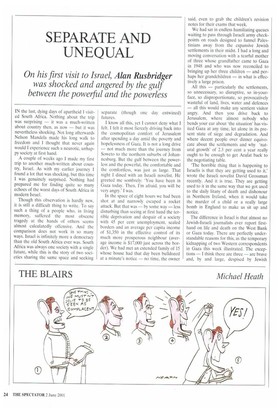 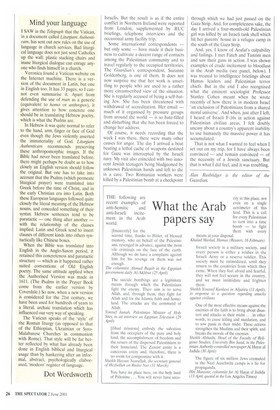 On his first visit to Israel, Alan Rusbridger

IN the last, dying days of apartheid I visited South Africa. Nothing about the trip was surprising — it was a much-written about country then, as now — but it was nevertheless shocking. Not long afterwards Nelson Mandela made his long walk to freedom and I thought that never again would I experience such a neurotic, unhappy society at first hand.

A couple of weeks ago I made my first trip to another much-written about country, Israel. As with my earlier journey I found a lot that was shocking, but this time I was genuinely surprised. Nothing had prepared me for finding quite so many echoes of the worst days of South Africa in modern Israel.

Though this observation is hardly new, it is still a difficult thing to write. To say such a thing of a people who, in living memory, suffered the most obscene tragedy at the hands of others seems almost calculatedly offensive. And the comparison does not work in so many ways. Israel is infinitely more a democracy than the old South Africa ever was. South Africa was always one society with a single future, while this is the story of two societies sharing the same space and seeking separate (though one day entwined) futures.

I know all this, yet I cannot deny what I felt. I felt it most fiercely driving back into the cosmopolitan comfort of Jerusalem after spending a day amid the poverty and hopelessness of Gaza. It is not a long drive — not much more than the journey from Soweto to the northern suburbs of Johannesburg. But the gulf between the powerless and the powerful, the comfortable and the comfortless, was just as large. That night I dined with an Israeli novelist. He greeted me sombrely: 'You have been in Gaza today. Then, I'm afraid, you will be very angry.' I was.

In the space of eight hours we had been shot at and narrowly escaped a rocket attack. But that was — by some way — less disturbing than seeing at first hand the terrible deprivation and despair of a society with 45 per cent unemployment, sealed borders and an average per capita income of $1,350 in the effective control of its much more prosperous neighbour (average income is $17,000 just across the border). We had met an extended family of 15 whose house had that day been bulldozed at a minute's notice — no time, the owner said, even to grab the children's revision notes for their exams that week.

We had sat in endless humiliating queues waiting to pass through Israeli army checkpoints on roads designed to funnel Palestinians away from the expansive Jewish settlements in their midst. I had a long and moving conversation with a tearful mother of three whose grandfather came to Gaza in 1948 and who was now reconciled to bringing up her three children — and perhaps her grandchildren — in what is effectively a large prison.

All this — particularly the settlements, so unnecessary, so disruptive, so in-yourface, so disproportionate, so provocatively wasteful of land, lives, water and defences — all this would make any sentient visitor angry. And then you drive back to Jerusalem, where almost nobody who bends your ear about 'the situation' has visited Gaza at any time, let alone in its present state of siege and degradation. And where decent people over dinner equivocate about the settlements and why 'natural growth' of 2.3 per cent a year really ought to be enough to get Arafat back to the negotiating table.

'The horrible thing that is happening to Israelis is that they are getting used to it,' wrote the Israeli novelist David Grossman recently. And it is true. They are getting used to it in the same way that we got used to the daily litany of death and dishonour in Northern Ireland, when it would take the murder of a child or a really large bomb in England to make us sit up and notice.

The difference in Israel is that almost no Jewish-Israeli journalists ever report firsthand on life and death on the West Bank or Gaza today. There are perfectly understandable reasons for this, as the temporary kidnapping of two Western correspondents in Gaza this week illustrated. The exceptions — I think there are three — are brave and, by and large, despised by Jewish Israelis. But the result is as if the entire conflict in Northern Ireland were reported from London, supplemented by RUC briefings, telephone interviews and the occasional army facility trip.

Some international correspondents — but only some — have made it their business to cultivate a decent range of contacts among the Palestinian community and to travel regularly to the occupied territories. The Guardian's correspondent, Suzanne Goldenberg, is one of them. It does not now surprise me that her work is unsettling to people who are used to a rather more circumscribed view of the situation. She is regularly accused of being a self-hating Jew. She has been threatened with withdrawal of accreditation. Her email — much of it organised by pressure groups from around the world — is so hate-filled and disturbing that she has been forced to change her address.

Of course, it needs recording that the week I was there, there were many other causes for anger. The day I arrived a boat bearing a lethal cache of weapons destined for Gaza was intercepted by the Israeli navy. My visit also coincided with two innocent Jewish teenagers being bludgeoned by unknown Palestinian hands and left to die in a cave. Two Romanian workers were killed by a Palestinian bomb at a checkpoint through which we had just passed on the Gaza Strip. And, for completeness sake, the day I arrived a four-month-old Palestinian girl was killed by an Israeli tank shell which hit her parents' house in a refugee camp in the south of the Gaza Strip.

And. yes, I know of Arafat's culpability and failings. I met Fateh and Tanzim men and saw their guns in action. I was shown examples of crude incitement to bloodlust in the Arab media (see panel, below). I was treated to intelligence briefings about Hamas leaders and Palestinian terror chiefs. But in the end I also recognised what the eminent sociologist Professor Stanley Cohen meant when he wrote recently of how there is in modern Israel 'an exclusion of Palestinians from a shared moral universe'. And when, just after I left, I heard of Israeli F-16s in action against Palestinian civilian areas, I felt doubly uneasy about a country's apparent inability to use humanely the massive power it has accumulated.

That is not what I wanted to feel when I set out on my trip, for I have always been convinced — and remain convinced — of the necessity of a Jewish sanctuary. But that is what I did feel, and it was troubling.

Alan Rusbridger is the editor of the Guardian.