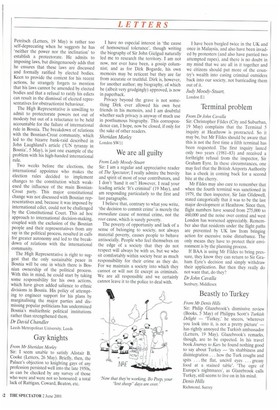 From Dr John Cavalla Sir: Christopher Fildes (City and Suburban, 19 May) complains that the Terminal 5 inquiry at Heathrow is protracted. So it may be, but Mr Fildes should be aware that this is not the first time a fifth terminal has been requested. The first inquiry lasted only two years (1981-83) and received a forthright refusal from the inspector, Sir Graham Eyre. In these circumstances, one may feel that the British Airports Authority has a cheek in coming back for a second bite at the cherry.

Mr Fildes may also care to remember that when the fourth terminal was sanctioned in 1979, the then inspector, Sir lain Glidewell, stated categorically that it was to be the last major development at Heathrow. Since then, flight numbers have soared from 275,000 to 460,000 and the noise over central and west London has worsened appreciably. Remember also that residents under the flight paths are prevented by UK law from bringing action for excessive noise disturbance. The only means they have to protect their environment is by the planning process.

If BAA is using Mr Fildes to bring pressure, they know they can return to Sir Graham Eyre's decision and simply withdraw their application. But then they really do not want that, do they?