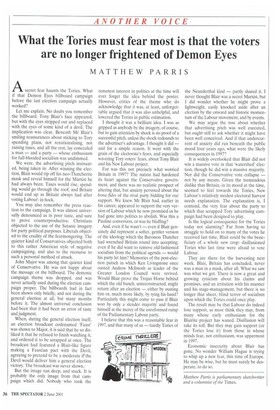 Page 36, 2 June 2001 — What the Tories must fear most is that the voters are no longer frightened of Demon Eyes
Close

Asecret fear haunts the Tories. What if that Demon Eyes billboard campaign before the last election campaign actually worked?

Let me explain. No doubt you remember the billboard. Tony Blair's face appeared, but with the eyes stripped out and replaced with the eyes of some kind of a devil. The implication was clear. Beneath Mr Blair's smiling reassurances about sticking to Tory spending plans, not renationalising, not raising taxes, and all the rest, lay concealed a man — and a party — whose enthusiasm for full-blooded socialism was undimmed.

We were, the advertising pitch insinuated, being taken in. After winning the election, Blair would rip off his neo-Thatcherite mask and reveal himself for the Marxist he had always been. Taxes would rise, spending would go through the roof, and Britain would end up as Britain always had after voting Labour: in hock.

You may also remember the press reaction to the campaign. It was almost universally denounced as in poor taste, and sure to prove counterproductive. Christians objected to the use of the Satanic imagery for party political purposes. Liberals objected to the crudity of the fearmongering. The quieter kind of Conservatives objected both to this rather American style of negative campaigning, and also to the recourse to such a personal method of attack.

John Major was among that quieter kind of Conservative. He was not happy about the message or the billboard. The demonic campaign theme was dropped, and was never actually used during the election campaign proper. The billboards had in fact been shown only briefly, and not during the general election at all, but many months before it. The almost universal conclusion had been that it had been an error of taste and judgment.

When, during the general election itself, an election broadcast codenamed 'Faust' was shown to Major, it is said that he so disliked it that he refused to finish watching it, and ordered it to be scrapped at once. The broadcast had featured a Blair-like figure making a Faustian pact with the Devil, agreeing to pretend to be a moderate if the Devil would deliver him a general election victory. The broadcast was never shown.

But the image ran deep, and stuck. It is probably the only image from that campaign which did. Nobody who took the remotest interest in politics at the time will ever forget the idea behind the poster. However, critics of the theme who do acknowledge that it was, at least, unforgettable argued that it was also unhelpful, and lowered the Tories in public estimation.

I thought it was a brilliant idea. I was as gripped as anybody by the imagery, of course, but to gain attention by shock is no proof of a successful pitch, unless the shock redounds to the advertiser's advantage. I thought it did — and for a simple reason. It went with the grain of the electorate's fears, and especially wavering Tory voters' fears, about Tony Blair and his New Labour project.

For was this not precisely what worried Britain in 1997? The nation had hardened its heart against the Conservative government, and there was no realistic prospect of altering that, but anxiety persisted about the bona fides of the rival party bidding for our support. We knew Mr Blair had, earlier in his career, appeared to support the very version of Labour which he now promised us he had gone into politics to abolish. Was this a Pauline conversion, or was he bluffing?

And, even if he wasn't — even if Blair genuinely did represent a softer, gentler version of the ideology which the Baroness Thatcher had wrenched Britain round into accepting; even if he did want to remove old-fashioned socialism from the political agenda — would his party let him? Memories of the post-election putsch in which Ken Livingstone once ousted Andrew McIntosh as leader of the Greater London Council were revived. Would Blair prove the Trojan Horse behind which the old bunch, unreconstructed, might return after an election — either by ousting him or, much more likely, by tying his hand? Particularly this might come to pass if Blair won by only a slender majority' and found himself at the mercy of the unreformed rump of the Parliamentary Labour party.

I believe that this was a reasonable fear in 1997, and that many of us — hardly Tories of the Neanderthal kind — partly shared it. I never thought Blair was a secret Marxist, but I did wonder whether he might prove a lightweight, easily knocked aside after an election by the onward and historic momentum of the Labour movement and by events.

We may argue the toss about whether that advertising pitch was well executed, but ought still to ask whether it might have been well conceived. And if that undercurrent of anxiety did run beneath the public mood four years ago, what were the likely consequences in 1997?

It is widely overlooked that Blair did not win a massive vote in that 'watershed' election, though he did win a massive majority. Nor did the Conservative vote collapse — not by any means. Given the tremendous dislike that Britain, in its mood at the time, seemed to feel towards the Tories, New Labour's relatively modest electoral harvest needs explanation. The explanation is, I contend, the very fear about the party to which that scrapped Tory advertising campaign had been designed to play.

Is the logical consequence for the Tories today not alarming? Far from having to struggle to hold on to many of the votes he received last time, Blair could be the beneficiary of a whole new crop: disillusioned Tories who last time were afraid to vote Labour.

They are there for the harvesting next week. Blair, Britain has concluded, never was a man in a mask, after all. What we saw was what we got. There is now a great and growing cynicism about his claims and promises, and an irritation with his manner and his stage-management, but there is no longer that sheer, blind terror of socialism upon which the Tories could once play.

The result may be that Labour do indeed lose support, as most think they may, from many whose early enthusiasm for the Blairite project has waned. Disillusion will take its toll. But they may gain support (or the Tories lose it) from those in whose minds fear, not enthusiasm, was uppermost in 1997.

Economic insecurity about Blair has gone. No wonder William Hague is trying to whip up a new fear, this time of Europe. He may be wise, but he must surely be desperate, to do so.