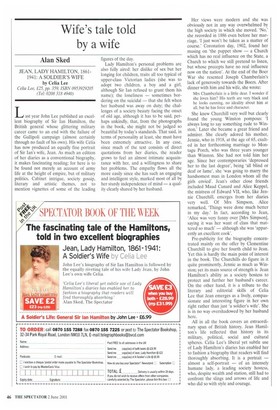 Wife's tale told by a wife

JEAN, LADY HAMILTON, 18611941: A SOLDIER'S WIFE by Celia Lee Celia Lee, £25, pp. 359, ISBN 0953929205 (Tel: 0208 318 4940) Last year John Lee published an excellent biography of Sir Ian Hamilton, the British general whose glittering military career came to an end with the failure of the Gallipoli campaign (almost certainly through no fault of his own). His wife Celia has now produced an equally fine portrait of Sir Ian's wife, Jean. As much an edition of her diaries as a conventional biography, it makes fascinating reading; for here is to be found not merely an account of army life at the height of empire, but of military politics, Cabinet intrigue, society gossip, literary and artistic themes, not to mention vignettes of some of the leading

figures of the day.

Lady Hamilton's personal problems are also fully aired: her dislike of sex but her longing for children, traits all too typical of upper-class Victorian ladies (she was to adopt two children, a boy and a girl, although Sir Ian refused to grant them his name); the loneliness — sometimes bordering on the suicidal — that she felt when her husband was away on duty; the challenges of a society beauty facing the onset of old age, although it has to be said, perhaps unkindly, that, from the photographs in the book, she might not be judged so beautiful by today's standards. That said, in terms of personality at least, she must have been extremely attractive. In any case, since much of the text consists of direct quotations from her diaries, the reader grows to feel an almost intimate acquaintance with her, and a willingness to share her problems. The empathy flows all the more easily since she has such an engaging and intelligent style, marked most of all by her sturdy independence of mind — a quality clearly shared by her husband. Her views were modern and she was obviously not in any way overwhelmed by the high society in which she moved. 'No,' she recorded in 1886 even before her marriage, 'I just won't be taken as a matter of course.' Coronation day, 1902, found her musing on 'the puppet show — a Church which has no real influence on the State, a Church to which we still pretend to listen, but whose precepts have no real influence now on the nation'. At the end of the Boer War she resented Joseph Chamberlain's lack of generosity towards the Boers. After dinner with him and his wife, she wrote: Mrs Chamberlain is a little dear. I wonder if she loves him? His teeth are very black and he looks cunning, no ideality about him at all, but he has force and character.

She knew Churchill very well but clearly found the young •Winston pompous: 'I always long to say something rude to Winston.' Later she became a great friend and admirer. She clearly adored his mother, Jennie, who in 1918, at the age of 65, exulted in her forthcoming marriage to Montagu Porch, who was three years younger than Winston. She had not told him her age. Since her contemporaries 'depressed her to the last degree', being 'all blind or deaf or lame'. she 'was going to marry the handsomest man in London whom all the girls envied'. Jean's other close friends included Maud Cunard and Alice Keppel, the mistress of Edward VII, who, like Jennie Churchill, emerges from her diaries very well. Of Mrs Simpson, Alice remarked, 'Things were done much better in my day.' In fact, according to Jean, 'Alice was very funny over [Mrs Simpson], saying it was her want of class that mattered so much' — although she was 'apparently an excellent cook'.

Pre-publicity for the biography concentrated mainly on the offer by Clementine Churchill to give her fourth child to Jean. Yet this is hardly the main point of interest in the book. The Churchills do figure in it quite prominently, Jennie as much as Winston; yet its main source of strength is Jean Hamilton's ability as a society hostess to protect and further her husband's career. On the other hand, it is a tribute to the literary and editorial skills of Celia Lee that Jean emerges as a lively, compassionate and interesting figure in her own right rather than just 'a soldier's wife'. She is in no way overshadowed by her husband here.

All in all the book covers an extraordinary span of British history. Jean Hamilton's life reflected that history in its military, political, social and cultural spheres. Celia Lee's liberal yet subtle use of Lady Hamilton's diaries has enabled her to fashion a biography that readers will find thoroughly absorbing. It is a portrait — almost a self-portrait — of an intensely humane lady, a leading society hostess, who, despite wealth and station, still had to confront the slings and arrows of life and who did so with style and courage.