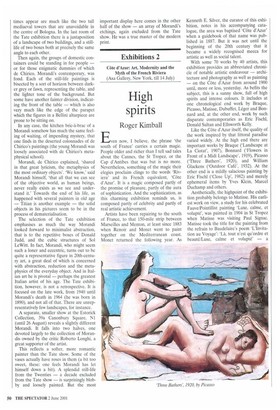 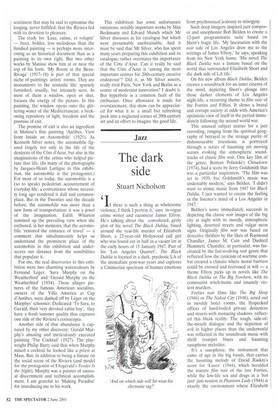 Even now, I believe, the phrase 'the south of France' carries a certain magic. People older and richer than I tell sad tales about the Cannes, the St Tropez, or the Cap d'Antibes that was but is no more. Nevertheless, something of the magic their elegies proclaim clings to the words `Riviera' and its French equivalent, `Ctite d'Azur'. It is a magic composed partly of the promise of pleasure, partly of the aura of sophistication. And the sophistication, as this charming exhibition reminds us, is composed partly of celebrity and partly of real artistic achievement.

Artists have been repairing to the south of France, to that 150-mile strip between Marseilles and Menton, at least since 1883 when Renoir and Monet went to paint together on the Mediterranean coast. Monet returned the following year. As Kenneth E. Silver, the curator of this exhibition, notes in his accompanying catalogue, the area was baptised 'Cote d'Azur' when a guidebook of that name was published in 1887. But it was not until the beginning of the 20th century that it became a widely recognised mecca for artistic as well as social talent.

With some 70 works by 40 artists, this exhibition provides an abbreviated chronicle of notable artistic endeavour — architecture and photography as well as painting — on the COte d'Azur from around 1900 until, more or less, yesterday. As befits the subject, this is a sunny show, full of high spirits and intense colours. It includes at one chronological end work by Braque, Picasso, Matisse, Dubuffet, Leger and Bonnard and, at the other end, work by such disparate contemporaries as Eric Fischl, Donald Sultan and Ellsworth Kelly.

Like the Cote d'Azur itself, the quality of the work inspired by that littoral paradise varied widely. At the high end there are important works by Braque ('Landscape at La Ciotat', 1907), Bonnard (`Flowers in Front of a Midi Landscape', 1919), Picasso (`Three Bathers', 1920), and William Glackens ('Outdoor Café', 1932). At the other end is a mildly salacious painting by Eric Fischl ('Close Up', 1982) and merely ephemeral items by Yves Klein, Marcel Duchamp and others.

Aesthetically, the highpoint of the exhibition probably belongs to Matisse. His earliest work on view, a study for his celebrated Fauve/Pointillist painting 'Luxe, calme, et volupte', was painted in 1904 in St Tropez when Matisse was visiting Paul Signac. Matisse took the title for the painting from the refrain to Baudelaire's poem `L'Invita

don au Voyage': tout n'est qu'ordre et beaute/Luxe, calme et volupte' — a sentiment that may be said to epitomise the longing, never fulfilled, that the Riviera fed with its devotion to pleasure.

The study for 'Luxe, calme, et volupte — freer, bolder, less melodious than the finished painting — is perhaps more interesting as an historical document than as a painting in its own right. But two other works by Matisse show him at or near the top of his form. 'My Room at the BeauRivage' (1917-18) is part of that special niche of paintings: artists' rooms. They are monuments to the nomadic life: sparsely furnished, usually, but intensely seen. In most of them a window, open or shut, focuses the energy of the picture. In this painting, the window opens onto the glittering water of the Mediterranean: a beckoning repository of light, freedom and the promise of exit.

The promise of exit is also an ingredient in Matisse's fine painting 'Antibes, View from Inside an Automobile' (1925). As Kenneth Silver notes, the automobile figured largely not only in the life of the denizens of the Cote d'Azur, but also in the imaginations of the artists who helped picture that life. (In many of the photographs by Jacques-Henri Lartigue in this exhibition, the automobile is the protagonist.) For most of us today, the automobile is a (so to speak) pedestrian accoutrement of everyday life: a convenience whose necessity long ago rendered it dull and commonplace. But in the Twenties and the decade before, the automobile was more than a new form of transportation: it was a jewel of the imagination. Edith Wharton summed up the prevailing view when she enthused, in her memoirs, that the automobile 'restored the romance of travel' — a comment that simultaneously helps us understand the prominent place of the automobile in this exhibition and underscores our distance from the sensibilities that populate it.

For me, the real discoveries in this exhibition were two charming watercolours by Fernand Uger, 'Sara Murphy on the Weatherbird' and 'Gerald Murphy on the Weatherbird' (1934). These allegro pictures of the famous American socialites, owners of the Villa America at Cap d'Antibes, were dashed off by Leger on the Murphys' schooner. Dedicated 'To Sara, to Gerald, their very devoted cabin boy', they have a fresh summer quality that captures one side of the RMera's cornucopia.

Another side of that abundance is captured by my other discovery: Gerald Murphy's amusing and meticulously executed painting 'The Cocktail' (1927). The playwright Philip Barry said that when Murphy mixed a cocktail he looked like a priest at Mass. But, in addition to being a fixture on the social scene of the Riviera (and model for the protagonist of Fitzgerald's Tender Is the Night), Murphy was a painter of unusual discernment and technical accomplishment. I am grateful to 'Making Paradise' for introducing me to his work. This exhibition has some unfortunate omissions, notably important works by Max Beckmann and Edvard Munch which Mr Silver discusses in his catalogue but which were presumably unobtainable. And it must be said that Mr Silver, who has spent many years preparing this exhibition and its catalogue, rather overstates the importance of the Cote d'Azur. Can it really be said that the Cote d'Azur is 'among the most important centres for 20th-century creative endeavour'? Did it, as Mr Silver asserts, really rival Paris, New York and Berlin as a centre of modernist innovation? I doubt it. But hyperbole is a common fault of the enthusiast. Once allowance is made for overstatement, this show can be appreciated for what it is: a small but refreshing peek into a neglected corner of 20th-century art and an effort to imagine the good life.