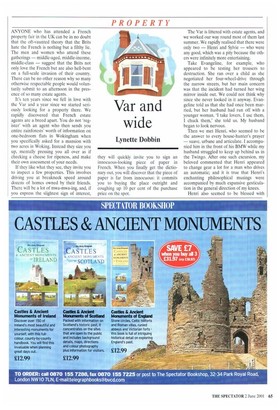 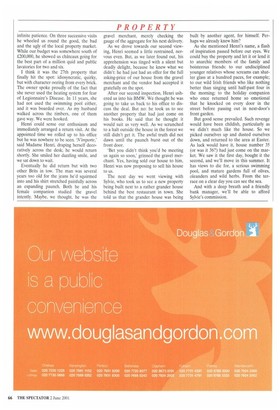 ANYONE who has attended a French property fair in the UK can be in no doubt that the oft-vaunted theory that the Brits hate the French is nothing but a filthy lie. The men and women who attend these gatherings — middle-aged, middle-income, middle-class — suggest that the Brits not only love the French but are also hell-bent on a full-scale invasion of their country. There can be no other reason why so many otherwise respectable people would voluntarily submit to an afternoon in the presence of so many estate agents.

It's ten years since we fell in love with the Var and a year since we started seriously looking for a property there. We rapidly discovered that French estate agents are a breed apart. You do not 'register' with an agent who then sends you entire rainforests' worth of information on one-bedroom flats in Wokingham when you specifically asked for a mansion with two acres in Woking. Instead they size you up, mentally pressing you all over as if checking a cheese for ripeness, and make their own assessment of your needs.

If they like what they see, they invite you to inspect a few properties. This involves driving you at breakneck speed around dozens of homes owned by their friends. There will be a lot of mwa-mwa-ing, and, if you express the slightest sign of interest, they will quickly invite you to sign an innocuous-looking piece of paper in French. When you finally get the dictionary out, you will discover that the piece of paper is far from innocuous: it commits you to buying the place outright and coughing up 10 per cent of the purchase price on the spot. The Var is littered with estate agents, and we worked our way round most of them last summer. We rapidly realised that there were only two — Henri and Sylvie — who were • any good, which was a pity because the others were infinitely more entertaining.

Take Evangeline, for example, who appeared to be testing her trousers to destruction. She ran over a child as she negotiated her four-wheel-drive through the narrow streets, but her main concern was that the incident had turned her wing mirror inside out. We could not think why since she never looked in it anyway. Evangeline told us that she had once been married, but her husband had run off with a younger woman. 'I take lovers, I use them, I chuck them,' she told us. My husband began to look nervous.

Then we met Henri, who seemed to be the answer to every house-hunter's prayer — suave, urbane and articulate. I accompanied him in the front of his BMW while my husband struggled to keep up behind us in the Twingo. After one such excursion, my beloved commented that Henri appeared to change gear a lot for a man who drives an automatic; and it is true that Henri's enchanting philosophical musings were accompanied by much expansive gesticulation in the general direction of my knees.

Henri also seemed to be blessed with infinite patience. On three successive visits he wheeled us round the good, the bad and the ugly of the local property market. While our budget was somewhere south of £200,000, he showed us châteaux going for the best part of a million quid and public lavatories for two and six.

I think it was the 27th property that finally hit the spot: idiosyncratic, quirky, but with character oozing from every brick. The owner spoke proudly of the fact that she never used the heating system for fear of Legionnaire's Disease. In 11 years, she had not used the swimming pool either, and it was boarded over. As my husband walked across the timbers, one of them gave way. We were hooked.

Henri could sense our enthusiasm and immediately arranged a return visit. At the appointed time we rolled up to his office but he was nowhere to be seen. W'importe,' said Madame Henri, draping herself decoratively across the desk; he would return shortly. She smiled her dazzling smile, and we sat down to wait.

Eventually he did return but with two other Brits in tow. The man was several years too old for the jeans he'd squirmed into and his shirt stretched painfully across an expanding paunch. Both he and his female companion studied the gravel intently. Maybe, we thought, he was the gravel merchant, merely checking the gauge of the aggregate for his next delivery.

As we drove towards our second viewing, Henri seemed a little restrained, nervous even. But, as we later found out, his apprehension was tinged with a silent but deadly delight, because he knew what we didn't: he had just had an offer for the full asking-price of our house from the gravel merchant and the vendor had accepted it gratefully on the spot.

After our second inspection, Henri ushered us into his BMW. We thought he was going to take us back to his office to discuss the deal. But no: he took us to see another property that had just come on his books. He said that he thought it would suit us very well. As we scrunched to a halt outside the house in the forest we still didn't get it. The awful truth did not dawn until the paunch burst out of the front door.

'Bet you didn't think you'd be meeting us again so soon,' grinned the gravel merchant. Yes, having sold our house to him, Henri was now proposing to sell his house to us.

The next day we went viewing with Sy!vie, who took us to see a new property being built next to a rather grander house behind the best restaurant in town. She told us that the grander house was being built by another agent, for himself. Perhaps we already knew him?

As she mentioned Henri's name, a flash of inspiration passed before our eyes. We could buy the property and let it or lend it to anarchic members of the family and boisterous friends: to our undisciplined younger relatives whose screams can shatter glass at a hundred paces, for example; to our wild Irish friends who like nothing better than singing until half-past four in the morning; to the holiday companion who once returned home so emotional that he knocked on every door in the street before passing out in next-door's front garden.

But good sense prevailed. Such revenge would have been childish, particularly as we didn't much like the house. So we picked ourselves up and dusted ourselves down, and returned to the area at Easter. As luck would have it, house number 35 (or was it 36?) had just come on the market. We saw it the first day, bought it the second, and we'll move in this summer. It has views to die for, a serious swimming pool, and mature gardens full of olives, oleanders and wild herbs. From the terrace on a clear day you can see the sea.

And with a deep breath and a friendly bank manager, we'll be able to afford Sylvie's commission.