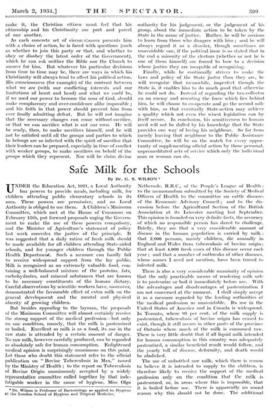 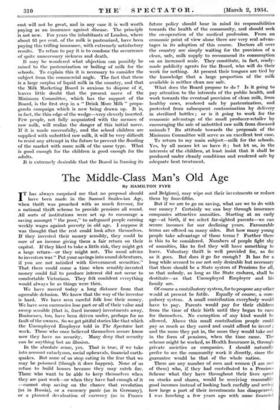 Safe Milk for the Schools

UNDER the Education Act, 1921, a Local Authority has powers to provide meals, including milk, for children attending public elementary schools in its area. These powers are permissive, and no Local Authority is obliged to use them. A Children's Minimum Committee, which met at the House of Commons on February 15th, put forward proposals urging the Govern- ment to make the use of these powers compulsory, and the Minister of Agriculture's statement of policy last week concedes the justice of the principle. It was suggested that a daily ration of fresh milk should be made available for all children attending State-aided schools, and for younger children through the Public Health Department. Such a measure can hardly fail to receive widespread support from the lay public. Milk is recognized as an- extremely valuable food, con- taining a well-balanced mixture of the proteins, fats, carbohydrates, and mineral substances that are known to be necessary constituents of the human dietary. Careful observations by scientific workers have, moreover, demonstrated the favourable effect of extra milk on the general development and the mental and physical alacrity of growing children.

But besides appealing to the layman, the proposals of the Minimum Committee will almost certainly receive the strong support of the medical profession—but only on one condition, namely, that the milk is pasteurized or boiled. Excellent as milk is as a food, its use in the raw state is attended by a certain amount of danger. No raw milk, however carefully produced, can be regarded as absolutely safe for human consumption. Enlightened medical opinion is surprisingly unanimous on this point. Let those who doubt this statement refer to the official publication on " Bovine Tuberculosis in Man," issued by the Ministry of Health ; to the report on Tuberculosis of Bovine Origin unanimously accepted by a widely representative committee called together by that inde- fatigable worker in the* cause of hygiene, Miss Olga "Dr. Wilson is Professor of Bacteriology as applied to Hygiene at the London School of Hygiene and Tropical Medicine. Nethersole, R.R.C., of the People's League of Health ; to the memorandum submitted by the Society of Medical Officers of Health to the committee on cattle diseases of the Economic Advisory Council ; and to the dis- cussion before the Agricultural Section of the British 'Association at its Leicester meeting last September. This opinion is founded on very definite facts, the accuracy of which no responsible person has dared to challenge. Briefly, they are that a very considerable amount of disease in the human population is carried by milk ; that 2,000 persons, mainly children, die annually in England and Wales from tuberculosis of bovine origin ; that at least 4,000 fresh cases of this disease occur each year ; and that a number of outbreaks of other diseases, whose names I need not mention, have been traced to infected milk.

There is also a very considerable unanimity of opinion that the only practicable means of rendering milk safe is. to pasteurize or boil it immediately before use. With the advantages and disadvantages of pasteurization I am not concerned at the moment. I shall simply accept it as a measure regarded by the leading authorities of the medical profession as unavoidable. Its use in the United States of America and in Canada is widespread. In Toronto, where 99 per cent. of the milk supply is pasteurized, tuberculosis of bovine origin has ceased to exist, though it still occurs in other parts of the province of Ontario where much of the milk is consumed raw. There is very little doubt that if all liquid milk intended for human consumption in this country was adequately pasteurized, a similar beneficial result would follow, and the yearly toll of disease; deformity, and death would be abolished.

The use of unbottled raw milk, which there is reason to believe it is intended to supply to the children, is therefore likely to receive the support of the medical profession only on the condition that the milk is pasteurized, or, in areas where this is impossible, that it is boiled before use. There is apparently no sound rea-sari why this should not be done. The additional cost will not be great, and in any case it is well worth paying as an insurance against disease. The principle is not new. For years the inhabitants of London, where about 95 per cent. of the milk is pasteurized, have been paying this trifling insurance, with extremely satisfactory results. To refuse to pay it is to condone the occurrence of quite unnecessary sickness and death.

It may be wondered what objection can possibly be raised 'to the pasteurization or boiling of milk for the schools. To explain this it is necessary to consider the subject from the commercial angle. The fact that there is a large surplus of liquid milk in the country, and that the Milk Marketing Board is anxious to dispose of it, leaves little doubt that the present move of the Minimum Committee, which has the support of the Board, is the first step in a " Drink More Milk " propa- ganda campaign which is now being drawn up. It is, in fact, the thin edge of the wedge—very cleverly inserted. Few people, not fully acquainted with the menace of raw milk, will realize the danger of this initial move. If it is made successfully, and the school children are supplied with unbottled raw milk, it will be very difficult to resist any attempt in the future to prevent the flooding of the market with more milk of the same type. What is good enough for the children is good enough for the adults.

It is extremely desirable that the Board in framing its future policy should bear in mind its responsibilities towards the health of the community, and should seek the co-operation of the medical profession. From an economic point of view alone there are- very real advan- i tages in its 'adoption of this course. Doctors all over the country are simply waiting for the provision of a clean, safe, milk supply to recommend its consumption on an increased scale. They constitute, in fact, ready- made publicity agents for the Board, who will do their work for nothing. At present their tongues are tied by the knowledge that a large proportion of the milk available is neither clean nor safe.

What does the Board propose to do ? Is it going to pay attention to the interests of the public health, and work towards the eventual provision of clean milk, from healthy cows, rendered safe by pasteurization, and protected from subsequent contamination by delivery in sterilized bottles ; or is it going to work for the economic advantage of the small producer-retailer by encouraging the sale of unbottled raw milk from diseased animals ? Its attitude towards the proposals of the Minimum Committee will serve as an excellent test case.

To return to my main subject—milk for the schools. Yes, by all means let us have it ; but let us, in the interests of the children, at least insist that it shall be produced under cleanly conditions and rendered safe by adequate heat treatment.