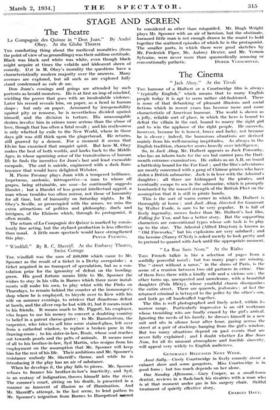 " Jack Ahoy." At the Tivoli THE humour of a Hulbert or a Courtneidge film is always " typically English," which means that to many English

people today it is apt to seem rather old-fashioned. There is none of that debunking of pleasant illusions and social fictions which in recent years has become More and more characteristic of American humour. The world is shown as a jolly, reliable sort of place, in which the hero is bound to defeat the villain in the end, bound to marry the right girl and to win the applause of the right people. He succeeds, however, because he is honest, brave and lucky, not because he is clever ; indeed, the humorous situations are derived mainly from his well-meaning ineptitudes. As always in the English tradition, character scores heavily over intelligence.

So, in Jack Ahoy, Mr. Hulbert appears as Jack Ponsonby, who has an inborn taste for the sea but cannot pass the Dart- mouth entrance examination. He enlists as an A.B. on board a battleship bound for the Far East ; and the film's adventures are mostly concerned with a gang of Chinese pirates who have stolen a British submarine. Jack is in love with the Admiral's daughter ; all three are kidnapped by the pirates, and eventually escape to sea in the submarine, which is promptly bombarded by the massed strength of the British Fleet on the assumption that it is still in pirate hands.

This is the sort of warm corner in which Mr. Hulbert is thoroughly at home ; and Jack Ahoy, directed for Gaumont by Walter Forde, is sure to be very popular. It is full of lively ingenuity, moves faster than Mr. Hulbert's last film, Falling for You, and has a better story. But the supporting characters arc conventional types whose sole task is to play up to the star. The Admiral (Alfred Drayton) is known as " Old Fireworks," but his explosions are very subdued ; and the heroine (Nancy O'Neil) is asked merely to look pretty and to pretend to quarrel with Jack until the appropriate moment.