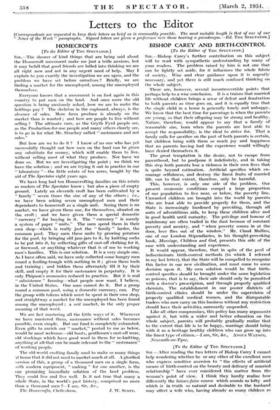 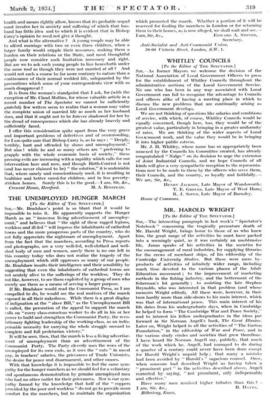 [To the Editor of THE SPECTATOR.] SIR —After reading the

two letters of Bishop Carey I -cannot help wondering whether he or any other of the excellent men who expreks sensitive aversion to " the effects of artificial means of birth-conttol. on the -beauty and delicaCY of Married relationship " have ever 'considered this matter • from the woman's point of view. I think they hardly realiie -how differently the laissez-faire course which soundi so lofty and which is in truth so natural and desirable to the huSband may affect a- Wife who,- having already as many Children as

health and means rightly allow, knows that its probable sequel must involve her in anxiety and suffering of *which that hus- band has little idea and to which it is evident that in Bishop Carey'S opinion he need not give a.thought. And what is the alternative ? A young couple may be able to afford marriage with two or even three children, when a larger family would cripple their resources, making them a burden on their relations or the State, and most thoughtful people now consider such limitation necessary and right. But are we to ask such young people to live henceforth under the same roof as though they were not married at all ? And would not such a course be far more contrary to nature than a continuance of their normal wedded life, safeguarded by the precautions which some of your correspondents 'view with so much disapproval?:

It is from the woman's standpoint that I ask, for (with the exception of Mr. Claud Mullins, for whose valuable article in a recent number of The Spectator we cannot be sufficiently grateful) few writers seem to realize that a woman may value the complete union of married life as much as her husband does, and that it ought not to be forever shadowed for her by the dread. of consequences which she has already bravely and sufficiently faced.

I offer this consideration quite - apart from the very grave and important-.problems of defectives and of overcrowding, for I am quite sure that Bishop Carey is, ashe says : " Deeply, terribly, hurt and offended by slums and unemployment." But alas ! while he and so many others are ". preferring to grapple with the whole economic basis of society," these pressing. evils are increasing with a rapidity which calls for our intervention here and now, and though Birth-Control is not (and has never claimed to be) " the solution," it is undeniable that, where sanely and conscientiously used, it is resulting in healthier and better cared-for children, and in less poverty- stricken homes. Surely this is to the good.—I am, Sir, &c.,