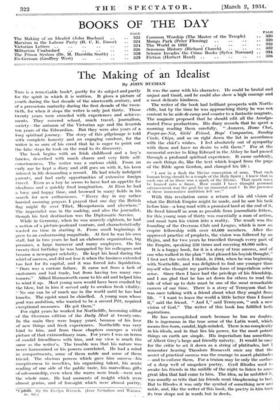 The Making of an Idealist

Tins is a renutemble book*, partly for its subject and partly for the spirit in which it is written. It gives a picture of youth during the last decade of the nineteenth century, and of a precocious maturity during the first decade of the twen- tieth, for when it stops the writer is only just thirty. Those twenty years were crowded with experiences and achieve- ments. They covered school, much travel, journalism, society—the autumn of the Victorian age and the feverish ten years of the Edwardian. But they were alio years of a long spiritual journey. The story of this pilgrimage is told with complete honesty and an engaging candour, for the writer is so sure of his. creed that he is eager to point out the false steps he took on the road to its discovery.

The book begins with an Irish childhood and a boy's fancies, described with much charm and very little self- consciousness. The writer was a curious child. From an early age he kept a diary and still goes on with it, his keen interest in life demanding a record. He had wisely indulgent parents, and had early opportunities of extensive foreign I ravel. Even as a boy he seems to have had an appetite for idealisms and a quickly fired imagination. At Eton he had a busy and happy time, and browsed in many fields in his search for new enthusiasms. " Every day in my rather hurried morning prayers I prayed that one day the British flag might fly over Tibet, Mesopotamia and elsewhere." The imperialist was in the making, and also the journalist, though his first destination was the Diplomatic Service.

While in Germany, when he-was scarcely eighteen, he had a notion of a picture-postcard venture, and characteristically wasted no time in starting it. From small beginnings it grew to an embarrassing magnitude. At first he was his own staff, but in two years he had an elaborate organization, big premises, a large turnover and many employees. On his twenty-first birthday he was banqueted by his colleagues and became a newspaper celebrity. He kept his head during the whirl of success, and did not lose it when the business extended too fast for its capital, and it was forced into liquidation. " Ours was a curious failure. It came not from a lack of customers and bad trade, but from having too many cus-; tomers." Alfred Harmsworth came to his aid and helped him to wind it up. Most young men would have been crushed by the blow, but in him it served only to awaken fresh vitality. " No one can be of much use in the world until he has had knocks. The egoist must be chiselled. A young man whose goal was ambition, who wanted to be a second Pitt, required exceptional measures. He got them."

For eight years he worked for Northcliffe, becoming editor of the Overseas edition of the Daily Mail at twenty-one. In the main they were happy yearg, because of his love of new things and. fresh experiences. Northcliffe was very kind to him, and from these chapters emerges a vivid picture of that extraordinary man. For years I was on terms of candid friendliness with hini and my view is much the same as the writer's. The trouble was that his nature was never harmonized or his powers. correlated. He had a mind in compartments, some of them noble and some of them trivial. The obvious powers which gave him success—his receptiveness to novelties, his Organiiing talent, his acute reading of one side of the public taste, his marvellous gifts of salesmanship, even when the wares were trash—were not the whole man. He had moments of .insight which were almost genius, and of foresight which were almost poetry.

It was the same with his character. He could be brutal and unjust and timid, and he could also show a high courage and a most delicate kindness.

The writer of the book had brilliant prospects with North- cliffe, but by the time he was approaching thirty he was not

content to be aide-de-camp and courier to a fantastic magnate. The magnate proposed that he should edit all the Amalga- mated Press productions. His diary records that he spent a morning reading them carefully. " Answers, Home Chat, Forget-me-Not, Girls' Friend, Boys' Companion, Sunday Circle, Chips, and so on right down the list in accordance with the chief's wishes. I feel absolutely out of sympathy with them and have no desire to edit them." For at the memorial service to King Edward in the Abbey he had passed through a profound spiritual experience. It came suddenly, as such things do, like the text which leaped from the page of the Bible upon Gordon, and changed his life : " I saw in a flash the Divine conception of man. That each human being should be a temple of the Holy Spirit ; I knew that in each one of us there was a spark of the Divine. That spark must be fanned into a flame. How could I have thought personal advancement was the goal for an immortal soul ? In the presence of these immensities ambition left me."

With this revelation came a return of his old vision of what the British Empire might be made, and he saw his task before him—a long road with a promised land at the end of it. He freed himself as soon as possible from journalistic fetters, for this young man of thirty was essentially a man of action, and must turn his vision into a reality. The result was the founding of the Overseas Club and League, which is now an empire fellowship with over 44,000 members. After the approved practice of prophets, the vision was followed by an Ilejira, and for two years he travelled through every part of the Empire, speaking 250 times and covering 64,000 miles.

It is a happy book, for it is a story of true success, and of one who walked in the plan " that pleased his boyish thought." I first met the writer, I think, in 1904, when he was beginning with Northcliffe, and was delighted to find one younger than myself who thought my particular form of imperialism sober sense. Since then I have had the privilege-of his friendship, and I am glad that he has set down for others to read the tale of what up to date must be one of the most remarkable careers of our time. There is a story of Tennyson that he was once talking with a friend about what they sought from life. " I want to leave the world a little better than I found it," said the friend. " And I," said Tennyson, " seek a new

vision of God." The writer of this book has fulfilled both aspirations.

He has accomplished much because he has no doubts.

He is ingenuous in the true sense of the Latin word, which means free-born, candid, high-minded. There is no complexity

in his ideals, and in that lies his power, for the most -potent things on earth are simple. His imperialism has something of Albert.Grey's large and friendly naivety. It would, be easy for the critic to set it down as a string of- platitudes, but I remember hearing Theodore Roosevelt .once .say that the secret of practical success was the courage to assert platitudes —and to enforce them. For a truism may be only the surface of a deep well of unspoken poetry. Cecil Rhodes used to awake his friends in the middle of the. night to listen to some great idea that had come to him. The idea, as he unfolded it, was usually so trite that his friends went blaspheming to bed. But to Rhodes it was only the symbol of something new and

noble, and, like the writer of this book, the poetry in him took its true shape not in words but in deeds.