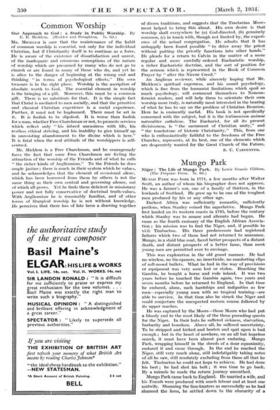 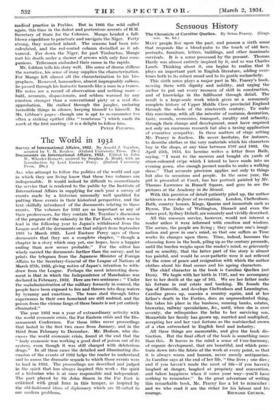 MUNGO PARK was born in 1771, a few months after Walter Scott, an author of whom his biographer does not approve. He was a farmer's son, one of a family of thirteen, in the lowlands of Scotland. He grew up to be one of the toughest men produced by his or any other age.

Darkest Africa was sufficiently romantic, sufficiently perilous, when Stanley coined the superlative. Mungo Park first landed on its western coasts in 1795, before the century which Stanley was to amaze and alienate had begun. He came as the fourth emissary of the English African Associa- tion ; his mission was to find the Niger, and, if possible to 'hit Timbuctoo. His three predecessors had registered failures which two of them had not returned to announce. Mungo, in a staid blue coat, faced better prospects of a distant death, and distant prospects of a better fame, than most young men are permitted ever to envisage.

This was exploration in the old grand manner. He had no wireless, no tin-openers, no insecticide, no comforting clips of soft-nosed bullets. What he had in the way of provisions or equipment was very soon lost or stolen. Reaching the Gambia, he bought a horse and rode inland. It was two years before he touched the Gambia again, two years and seven months before he returned to England. In that time he endured, alone, such hardships and indignities as few men—especially young men with no tropical training—are able to survive. In that time also he struck the Niger and could conjecture the unexpected eastern course followed by its upper reaches.

He was captured by the Moors—those Moors who had put a bloody end to the most likely of the three preceding quests for the Niger. In their huts he suffered sickness, starvation, barbarity and boredom. Above all, he suffered uncertainty. To be stripped and kicked and beaten and spat upon is bad enough ; but in the heart of nowhere, on an all but hopeless search, it must have been almost past enduring. Mungo Park, wrapping himself in the shreds of a dour equanimity, endured it and came through. In the end he reached the Niger, still very much alone, still indefatigably taking notes of all he saw, still resolutely excluding from them all that he felt. Timbuctoo he could not hope to achieve. He had done his best ; he had shot his bolt ; it was time to go back. By a miracle he made the return journey unscathed.

Mungo Park came back to England. He married a wife, and his Travels were produced with much labour and at least one midwife. Shunning the lion hunters as successfully as he had shunned the lions, he settled do*n to the obscurity of a

medical practice in Peebles. But in 1803 the wild called again, this time in the dulcet and portentous accents of H.M. Secretary of State for the Colonies. Mungo headed a full- blown expedition to penetrate and navigate the Niger. Forty strong, they marched inland. The seasons had been mis- calculated, and the red-coated column dwindled as it ad- vanced. Far down the Niger, far past Timbuctoo, Mungo met his death under a shower of arrows with only four com- panions. Tribesmen ambushed their canoe in the rapids.

Mr. Gibbon tells his story well. His sense of drama stiffens the narrative, his sense of irony supplies the characterization. For Mungo left almost all the characterization to his bio- graphers. Reserved, humourless, almost impregnably callous, he passed through his fantastic hazards like a man in a trance. His notes are a record of observation and nothing more— bald, accurate, dispassionate, and seldom warmed by any emotion stronger than a conventional piety or a cool dis- approbation. He stalked through the jungles, enduring incredible things in silence, keeping himself to himself. In Mr. Gibbon's pages—though one is apt to re-encounter too often a striking epithet (like " tenebrous ") which made its mark at the first meeting—it is a delight to follow him. -