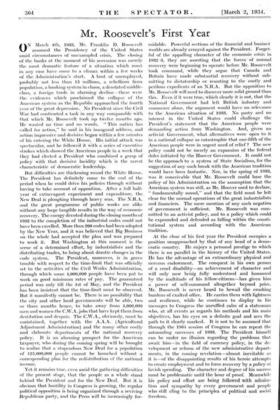 D. Roosevelt assumed the Presidency of the United States amid circumstances of unexampled crisis. The closing of the banks at the moment of his accession was merely the most dramatic feature of a situation which must in any case have come to a climax within a few weeks of the Administration's start. A host of unemployed, probably not less than 15 millions, a rebellious farm population, a banking system in chaos, a desolated middle- class, a foreign trade in alarming decline—thesc were the evidences which proclaimed the collapse of the American system as the Republic approached the fourth year of the great depression. No President since the Civil War had confronted a task in any way comparable with that which Mr. Roosevelt took up twelve months ago. He wasted no time and no words. " This nation has called for action," he said in his inaugural address, and action impressive and decisive began within a few minutes of his entering the White House. His initial attack was spectacular, and he followed it with a 'series of executive strokes which showed the American people in a week that . they had elected a President who combined a grasp of policy with that decisive lucidity which is the rarest characteristic of democratic leadership.

But difficulties are thickening round the White House. The President has definitely come to the end of the period when he could drive his policies through without having to take account of opposition. After a full half- year of extravagant experiment and expenditure, the . New Deal is ploughing through heavy seas. The N.R.A. and the great programme of public works are alike without any large tangible results in the way of economic recovery. The energy devoted during the closing months of 1933 to the completion of the industrial codes could not have been excelled. More than 200 codes had been adopted by the New Year, and it was believed that Big Business on the whole had accepted the plan and was prepared to work it. But Washington at this moment is the scene of a determined effort, by industrialists and the distributing trades, to bring about drastic changes in the code system. The President, moreover, is in grave trouble with respect. to the time-limit that was officially set to the activities of the Civil Works Administration, through which some 4,000,000 people have been put 'to work on good minimum rates of. pay. The guaranteed period was only till the 1st of May, and the President has been insistent that the time-limit must be observed. But it manifestly cannot be. There is no possibility that the city and other local governments will be able, two or three months hence, to take- away from 4,000,000 men and women the C.W.A. jobs that have kept them from destitution and despair. The C.W.A., obviously, must be maintained, together with the A.A.A. (Agricultural Adjustment Administration) and the many other costly and elaborate departments of the national recovery policy. It is an alarming prospect for the American taxpayer, who during the coming spring will be brought to realize that a stupendous New Deal for a population of 125,000,000 people cannot be launched without a corresponding plan for the redistribution of the national income.

Yet it remains true, even amid the gathering difficulties of the present stage, that the people as a whole stand behind the President and for the New Deal. But it is Obvious that hostility in Congress is growing, the regular political opposition is being organized through a reviving Republican party, and the Press will be increasingly for- midable. Powerful sections of the financial and businei worlds are already arrayed against the President. Forget ful of the appalling character of the economic crisis in 1932-3, they are asserting' that the forces of normal recovery were beginning to operate before Mi. -Roo§evelt took command, while they argue that Canada and Britain have made substantial recovery without sub- mitting to dictatorship or resorting to the costly and perilous expedients of an N.R.A. But the opposition to Mr. Roosevelt will need to discover more Solid ground than this. Even if it were true; which clearly it is riot, that the National Government had left BritiSh industry and commerce alone, the argument would have no relevance to the American situation of 1933: No party and no interest in the United States could challenge the President's statement that the American people were demanding action from Washington. And, giVen an activist Government, what alternatives were open to it in a national collapse so catastrophic that one-fifth of the American people were in urgent need of relief ? The new policy could not be merely an expansion of the federal doles initiated by the Hoover Government. It could not be the approach to a system of State Socialism; for the suggestion of any such break with the American tradition would have been fantastic. Nor, in the spring of 1933, was it conceivable that Mr. Roosevelt could base the policy of hiS Administration on the assumption that the American system was still, as Mr. Hoover used to declare, " fundamentally sound," and that the field' must be left clear for the normal operations of the great industrialists and financiers. The mere mention of any such negation of government is sufficient. Mr. Roosevelt was com- mitted to an activist policy, and to a policy which could be expounded and defended as falling within the consti- tutional system ' and according with the American tradition.

At the close of his first year the President occupies a position. unapproached by that of any head of a deno- cratic country. He enjoys a personal prestige to which there is no parallel in the history of the United States. He has the advantage of an extraordinary physical and nervous endowment. The conquest in- his own person of a cruel disability—an achievement of character and will only now being fully understood and honoured by the multitude of his fellow-citizensL-has- given him a power of Self-command altogether beyond price. Mr. Roosevelt is never heard to bewail the crushing burdens of exalted office. He carries them with lightness and resilience, while he continues to display in his messages to Congress the unruffled calm of a statesman who, at all events as' regards his methods and his main objectives, has his eyes on a definite goal and sees the path to- it clearly marked. It is not to be assumed that through the 1934 session of Congress he can repeat the astounding successes of 1933. The President himself can be under no illusion regarding the problems that await him-in the field of currency policy, in the de- velopment or reform of the new administrative depart- ments, in the- coming revelation—almost inevitable as it is—of the disappointing results of his heroic attempts to create employment and to force recovery by a policy of lavish spending. The character and degree of his success must be problematic until the hour of proof. Meanwhile his policy and effort are being followed with admira- tion and sympathy by every government and people who still cling to the principles of political and social freedom.