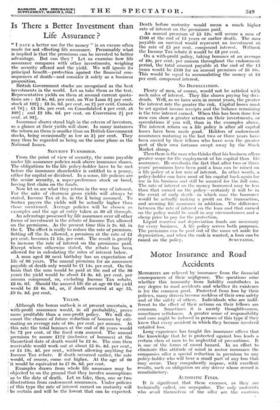 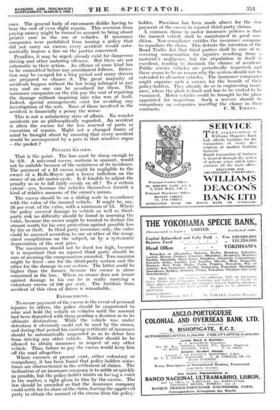 Motor Insurance and Road Accidents MOTORISTS are relieved by insurance

from the financial consequences of their negligence. The questions arise whether this immunity from liability contributes in any degree to road accidents and whether its existence is for the common good. Protehted from loss by their policies, many drivers become reckless of their own.safety and of the safety of others. Individuals who are indif- ferent to the effect of their actions on their fellows arc common. Sometimes it is merely thoughtlessneSs, sometimes selfishness. A greater sense of responsibility and care might be induced in persons of this type if they knew that every accident in which they became involved entailed loss. • : Long experience has taught fire insurance offices that the knowledge that he is protected against loss leads a certain class of man to be neglectful of precautions. It is one of the forms of moral hazard. In an effort to eliminate this attitude of mind in motor insurance the companies offer a special reduction in premium to any policy-holder who will bear a small part of any loss that may occur. -. They compulsorily impose, with excellent :results, such an obligation on any. driver whose record is unsatisfactory.

It is significant that these -excesses, as they are technically called, are unpopular. The only motorists who avail themselves of the offer are the cautious ones. The general body of ear-owners dislike having to bear the cost of even slight repairs. This aversion from paying money might be turned to account to bring about greater care in the use of vehicles. If insurance companies were prohibited from issuing a policy that did not carry an excess, every accident would auto- matically impose a fine on the parties concerned.

Penalties, it may be urged, already exist for dangerous driving and other motoring offences. But these are not automatic in their action. An offence of some kind has to be committed before any punishinent follows. Detec- tion may be escaped for a long period and many drivers are prepared to chance it. The great majority of accidents happen without the lair being infringed in.any way and no one can be penalized for them. The insurance companies on the risk pay the cost of repairing the damage without inquiring into who was at fault. Indeed, special arrangements exist for avoiding any investigation of the sort. None of those involved in the accident is financially a penny the worse.

This is not a satisfactory state of affairs. No wonder accidents are so philosophically regarded. An accident is often the excuse for the free renewal of parts or execution of repairs. Might not a changed frame of mind be brought about by ensuring that eyery accident would be accompanied by a pain in that sensitive organ —the pocket ?

That is the point. The loss must be sharp enough to be felt. A universal excess, uniform ill amount, would not be suitable because of the unfairness of its incidence. The payment of a £5 excess might be negligible to the owner of a Rolls-Royce and a heavy infliction on the owner of an old motor-cycle. Is it feasible to.adjust the penalty so as to fall fairly evenly on all ? To a certain extent—yes, because the vehicles themselves furnish a kind of relative measure of the owner's means.

The excess should be on a sliding scale in accordance with the value of the insured vehicle. - It might be, say, 20 per cent. of the value, with a minimum of £5. Where the policy covered damage to vehicle as well as third- party risk no difficulty should be found in assessing the value, because the owner might be trusted to declare the utmost worth for his own protection_against possible loss by fire or theft. In third party insurance:only, the value could be assessed according to one_ or -other of the recog- nized compilations on the subject, or by a systematic depreciation of the cost- price. -. — The maximum should not be fixed too high, because it is important that an injured -third party should be sure of securing the compensation awarded. .Two maxima might be fixed—one for the third-party section and the other for the damage to.car section. The latter could be higher than the former, because. the owner is alone concerned in the loss. Where an owner does not insure against damage to his car he is really carrying a voluntary excess of 100 per cent. The freedOiii from accident of this class of driver is remarkable,

To secure payment of the excess in the event of personal injuries to others, the police should be empowered to seize and hold the vehicle or vehicles until the amount had been deposited with them pending a decision as to its ultimate destination. While the vehicle was under detention it obviously could not be used by the owner, and during that period his existing certificate of insurance should be automatically suspended so as to debar him from driving any other vehicle. Neither should he be allowed to obtain insurance in respect of any other vehicle. Thus, failure to pay the excess would keep him off the road altogether. Where excesses at present exist,- either voluntary_ or compulsory, it has been-found that policy-holders some- times are obstructionist in the settlement of claims. The inclination of an insurance.companyis to settle as quickly as possible,,but the policy-holder insists on bang a voice in the matter, a right given to him by the excess. The law should be amended so that the insurance company could settle for its share of the claim, leaving the aggrieved party to obtain the amount of the excess from the policy- holder. Provision has been made above for the due payment of the excess in injured third-party claims. A common clause in motor insurance policies is that the insured vehicle shall be maintained in good con- dition. Non-compliance entitles the insurance company to repudiate the claim. This defeats the intention of the Road Traffic Act that third parties shall. be sure of re- covering compensation for injuries resulting from a motorist's negligence, but the stipulation in itself is excellent, tending to diminish the chance of accident. Public service vehicles are periodically inspected, and there seems to be no reason why the system should not be extended to all motor vehicles. The insurance companies might organize such a service for the benefit of their policy-holders. They alrea-dy do_ so in engineering insur- ance, where the plant is fixed and has to be visited to be examined. Motor vehicles could be brought to the place appointed for inspection. Suit a iserir ice should he compulsory on companies inserting. the clause in their