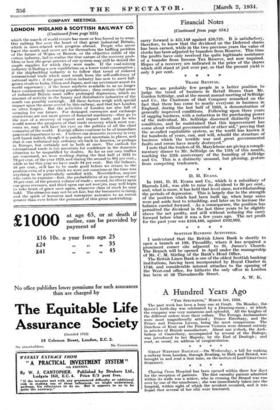 I understand that the British Linen Bank is shortly to open a branch at 198, Piccadilly, where it has acquired a prominent corner site adjacent to St. James's Church. The Branch will be opened in April under the managership of Mr. C. M. Stirling of the Bank's Head Office. The British Linen Bank is one of the oldest Scottish banking institutions, having been incorporated by Royal Charter in 1746, and considerable interest attaches to the opening of the West-end office, for hitherto the only office in London has been at 38 Threadneedle Street.