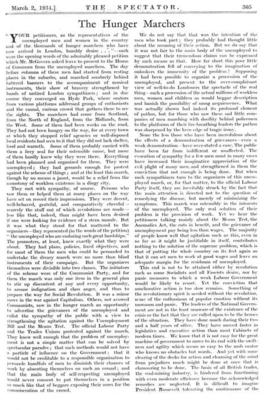 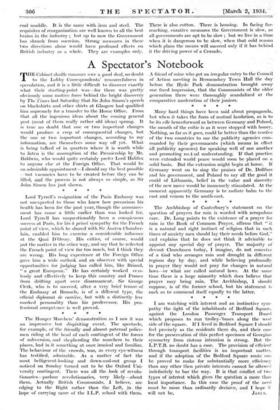 Page 5, 2 March 1934 — The Hunger Marchers 44 y OUR petitioners, as the representatives
Close

The Hunger Marchers 44 y OUR petitioners, as the representatives

of the unemployed men and women in the country and -of the thousands . of hunger marchers who have now arrived in London, humbly desire . . "—such were the opening words of the admirably phrased petition which Mr. McGovern asked leave to present to the House of Commons from the unemployed marchers. The day before columns of these men had started from resting places in the suburbs, and marched sombrely behind tattered banners to the accompaniment of musical instruments, their show of bravery strengthened by bands of untired London sympathizers ; and in due course they converged on Hyde Park, where orators from various platforms addressed groups of enthusiasts and the casual, curious crowd that gathers there to see the sights. The marchers had come from Scotland, from the North of England, from the Midlands, from the West. Some of them had been weeks on the road. They had not been hungry on the way, for at every town at which they stopped relief agencies or well-disposed local residents had seen to it that they did not lack shelter, food and warmth. Some of them probably- carried with them a fiery zeal for their ostensible cause, but more of them hardly knew why they were there. Everything had been planned and organized for them. They were unemployed; they had grounds enough . for protest against the scheme of things ; and at the least this march, though by no: means_ a jaunt, would be a relief from the monotony of workless existence in a dingy city.

They met with sympathy, of course. Persons who saw them or helped them at many places on the way have set on record their impressions. They were decent, well-behaved grateful, and comparatively cheerful— scarcely the stuff out of which revolutions are made— less like that, indeed, than might have been desired if one were looking for evidence of a stern morale. But it was what they stood for that mattered to the organizers—they represented (in the words of the petition) " the unemployed who are enduring such great hardships." The promoters, at least, knew exactly what they were about. They had plans, policies, fixed objectives, and for most of them the men who could be persuaded to undertake* the dreary march were no more than blind instruments of their . campaign. But the organizers themselves were divisible into two classes. The initiators of the scheme were of the Communist Party, and for them the march was only one item in the general plan to stir up discontent at any and every opportunity, to arouse indignation and class anger, and thus to prepare the way for Social Revolution. It was a minor move in the war against Capitalism. Others, not avowed Communists, saw in the hunger march an opportunity to advertise the grievances of the unemployed and enlist the sympathy of the public with a view to strengthening the agitation against the Unemployment Bill and the Means Test. The official Labour Party and the Trades Unions protested against the march. They knew well enough that the problem of unemploy- ment is not a simple matter that can be solved by spectacular parades ; that such methods would not have a particle of influence on the Government ; that it would not be creditable to a responsible organization to persuade 'handfuls of men to diminish their chances of work by absenting themselves on such an errand ; and that the main body of self-respecting unemployed would never consent. to put themselves in a position so much like that of beggars exposing their sores for the commiseration of the crowd. We do not say that that was the intention of the men who took part ; they probably had thought little about the meaning of their action. But we do say that -. it was not fair to the main body of the unemployed to suggest that their tremendous claims can be expressed by such means as that. How far short this poor little demonstration fell of conveying to the imagination of onlookers the immensity of the problem ! Supposing it had been possible to organize a procession of the unemployed, and present to the over-complaisant view of well-to-do Londoners the spectacle of the real thing—such a procession of the actual millions of workless men, women and children as would beggar description and banish the possibility of smug acquiescence. What was actually shown had indeed its profound element of pathoS, but for those who saw these sad little com- panies of men marching with docility behind policemen to the platforms of their fire-breathing leaders the pathos was sharpened by the keen edge of tragic irony.

None the less those who have been incredulous about the effects of a demonstration of grievances—even a weak dethonstration—have over-stated a case. The public have been far from indifferent or unaffected. The evocation of sympathy for a few men must in many cases have increased their imaginative appreciation of the evil plight of many men, and strengthened in them the conviction that not enough' is being done. But when such sympathizers turn to the organizers of this unem- ployed march, or, for that matter, to the official Labour Party itself, they are inevitably struck by the fact that the main attention is directed not to the question of remedying the disease, but 'merely of minimizing the symptoms. This march was ostensibly in the interests' of the unemployed. The only real solution of their problem is the provision of work. Yet we hear the petitioners talking mainly about the' Means Test, the Anomalies Act, the cuts in benefit, and the grievance of Unemployment pay being less than wages. The majority of people know well that agitation such as this, even in so far as it might be justifiable in itself, contributes nothing to the solution of the supreme problem, which is that of putting the whole country on its feet again so that it can set men to work at good Wages and leave an adequate margin for the residuum of unemployed.

This end is not to be attained either by revolution Such as some Socialists and all Fascists desire, nor by panic measures to which a weak Labour Government would be likely to resort. Yet the conviction that ameliorative action is too slow remains. Something of the revolutionary spirit is needed without the revolution; seine of the enthusiasm of popular emotion without its Unreason and panic. The leaders of the National Govern- ment are not in the least unaware of the existence of the crisis or the fact that they are called upon to be the heroes of the situation. They have done much during their two and a half years of office. They have moved faster in legislative and executive action than most Cabinets of Modern times. We know that it is not easy for the great 'machine of government to move to its end with the swift- ness and agility which seems so easy to the mob orator who knows no obstacles but words. And yet with sonic clearing of the decks for action and cleansing of the mind from prejudices much might be done at once that is clamouring to be done. The basis of all British trades, the coal-mining industry, is hindered from functioning with even moderate efficiency because the acknowledged remedies. are neglected. It is difficult to imagine 'President Roosevelt toleratingthe continuance of the coal muddle. It 'is the same with ,iron and steel. The requisites of reorganization are well known to all the best brains in the industry ; but up to now the Government has shrunk from coercion; Strong 'measures in these two directions alone would have profound effects on British industry as a whole. They are examples only. There is also _cotton. _There is housing. In facing far- reaching, curative measures the Government is slow, as all governments are apt to be slow ; but we live in a time when it is dangerous to be slow, when that cold reason which plans the means will succeed only if it has. behind it the driving power of a Crusade.