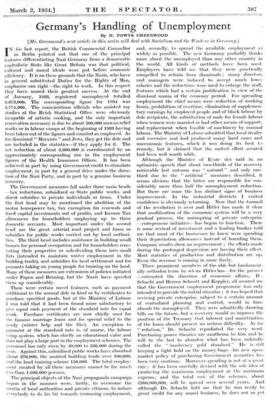 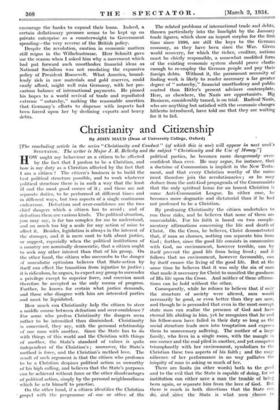 [Mr. Greenwood's next article in this series will deal with Socialism and the Work?rs in Germany.] Ihis last report, the British Cominercitil Counsellor .1 in Berlin pointed out that one of the principal features differentiating Nazi Germany from a democratic capitalistic State like 'Great Britain was that political, cultural and moral ideals were put. before economic efficiency. It is on these grounds that the Nazis, who have in general substituted Duties for the Rights of Man, emphasize one right—thuright to work. In this respect they have scored their greatest success. At the end of January, 1983, registered unemployed totalled 6,073,000. The corresponding figure for 1934 was 3,774,000. The conscientious officials who assisted my studies at the Reich Statistical Office were obviously incapable of artistic cooking, and the only important reservation necessary is due to about 200,000. men on relief works or in labour camps at the beginning of 1933 having been taken out of the figures and counted as employed. As for dismissed " Marxists ".and Jews, they get the dole and are included in the statistics—if they apply for it. The net reduction of about 2,000,000 is corroborated by an approximately corresponding rise in the employment figures of the Health Insurance Offices. It has been achieved in part by using Government credit to stimulate employment, in part by a general drive under the direc- tion of the Nazi Party, and in part by a genuine business recovery.

The Government measures fall under three main heads —tax reductions, subsidized or State public works, and direct subsidies to private individuals or firms. Under the first head may be mentioned the abolition of the motor horsepower tax, tax exemption for renewals and fixed capital investments out of profits, and Income Tax allowances for householders employing up to three domestic servants. Most important under the second head are the great arterial road project and loans or subsidies for public works carried out by local authori- ties. The third head includes assistance in building small houses for personal occupation and for householders reno- vating their properties or sub-dividing them into small flats (intended to maintain winter employment in the building trade), and subsidies for land settlement and for peasants taking on young people for training on the land. Many of these measures are extensions of policies initiated under Papen and Bruning, but the Nazis have speeded them up considerably.

There were certain novel features, such as payment additional to the normal dole in kind or by certificates to purchase specified goods, but at the Ministry of Labour I was told that it had been found more satisfactory to give equal cash payment at the standard rate for equal work. Purchase certificates are now chiefly used for the famous marriage loans and for special relief to the needy (winter help and the like). An exception to payment at the standard rate is, of course, the labour camp system, which has chiefly an educational value and does not play a large part in the employment schemes. The personnel has only risen by 50,000 to 280,000 during the year. Against this, subsidized public works have absorbed about 870,000, the assisted building trade over 100,000, and the land training scheme 150,000. The total employ- ment created. by all-these measures cannot be for much less than :1,000,000 persons.

The principal objects of the Nazi propaganda campaign begun in the summer were, firstly, to overcome the inertia of local authorities and priyate citizens, to induce everybody to do his bit towards increasing employment, and, secondly, to spread the available employment at widely as possible. The new Germany probably thinkS more about the unemployed than any other country in the world. All kinds of methods have been used. Employers have told me that they were practically compelled to refrain from dismissals ; many directors and managers were induced to accept much lower salaries and the reductions were used to enlarge the staff, features which had a certain justification in view of the dismissal mania of the economy period. For spreading employment the chief means were reduction of working hours, prohibition of overtime, elimination of supplemen- tary earnings by employed people and of black labour by dole recipients, the substitution of male for female labour when women were married or had other means of support, and replacement when feasible of machinery by manual labour. The Ministry of Labour admitted that local rivalry and excessive zeal had produced many hard cases and uneconomic features, which it was doing its best to remedy, but it claimed that the united effort secured had been well worth while.

Although the • Minister of tics said in an optimistic speech that about two-thirds of the recovery noticeable last autumn was " natural " and only one- third due to the " artificial " measures described, it seems obvious that the latter are responsible for con- siderably more than half the unemployment reduction. But there are none the less distinct signs of business improvement. In the industrial districts I visited confidence is obviously returning. Now that the turmoil of the revolution is over and Hitler has made it clear that modification of the economic system will be a very gradual process, the mainspring of private enterprise —entrepreneur initiative—has begun to function. There is some revival of investment and a leading banker told me that most of the businesses_ he knew were spending their depreciation allowances instead of hoarding them. Company results show an improvement ; the efforts made during the prolonged depression are having their effect. Most statistics of production and distribution arc up. Even the revenue is coming in more freely.

Three prominent members of the able but fundament- ally orthodox team to whom Hitler has—for the preset t —entrusted the direction of economic affairs, D:. Schacht and Herren Schmitt and Keppler, all assured me that the Government employment programme was only intended to provide the initial. stimulus ; it was hoped that reviving private enterprise, subject to a certain amount of centralized planning and control, would in time absorb the unemployed. They were admittedly drawing bills on the future, but a recovery would so improve the -position of the Treasury that interest and amortization of the loans should present no serious difficulty. As for " reflation," Dr. Schacht repudiated the very word. Purchasing power theories are anathema to him and he will be the last to abandon what has been unkindly called the " insolvency gold standard." He is still keeping a tight hold on the money-bags—his new open- market policy of purchasing Government securities has been very cautious. Moreover spending is not at a great rate ; it has been carefully devised with the sole idea of producing the maximum employment at the minimum expense, and the total cost of the schemes, about £200,000,000, will be spread over several years. And although Dr. Schacht told me that he was ready to gitnt''eredit for any sound business, he does not as yet encourage the 'banks to expand their loans. Indeed, a certain deflationary pressure seems to be kept up on private enterprise as a counterweight to Government spending—the very reverse of the British policy.

Despite the revolution, caution in economic matters still reigns in the Wilhelmstrasse. Herr Schmitt gave me the reason when I asked him why a movement which had put forward such unorthodox financial ideas as National Socialism was not emulating the expansive policy of President Roosevelt. What America, bound- lessly rich in raw materials and gold reserves, could easily afford, might well ruin Germany, with her pre- carious balance of international payments. He pinned his hopes to a world revival of trade and repudiated extreme " autarchy," making the reasonable assertion that Germany's efforts to dispense with imports had been forced upon her by declining exports and heavy debts. The related problems of international trade and debts, thrown particularly into the limelight by the January trade figures, which show an import surplus for the first time since 1930, are still the keys to the German economy, as they have been since the War. Given world recovery, for which the richer, creditor, nations must be chiefly responsible, a somewhat modified form of the existing economic system should prove elastic enough to re-employ the German people and pay their foreign debts. Without it, the paramount necessity of finding work is likely to render necessary a far greater degree of " autarchy," financial unorthodoxy and public control than Hitler's present advisers contemplate. Here, as elsewhere, the Nazis are opportunists. Big Business, considerably tamed, is on trial. Radical Nazis, who are anything but satisfied with the economic changes hitherto introduced, have told me that they are waiting for it to fail.