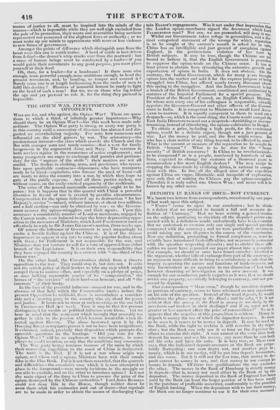 THE OPIUM WAR, ITS SUPPORTERS AND OPPONENTS.

Wino arc fin., and who against, the Opium War ? These are ques- tions to which a third, of infinitely greater importance—Why should there be an Opium War ?—has this week been made sub- ordinate. The Opium War party is strong, as every war party is in this country until a succession of disasters has alarmed and dis- gusted an overwhelming majority. For note how numerous and influential are the chief gainers by war. The aristocracy—the predominant interest—the class which crowds the Church and the Bar with younger sons and needy cousins—find a vent for family hangers-on in the augmented Army and Navy. The veterans in both services rejoice in the recurrence of active employment ; and many youngsters are eager to exchange dull parades and garrison- duty for the " rapture of the strife ": their motives are not all sordid. The dealers in clothing, arms, and provisions, who specu- late upon profitable contracts—shipowners, who have transports ready to be hired—capitalists, who foresee the need of loans—all are ready to drive the country into a war, by which they hope to gain at the public expense. And all these parties reckon, not without cause, on the easily-excited pugnacity of the multitude.

The voice of the general mercantile community ought to be for peace : but it happens that in this quarrel with China a powerful diversion in thvour of war is created by peculiar circumstances. Compensation for the opium delivered up to destruction " for her Majesty's service "—valued, without interest, at about two millions and a half sterling—can only be obtained by war : so the Govern- ment assures the opium-smugglers and their agents. Upon this assurance a considerable number of London merchants, engaged in the Canton trade, were induced to sign the letter deprecating oppo- sition to the measures of Ministers, which Lord PALMERSTON used so effectively in reply to Sir JAMES GRAHAM'S motion, three weeks ago.

Of course the influence of Government is used unsparingly to excite a hostile feeling against the Chinese. It is of the utmost importance to appear at any rate to carry the popular feeling along with them ; for Parliament is not responsible for the war, and Ministers dare not venture to call for a vote of approval from either branch of the Legislature. It is on their own responsibility that they have engaged the country in a contest with " one-third of the human race."

On the other hand, the Conservatives shrink from a sincere opposition to time war. They could stop it, but dare not. It suits not the selfish policy of their leaders to take any step which might compel them to assume office, and especially on a pledge of peace, at once balking mercantile avarice of' its " compensation," the heroes of " the sen ices " of their hard-won honours, and all " the interests" of their booty.

In the face of the powerful influence, arrayed for war, and in the absence of that help which the Conservative tactics induce the present. Opposition to withhold, there is nevertheless a consider- able and a growing party in the country who cry aloud for peace and justice. It boots not to sneer at such meetings as the one held in Freemasons Hall list week. True it may be that few persons distinguished tom wealth or political influence were there. Yet we bear in mire! that the senthnent which brought that assembly to- gether is akin to the passion 'Mitch became irresistible when di- rected against Slavery. The abuse bestowed upon it by the Downing Street newspapers proves it not to have been insignificant. It exhibited indeed, precisely that disposition which prompts dis- agreeable questions on the hustings. " Did you vote for the

Opium Wes " will be as unpleasant an interrogatory, in sonic places we could mention, ELS any that the candidate may encounter. The War party betray soreness because of the name by which their marauding expedition to the coast of China is designated.

The truth is the libel. It' it is not a war whose origin was opium, ani whose end is opium, Ministers have writ their annals false in the Blue Book. For is it not there recorded, that the quarrels

and difficulties—time cumulative case which it is now attempted to

place in the ibreground—were merely incidents in the struggle on one side to exclude, and on the other to introduce opium ? Is it not the main object of the foray to China to procure the price of the

opium destroyed by the Chinese authorities ? .VOI'd JOHN RUSSELL could not deny this in the House, though neither durst he

tain ELLIOT'S engagements. Was it not under that impresisidiona tdb

the i e London m m

opiu-merchants signed the document which Lord PALMERSTON read ? Not one, we are persuaded, will deny it wits Whilst our Government takes refuge in generalities, a tinct categorical statement of the wrongs for which reparation is to be sought at the cannon's mouth is asked for in vain China has an intelligible and just ground of complaint agains; England, in the pertinacious violation of her laws by British subjects. It may be true, thoue the Chinese are 1101 bound to believe it, that the English Government is powerless to suppress the opium-trade on the Chinese coast. It has at least power to abstain from stimulating the extensive growth and exportation of opium in India. It does not abstain. On the contrary, the Indian Government, which for many years brought opium into the market and sold it for the express purpose of being smuggled into China, has offered nearly twenty thousand chests this spring to the smugglers. And the Indian Government is but a branch of the British Government, constituted and authorized by statutes of the Imperial Parliament for a special purpose. The President of the Board of Control, an English Cabinet Minister for whose acts every one of his colleagues is responsible, virtually appoints the Governor-General and other officers of the Govern. ment in India. It is competent to Ministers to recall Lord Aucx- LAND to-morrow. It is equally competent to them to send out a despatch—or, which is the same thing, the Courts would compel the East India Directors to send out a despatch—forbidding or discoun- tenancing, instead of' stimulating, the opium-cultivation in Bengal. To obtain a price, including a high profit, for the condemned opium, would be a definite object, though not a just ground, of war. Let the money be paid, and the fleet might return. But who has a clear notion of aoy thing beyond, to be effected by arms? What is the amount or measure of the reparation to be sought for British " honour" ? What is to be done for the " future security" of British commerce ? Is China to be revolutionized—. to be conquered? or is a people, numbered by hundreds of mil- lions, expected to change the customs of a thousand years to accommodate a few score English dealers ? The new recipe for stopping the slave-trade by civilizing Africa, is rational in comps. rison with this. In fine, all the alleged aims of the expedition against China are vague, illimitable, and incapable of explanation, save only that of making the Chinese pay the opium-smugglers. Therefore it is truly called THE Opium WAR,; and never will it be known by any other name.