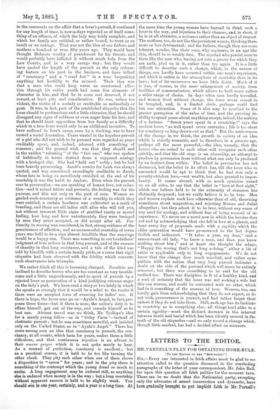 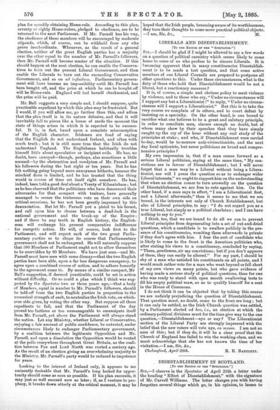 ITo THE EDITOR OF THE "SPECTATOR."' SIR,—Every one interested in Irish affairs must be glad to see attention called to the question discussed in the concluding paragraphs of the letter of your correspondent, Mr. John Ball, for upon this question all Irish politics for the moment turn. There can be no doubt that the Nationalist party, excepting only the advocates of armed insurrection and dynamite, have been gradually brought to put implicit faith in Mr. Parnell's

plan for speedily obtaining Home-rule. According to this plan, seventy or eighty Home-rulers, pledged to obedience, are to be returned to the next Parliament. If Mr. Parnell has his way, the obedience of these members will be encouraged by moderate stipends, which, of course, can be withheld from any who prove insubordinate. Whenever, as the result of a general election, neither of the great English parties has a majority over the other equal to the number of Mr. Parnell's followers, then Mr. Parnell will become master of the situation. If this should happen at the next election, he can enable the Conservatives to turn out the present Liberal Government, and then enable the Liberals to turn out the succeeding Conservative Government, and so on ad infinitum. Parliamentary government will have become an impossibility until Mr. Parnell has been bought off, and the price at which he can be bought off will be Home-rule. England will feel herself checkmated, and the price will be paid.

Mr. Ball suggests a very simple and, I should suppose, quite practicable expedient by which this plan may be frustrated. But I would, if you will allow me, go further than this, and affirm that the plan itself is in its nature delusive, and that it will inevitably fall to pieces like a house of cards the moment the state of things arises in which it is expected to be successful. It is, in fact, based upon a complete misconception of the English character. Irishmen are fond of saying that the English do not understand Ireland, and often with much truth ; but it is still more true that the Irish do not understand England. The Englishman habitually troubles himself little about speculative or incipient evils. He has, no doubt, been annoyed—though, perhaps, also sometimes a little amused—by the obstruction and rowdyism of Mr. Parnell and his followers during the last eight or ten years. But he has felt nothing going beyond mere annoyance hitherto, because the mischief done is limited, and he has trusted that the thing would in course of time set itself right somehow. He has, indeed, been told a good deal about a Treaty of Kilmainham ; but as he has observed that the politicians who have denounced their adversaries for that compact with traitors, have generally managed to secure the traitorous vote on their own side on critical occasions, he has not been greatly impressed by this denunciation. But let Mr. Parnell put a pistol to his breast, and call upon him to choose between a dead-lock in the national government and the break-up of the Empire ; and if there be any truth in English history, the Englishman will exchange his present comparative indifference for energetic action. He will, of course, look first to the Parliament, and will expect each of the two great Parliamentary parties so to shape its course that Parliamentary government shall not be endangered. He will naturally suppose that 590 Members of Parliament ought not to allow themselves to be overridden by 80 Members. We have just seen—and Mr. Parnell must have seen with some dismay—that the two English parties have been able, upon a far less dangerous emergency, to agree upon a combined course of action, and to adhere honestly to the agreement come to. By means of a similar compact, Mr Ball's suggestion, if deemed practicable, could be set in action without difficulty. Or so could a plan which I think was suggested by the Spectator two or three years ago,—that a body of Members, equal in number to Mr. Parnell's followers, should be told-off from the twn English parties in proportion to the numerical strength of each, to neutralise the Irish vote, on whichever side given, by voting the other way. But suppose all these expedients to fail, and that the Parliament of the day proved too factions or too unmanageable to emancipate itself from Mr. Parnell, yet above the Parliament will always stand the nation. Let any Ministry, whether Liberal or Conservative, enjoying a fair amount of public confidence, be outvoted, under circumstances likely to endanger Parliamentary government, by a coalition between the legitimate Opposition and Mr. Parnell, and upon a dissolution the Opposition would be routed at the polls everywhere throughout Great Britain, as the coalition between Fox and Lord North was routed a century ago. As the result of an election giving an overwhelming majority to the Ministry, Mr. Parnell's party would be reduced to impotence for years.

Looking to the interest of Ireland only, it appears to me eminently desirable that Mr. Parnell's long looked for opportunity should come as soon as possible. If his plan succeeds, it may just as well succeed now as later ; if, as I venture to prophesy, it breaks down utterly at the critical moment, it may be hoped that the Irish people, becoming aware of its worthlessness, lay turn their thoughts to some more practical political objects.