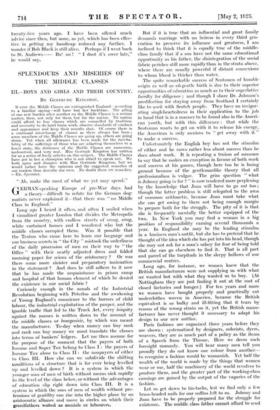 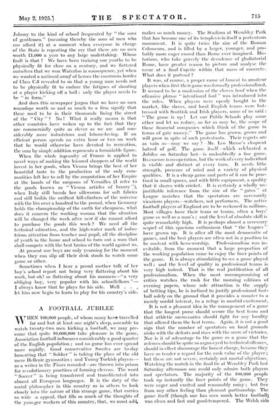 SPLENDOURS AN D MISERIES OF THE MIDDLE CLASSES

If over the Middle Classes are extinguished England—according to a familiar saying—will have lost her backbone. The piling of one new burden after another on the Middle Classes is a serious matter, then, not only for them but for the nation. No nation could afford to lose classes which are compelled by tradition and necessity to do hard brain work, observe standards of conduct and appearance and keep their mouths shut.. Of course there is a continual interchange of classes as there always has been ; some members of the Middle Classes are going up, others are going down. Yet when all allowance has been made for the inevita- bility of the sufferings of thoso who are adapting themselves to a lower state, the distresses of the Middle Classes are numerous, undeserved, and very real. Miss Gertrude Kingston has written for us a series of lively articles on this subject. The Middle Classes have got in her a champion who is not afraid to speak out. We both agree and disagree with Miss Gertrude Kingston, but we would rather have the opinions and the suggested remedies of our readers than describe our own. No doubt there are remedies. —ED. Spectator.

" Ah, make the most of what we yet may spend." GERMAN-speaking Europe of pre-War days had a theory—difficult to refute for the German dog- matists never explained it—that there was " no Middle Class in England."

Long ago I heard it often, and often I smiled when I visualized greater London that divides the Metropolis from the country, with endless streets of smug, snug, white curtained houses and I wondered who but the middle classes occupied them. Was it possible that the Teuton who came here to learn our language and our business secrets in " the City " mistook the orderliness of the daily procession of men on their way to " the Office " with their neatly adjusted dress and folded morning paper for scions of the aristocracy ? Or was there some more sinister and preparatory insinuation in the statement ? And does he still adhere to it now that he has made the acquaintance in prison camp and hospital of that human element of which he denied the existence in our social fabric ?

Curiously enough in the annals of the Industrial Revolution beginning with Peterloo and the awakening of Young England's conscience to the horrors of child labour, the industrial exploitation of the pauper, and the ignoble traffic that led to the Truck Act, every iniquity against the masses is written down to the account of the middle classes or bourgeoisie, by which was meant the manufacturer. To-day when money can buy rank and rank can buy money we must translate the classes into terms of bankers' ledgers. Let me then assume for the purpose of the moment that the payers of both Income and Super Tax belong to Class I : the payers of Income Tax alone to Class II : the nonpayers of either to Class III. How else can we subdivide the shifting conditions of a structure that is for ever being levelled up and levelled down ? It is a system in which the younger sons of men of birth without means sink rapidly to the level of the class below, or without the advantages of education slip right down into Class III. It is a system in which the sons of men of wealth without pre- tensions of gentility can rise into the higher plane by an aristocratic alliance and move in circles on which their grandfathers waited_ as menials or labourers. But if it is true that an influential and great family demands marriage with an heiress in every third gen- eration to preserve its influence and greatness, I ant inclined to think that it is equally true of the middle- class family that if a son have not the same educational opportunity as his father, the disintegration of the social fabric perishes still more rapidly than in the strata above, where there are usually powerful if distant connexions to whom blood is thicker than water.

The quite remarkable success of Scotsmen of humble • origin as well as of•gentle birth is due to their superior opportunities of education as much as to their superlative faculty for diligence ; and though I share Dr. Johnson's predilection for staying away from Scotland I certainly like to work with Scotch people. They have an invigor- ating singleheartedness in their application to the job in hand that is in a manner to be found also in the Ameri- can youth, but with this difference : that while the Scotsman wants to get on with it to release his energy, the American is only anxious to " get away with it to make a success.

Unfortunately the English boy has not the stimulus of either and he cares rather less about success than he does about work. It is repeating a truism ad nauseant to say that he makes an exception in favour of both work and success at his games, though here too he is losing ground because of the gentlemanlike theory that all professionalism is vulgar. The grim question " what is Johnny going in for " is now rendered more perplexing by the knowledge that Joan will have to go out too ; though the latter problem is still relegated to the area of common arithmetic, because Joan must take what she can get owing to there not being enough margin to prepare both for the struggle. The pity of it is that she is frequently mentally the better equipped of the two. In New York you may find a woman in a big position of responsibility earning several thousands a year. In England she may be the leading stimulus in a business man's outfit, but she has to pretend that he thought of the idea which she has put into his head, though she may not ask for a man's salary for fear of being told that she can go elsewhere to find it. That is all part and parcel of the turpitude in the sleepy hollows of our commercial centres.

Long ago, for instance, we women knew that the British manufacturers were not supplying us with what we wanted but with what they wanted us to buy. (At Nottingham they are just finding it out at the cost of closed factories and hunger.) For ten years and more we women have bought properly and practically cut underclothes woven in America, because the British equivalent is so bulky and ill-fitting that it tears by reason of the wrong strain on it, yet the British manu- facturer has never thought it necessary to adapt his design to our new outline.

Paris fashions are organized three years before they are shown : systematized by designers, colorists, dyers, weavers, they are as much part of a policy as the items of a Speech from the Throne. Here we deem such foresight unmanly. You will hear many men tell you proudly they do not know one colour from another— to recognize a fashion would be womanish. Yet half the wealth of the world is made by the things that women wear or use, half the machinery of the world revolves to produce them, and the greater part of the working-class earnings are gained by the output of the vagaries of the fashion.

Let us get down to tin-tacks, lest we find only a few brass-headed nails for our coffins left to us. Johnny and Joan have to be properly prepared for the struggle for existence. The middle class father cannot afford to send Johnny to the kind of school frequented by " the sons of gentlemen " (meaning thereby the sons of men who can afford it) at a moment when everyone in charge of the State is repeating the cry that there are no men worth £1,000 a year to any large undertaking. Whose fault is that ? We have been training our youths to be physically fit for close on a century, and we flattered ourselves that we won Waterloo in consequence, yet when we wanted a national armg of heroes the enormous hordes of Class C.3 revealed to us that a young man needs not to be physically fit to endure the fatigues of shouting at a player kicking off a ball : only the player needs to be " in form."

And does this newspaper jargon that we have no men nowadays worth so and so much to a firm signify that these used to be in their thousands lining the street of the " City " ? No ! What it really means is that other countries have woken up to the fact that they are commercially quite as clever as we are and con- siderably more industrious and labour-loving. If an efficient person spends an extra hour or two on work that he would otherwise have devoted to recreation, the sum by simple addition represents a formidable figure.

When the whole ingenuity of France is applied to novel ways of making the leisured shoppers of the world invest in her goods, when Vienna brings the best of her beautiful taste to the production of the only com- modities left her to sell by the amputation of her Empire at the hands of the surgeons of Versailles (I refer to the goods known as " Vienna articles of luxury "), when Italy still breeds her silkworms for soft fabrics and still builds the swiftest hill-climbers of the universe with the lira over a hundred to the pound, when Germany holds the championship of the earth for cheapness, what does it concern the working woman that the situation will be changed the week after next if she cannot afford to purchase the goods this week ? We need all the technical education, and the high-water mark of indus- triousattention from teacher and pupil, all the discipline of youth in the home and school to turn out a man that shall compete with the best brains of the world against us.

At present our boys are only yearning for the moment when they can slip off their desk stools to watch some game or other.

Sometimes when I hear a proud mother talk of her boy's school report not being very flattering about his work, but oh! so flattering about his manners—" a very obliging boy, very popular with his schoolfellows "- I always know that he plays for his side. Well . . let him now begin to learn to play for his country's side.