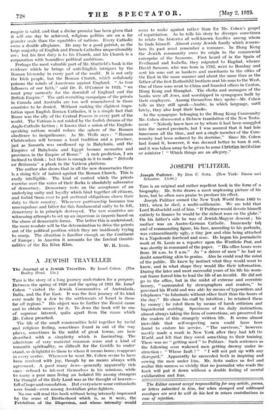 Joseph Pulitzer. By Don C. Seitz. (New York: Simon and Schuster. t5.00.) Tars is an original and rather repellent book in the form of a biography. Mr. Seitz draws a most unpleasing picture of his hero, but he often uses praise to produce his effect.

Joseph Pulitzer owned the New York World from 1883 to 1911, when he died, a multi-millionaire. We are told that Lord Rothschild said of him. "If Pulitzer would devote himself entirely to finance he would be the richest man on the globe." On his father's side he was of Jewish-Magyar descent ; his mother was an Austro-German Catholic. Immensely tall and of commanding figure, his face, according to his portraits, was extraordinarily ugly, a tiny jaw and chin being attached to a Napoleonic forehead and nose. He began his journalistic work at St. Louis as a reporter upon the Westliche Post, and was shortly in command of the paper. " His office hours were from 10 a.m. to 2 a.m." As " a driver of men " he had no doubt something akin to genius. Also he could read the mind of the public. He knew by instinct what they would want to know, and in what shape they would like their information. During the later and most successful years of his life his worn- out frame forced him to lead the life of an invalid. He did not go to the office, but in the midst of extreme and eccentric luxury, " surrounded by stenographers and readers," he governed his World and was able by means of typewriters and telephones "to fulminate without other limit than the hours of the day." He chose his staff by intuition ; lie retained them by money ; he ruled them by means of harsh criticism and inquisitorial scolding. Specimens of his daily instructions almost always taking the form of corrections, are preserved for the readers of this strangely written life. It seems almost incredible that self-respecting men could have been found to endure his service. " The survivors," however: mostly made a mark in New York after they had left the World, and felt that they owed something to their training. There was no " getting used " to Pulitzer. Such sentences as the following soon wakened men getting drowsy under in- struction : " Whose fault ? " " I will not put up with any disregard." Apparently he succeeded both in inspiring and cowing the men under him. Mr. Seitz makes us feel and realize this success so vividly that no journalist who reads the book will put it down without a double feeling of mental exhilaration and fear.