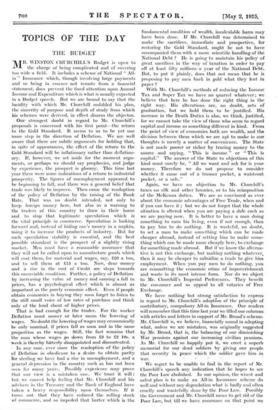 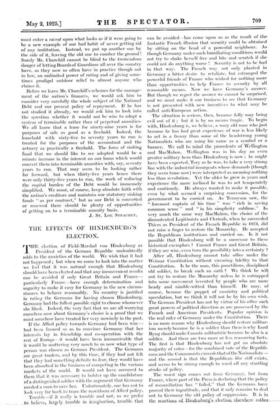 MR. WINSTON CHURCHILL'S Budget is open to the charge of being complicated and of covering too wide a field. It includes a scheme of National " All- in " Insurance which, though involving large payments and so being in essence not remote from a financial statement, does prevent the fixed attention upon Annual Income and Expenditure which is what is usually expected in a Budget speech. But we arc bound to say that the lucidity with which Mr. Churchill unfolded his plan, the sincerity of purpose and depth of study from which his schemes were derived, in effect disarm the objector.

Our strongest doubt in regard to Mr. Churchill's proposals is concerned with his first point—the return to the Gold Standard. It seems to us to be yet one more step in the direction of Deflation. We are well aware that there are subtle arguments for holding that, in spite of appearances, the effect of the return to the Gold Standard will be inflationary rather than deflation- ary. If, however, we set aside for the moment argu- ments, or perhaps we should say prophecies, and judge by experience, the prospect is gloomy. This time last year there were some indications of a return to industrial prosperity. The figures of unemployment appeared to be beginning to fall, and there was a general belief that trade was likely to improve. Then came the readoption of the policy of Deflation by the raising of the Bank Rate. That was no doubt intended, not only to keep foreign money here, but also as a warning to the traders of this country to draw in their horns and to stop that legitimate speculation which is the vital principle in commerce. Speculation is looking forward and, instead of hiding one's money in a napkin, using it to increase the products of industry. But for such speculation stability is essential, and the best possible stimulant is the prospect of a slightly rising market. Men must have a reasonable assurance that they will not be called upon to manufacture goods which will cost them, for material and wages, say, £20 a ton, and to sell them at £15 a ton. Now, dear money and a rise in the cost of Credit are steps towards this unenviable condition. Further, a policy of Deflation by increasing the value of money and causing a fall in prices, has a psychological effect which is almost as important as the purely economic effect. Even if people obtain economies in buying they soon forget to listen to the still small voice of low rates of purchase and think only of the loud shout of higher prices.

That is bad enough for the trader. For the worker Deflation must sooner or later mean the lowering of wages. No doubt the lowering of wages may economically be only nominal, if prices fall as soon and in the same proportion as the wages. Still, the fact remains that the man whose wages go down from £8 to £2 10s. a.

week is thereby bitterly disappointed and discontented. z- In any ease, ever since the readoption . of the policy Of Deflation in obedience to a desire • to obtain parity for sterling we have had a rise in unemployment, and a general depression in the country such as has not been seen for many years. PosSibly experience may prove that our view is a mistaken one. We trust it will ; but we cannot help feeling that Mr. Churchill and his advisers in the Treasury and the Bank of England have taken a heavy responsibility upon themselves. If it turns out that they have reduced the rolling stock of commerce, and so impeded that barter which is the fundamental condition of wealth, incalculable harm may have been done. If Mr. Churchill was determined to make the sacrifices, immediate and prospective, for restoring the Gold Standard, ought he not to have accompanied them with a more scientific handling of the National Debt ? He is going to maintain his policy of great sacrifices in the way of taxation in order to pay off at least fifty millions- a year of the National Debt.

But, to put it plainly, does that not mean that he is proposing to pay men back in gold what they lent in paper ?

With Mr. Churchill's methods of reducing the Income Tax and Super Tax we have no quarrel whatever ; we believe that here he has done the right thing in the right way. His alterations are, no doubt, acts of graduation, but we hold them to be justified. His increase in the Death Duties is also, we think, justified, for we cannot take the view of those who seem to regard capital and income as something different in kind. From the point of view of economics both are wealth, and the division between them which we are apt to make in our thoughts is merely a matter of convenience. The State is not made poorer or richer by tracing money to the source and saying, " This is income " or " This is capital." The answer of the State to objections of this kind must surely be, " All we want and ask for is your money. Therefore we do not propose to consider whether it came out of a trouser pocket, a waistcoat pocket, or a safe."

Again, we have no objection to Mr. Churchill's taxes on silk and other luxuries, or to his reimposition of the McKenna duties. We are as convinced as ever about the economic advantages of Free Trade, when and if you can have it ; but we do not forget that the whole situation is altered when you are paying a dole such as we are paying now. It is better to have a man doing something to earn his living, even if not enough, than to pay him to do nothing. It is wasteful, no doubt, to set a man to make something which can be made cheaper abroad, instead of setting him to make some- thing which can be made more cheaply here, to exchange for something made abroad. But if we know the alterna- tive is not this exchange, but making nothing whatever, then it may be cheaper to subsidize a trade to give him employment. When you pay men to do nothing, you are committing the economic crime of impoverishment and waste in its most intense form. Nor do we object to Mr. Churchill's Imperial Preferences. They benefit the consumer and so appeal to all votaries of Free Exchange.

We have nothing but strong satisfaction to express in regard to Mr. Churchill's adoption of the principle of contributory, compulsory All-in Insurance. Our readers will remember that this time last year we filled our columns with articles and letters in support of Mr. Broad's scheme.

Mr. Churchill is, we believe, financially sound in adopting what, unless we are mistaken, was originally suggested by Mr. Broad, that is, the balancing of our diminishing War pensions against our increasing civilian pensions. As Mr. Churchill so happily put it, we erect a superb. memorial for our dead soldiers by giving our people that security in peace- which the soldier gave him in war. r.

- We regret to be unable to find in the report of Mr. Churchill's speech any indication that he hopes to see the Poor Law abolished. In our opinion, the wisest and safest plan is to make an All-in Insurance scheme do well and without any degradation what is badly and often cruelly and wastefully done by the Poor Law. Possibly the Government and Mr. Churchill mean to get rid of the Poor Law, but till we have assurance on that point we must enter a caveat upon what looks as if it were going to be a new example of our bad habit of never getting rid of any institution. Instead, we put up another one by the side of it, leaving the old one to cumber the ground ! Surely Mr. Churchill cannot be blind to the tremendous danger of letting Boards of Guardians all over the country have, as they now so often have in practice though not in law, an unlimited power of rating and of giving some- times prodigal outdoor relief to almost anyone who claims it.

Before we leave Mr. Churchill's schemes for the manage- ment of the nation's finances, we would ask him to consider very carefully the whole subject of the National Debt and our present policy of repayment. If he has not studied it already, we would ask him to look into the question whether it would not be wise to adopt a system of terminable rather than of perpetual annuities. We all know that a lease for ninety-nine years is for purposes of sale as good as a freehold. Indeed, the leasehold with sixty-five to seventy years to run is treated for the purposes of the accountant and the actuary as practically a freehold. The form of sinking fund that we should like to see adopted would be a minute increase in the interest on our loans which would convert them into terminable annuities with, say, seventy years to run. That may seem to be looking rather far forward, but when thirty-five years hence there were only thirty-five years to run, the work of reducing the capital burden of the Debt would be immensely simplified. We must, of course, keep absolute faith with the nation's creditors and maintain our statutory sinking funds " as per contract," but as our Debt is converted or renewed there should be plenty of opportunities of getting on to a terminable annuity basis.