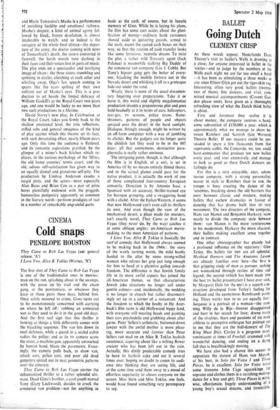 They Came to Rob Las Vegas (ABC general release, 'A') I Love You, Alice B. Toklas (Warner, 'X') The first shot of They Came to Rob Las Vegas is one of the traditionalist ones in movies: man on the run, splashing about in the swamps, with the posse on his trail and the chain gang, or the penitentiary, or whatever they keep in those pArts these days, behind him. Once safely restored to crime, Gino turns out to be monotonously concerned with carrying on where he left off: robbing an armoured van as they used to do it in the good old days. And the first real sign that this thriller is looking at things a little differently comes with the hijacking sequence. The van lets down its steel defences, while a guard in a seated cabin radios the police; and as its TV camera scans the street, a machine-gun, apparently untouched by human hand, blasts the pavements. Freez- ingly, the camera pulls back, to show van, attack cars, police cars, and poor old dead gangsters spread out in neat geometric patterns over the concrete.

They Came to Rob Las Vegas carries the dehumanised thriller to a rather splendid ulti- mate. Dead Gino's brother, a cool youth named Tony (Gary Lockwood), decides to crack the armoured van problem—not for anything as

basic as the cash, of course, but in lunatic memory of Gino. While he is laying his plans, the film has some curt asides about the glori- fication of money—ordinary bank customers shoved aside as quivering guards, armed to the teeth, escort the sacred cash boxes on their way, so that the routine of cash transfer looks like some ferocious, neurotic dream. To twist the plot, a rather wild Treasury agent (Jack Palance) is meanwhile stalking Big Daddy of the armoured van company (Lee J. Cobb). But Tony's hipster gang gets the better of every- one, hijacking the mobile fortress out in the Nevada desert and whisking it off to a grotesque hide-out under the sand.

Wisely, there is none of the usual documen- tary lingering over preparations. Take it err leave it, this weird and slightly megalomaniac production invents a preposterous plot and goes bald-headedly at it in terms of cars, helicopters, tear-gas, Tv screens, police sirens, flame- throwers, patterns of people and objects sprayed over the desert in the hard sunlight. Dialogue, fittingly enough, might be written by an off-form computer with a way of jumbling its clichés. But the gadgets are no longer quite the childish fun they used to be in the 007 days: all that anonymous, destructive para- phernalia is really rather ominous.

The intriguing point, though, is that although the film is in English, of a sort, is set in America (if by no means entirely filmed there), and to the casual glance could pass for the native product, it is actually the work of one of those complicated four-country European consortia. Direction is by Antonio Isasi, a Spaniard with an accurate, thriller-trained eye for baroque grouping, and a swaggering hand with a cliché. After the Italian Western, it seems that now Hollywood can't even call its thrillers its own. And even though the view of the mechanised desert, a place made for murders, isn't exactly novel, They Came to Rob Las Vegas (they never do, by the way) catches it at some oblique angles: un-American movie- making, to the most American of patterns.

I Love You, Alice B. Toklas is basically the sort' of comedy that Hollywood always seemed to be making back in the 1940s: the story of the wanly turning worm, the mild booby hauled to the altar by some strong-willed woman who relaxes her grip just long enough for him to head at a plaintive gallop towards freedom. The difference is that Jewish family life in its more awful aspects has joined the all-American themes, so that characteristic Jewish joke. situations no longer sail under gentile colours—and, incidentally, the wedding is no longer in church but rather disconcert- ingly set up in a corner of a restaurant. And the freedom to which the booby in Hy Aver- back's film turns is old Hollywood hippy land, with everyone still wearing beads and painting their cars psychedelic and grubbing about after gurus. Peter Sellers's asthmatic, buttoned-down lawyer with the awful mother is more pleas- ing, more accurate and funnier than Peter Sellers run mad on an Alice B. Toklas hashish sweetmeat, capering about like a wilting flower ancient who has been left out in the rain. Actually, this dimly predictable comedy tries to have its hashish cake and eat it several times over, hoping no doubt to cozen its audi- ence into thinking they are seeing life, and at the same time send them away in a mood of effortless superiority to almost everyone on the screen. Miss Stein and Miss Toklas, one feels, would have found something very peremptory to say.