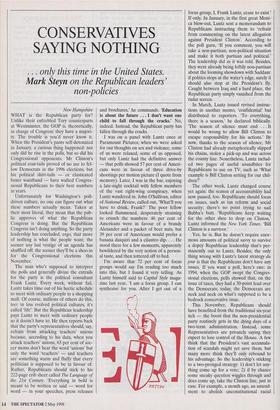 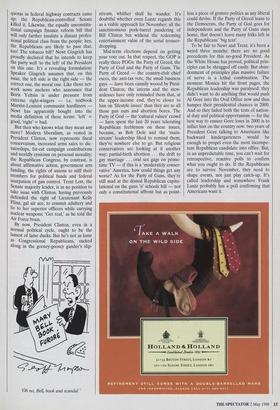 . only this time in the United States.

Mark Steyn on the Republican leaders'

New Hampshire WHAT is the Republican party for? Unlike their enfeebled Tory counterparts at Westminster, the GOP is, theoretically, in charge of Congress: they have a majori- ty. The trouble is you'd never know it. When the President's pants self-detonated in January, a curious thing happened: not only did he rise in the polls, but so did his Congressional opponents. Mr Clinton's political coat-tails proved of no use to fel- low Democrats in the 1996 elections, but his political shirt-tails — or elasticated boxer waistband — have wafted Congres- sional Republicans to their best numbers in years.

Unfortunately for Washington's poll- driven culture, no one can figure out what these numbers actually mean. Taken at their most literal, they mean that the pub- lic approves of what the Republican Congress is doing. But the Republican Congress isn't doing anything. So the party leadership has concluded, ergo, that more of nothing is what the people want; the sooner any last vestige of an agenda has shuffled off, the sooner they'll be a shoo-in for the Congressional elections this November, The man who's supposed to interpret the polls and generally divine the entrails for the party is the political consultant Frank Luntz. Every week, without fail, Luntz takes time out of his hectic schedule to meet with ordinary people in a shopping mall. Of course, millions of others do this, too: in less evolved political cultures, it's called 'life'. But the Republican leadership pays Luntz to meet with ordinary people so it doesn't have to. He then reports back that the party's representatives should, say, refrain from attacking teachers' unions because, according to his data, when you attack teachers' unions, 63 per cent of soc- cer moms don't hear the word 'unions' but only the word 'teachers' — and teachers are something warm and fluffy that every politician is supposed to be in favour of. Rather, Republicans should stick to his 222-page crib sheet called The Language of the 21st Century. 'Everything in bold is meant to be written or said — word for word — in your speeches, press releases and brochures,' he commands. 'Education is about the future . . . I don't want one child to fall through the cracks.' No, indeed. Instead, the Republican party has fallen through the cracks.

I was on a panel with Luntz once at Paramount Pictures; when we were asked for our thoughts on sex and violence, some of us were relaxed, some of us opposed, but only Luntz had the definitive answer — that polls showed 57 per cent of Ameri- cans were in favour of three drive-by shootings per motion picture (I quote from memory). Later, I was in the bar, enjoying a late-night cocktail with fellow members of the vast right-wing conspiracy, when Luntz wandered in. John O'Sullivan, editor of National Review, called out, 'What'll you have to drink, Frank?' The poor fellow looked flummoxed, desperately straining to crunch the numbers: 46 per cent of Americans were in favour of a brandy Alexander and a packet of beer nuts, but 39 per cent of Americans would prefer a banana daiquiri and a cilantro dip. . . . He stood there for a few moments, apparently bewildered by the very notion of a person- al taste, and then tottered off to bed.

I'm aware that 72 per cent of focus groups would say I'm reading too much into this, but I found it very telling. As Luntz himself said to Capital Style maga- zine last year, 'I am a focus group. I can synthesise for you. After I get out of a focus group, 1, Frank Luntz, cease to exist.' If only. In January, in the first great Moni- ca blow-out, Luntz sent a memorandum to Republicans instructing them to 'refrain from commenting on the latest allegation against President Clinton'. According to the poll guru, 'If you comment, you will take a non-partisan, non-political situation and make it both partisan and political.' The leadership did as it was told. Besides, they were already being loftily non-partisan about the looming showdown with Saddam: if politics stops at the water's edge, surely it should also stop at the President's fly. Caught between Iraq and a hard place, the Republican party simply vanished from the radar screen.

In March, Luntz issued revised instruc- tions in another memo, 'confidential' but distributed to reporters. `To everything, there is a season,' he declared biblically. 'The season of silence must end . . . It would be wrong to allow Bill Clinton to escape responsibility for his actions.' By now, thanks to the season of silence, Mr Clinton had already metaphorically slipped his chains, stolen a pick-up and was across the county line. Nonetheless, Luntz includ- ed two pages of useful soundbites for Republicans to use on TV, such as 'What example is Bill Clinton setting for our chil- dren?'

The other week, Luntz changed course yet again: the season of accountability had now passed, too. Republicans should focus on issues, such as tax reform and social security; there's no point trying to nail Bubba's butt. 'Republicans keep waiting for the other shoe to drop on Clinton,' Luntz informed the New York Times. 'Bill Clinton is a survivor.'

Yes, he is. But he doesn't require enor- mous amounts of political savvy to survive a dopey Republican leadership that's per- manently out to Luntz. Besides, the only thing wrong with Luntz's latest strategy du jour is that the Republicans don't have any issues. If you want a poll, here's one: in 1994, when the GOP swept the Congres- sional elections, polls showed that, on the issue of taxes, they had a 30-point lead over the Democrats; today, the Democrats are neck and neck on what's supposed to be a bedrock conservative issue.

This November, Republicans should have benefited from the traditional six-year itch — the boost that the non-presidential party routinely gets in the dying days of a two-term administration. Instead, some Representatives are privately saying they expect to lose control of the House. A few think that the President's vast accumula- tion of scandals might yet save them, but many more think they'll only rebound to his advantage. So the leadership's sticking to a two-pronged strategy: 1) don't let any- thing come up for a vote; 2) if by chance some sneaky question wiggles through and does come up, take the Clinton line, just in case. For example, a month ago, an amend- ment to abolish unconstitutional racial quotas in federal highway contracts came up; the Republican-controlled Senate killed it. Likewise, the equally unconstitu- tional campaign finance reform bill that will only further insulate a distant profes- sional political class from the people; hey, the Republicans are likely to pass that, too! The tobacco bill? Newt Gingrich has proudly declared that he intends to keep the party well 'to the left' of the President on this one. It's a revealing formulation: Speaker Gingrich assumes that, on this issue, the left side is the right side — the correct one, the moral one. Like those net- work news anchors who announce that Boris Yeltsin is under pressure from extreme right-wingers — i.e. textbook Marxist-Leninist communist hardliners Newt has apparently bought into the media definition of these terms: 'left' = good, 'right' = bad.

But then who knows what they mean any more? Modern liberalism, as vested in President Clinton, now represents fiscal conservatism, increased arms sales to dic- tatorships, fat-cat campaign contributions and worldly cynicism on personal morality; the Republican Congress, by contrast, is about affirmative action, government arts funding, the rights of unions to stiff their members for political funds and federal usurpation of gun control. Trent Lott, the Senate majority leader, is in no position to take issue with Clinton, having previously defended the right of Lieutenant Kelly Flinn, gal air ace, to commit adultery and lie to her superior officers while carrying nuclear weapons: 'Get real,' as he told the Air Force brass.

By now, President Clinton, even in a normal political cycle, ought to be the lamest of lame ducks. But he's not as lame as Congressional Republicans, sucked along in the goosey-goosey gander's slip- `Oh no, Bell, book and scandal.' stream, whither shall he wander. It's • doubtful whether even Luntz regards this as a viable approach for November; all the sanctimonious pork-barrel pandering of Bill Clinton but without the redeeming entertainment value of the serial trouser- dropping.

Mid-term elections depend on getting your vote out. In that respect, the GOP is really three POGs: the Party of Greed, the Party of God and the Party of Guns. The Party of Greed — the country-club chief execs, the anti-tax vote, the small business guys — have been cannily wooed by Presi- dent Clinton; the interns and the stew- ardesses have only reminded them that, at the upper-income end, they're closer to him on 'lifestyle issues' than they are to all those gun nuts and abortion bores. The Party of God — the 'cultural values' crowd — have spent the last 20 years tolerating Republican feebleness on these issues, because, as Bob Dole and the 'main- stream' leadership liked to remind them, they've nowhere else to go. But religious conservatives are looking at it another way; partial-birth abortion . . . the drift to gay marriage . . . oral sex gags on prime- time TV — if this is a 'moderately conser- vative' America, how could things get any worse? As for the Party of Guns, they're still mad at the dismal Republican capitu- lational on the guns 'n' schools bill — not only a constitutional affront but as point- less a piece of gesture politics as any liberal could devise. If the Party of Greed leans to the Democrats, the Party of God goes for independents and the Party of Guns stays home, that doesn't leave many folks left in the Republicans' big tent'.

To be fair to Newt and Trent, it's been a weird three- months: there are no good precedents for this no-good President. As the White House has proved, political prin- ciples can be shrugged off easily. But aban- donment of principles plus massive failure of nerve is a lethal combination. The moment Monica hit the front pages, the Republican leadership was paralysed: they didn't want to do anything that would push Al Gore into the Oval Office now and thus hamper their presidential chances in 2000. And so they failed both the tests of nation- al duty and political opportunism — for the best way to ensure Gore loses in 2000 is to inflict him on the country now: two years of President Gore talking to Americans like backward kindergarteners would be enough to propel even the most incompe- tent Republican candidate into office. But, in an unpredictable time, you can't wait for retrospective, reactive polls to confirm what you ought to do. If the Republicans are to survive November, they need to shape events, not just play catch-up. It's called leadership and somewhere Frank Luntz probably has a poll confirming that Americans want it.