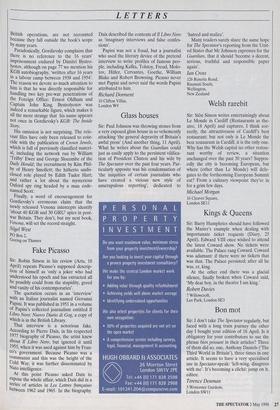 Sir: Robin Simon in his review (Arts, 18 April) repeats Picasso's supposed descrip- tion of himself as 'only a joker who had understood his epoch and has extracted all he possibly could from the stupidity, greed and vanity of his contemporaries'. The quotation occurs in an 'interview' with an Italian journalist named Giovanni Papini. It was published in 1951 in a volume of Papini's collected journalism entitled Il Libro Nero: Nuovo Diario di Gog, a copy of which is in the British Library. That interview is a notorious fake. According to Pierre Daix, in his respected 1977 biography of Picasso, the artist knew about II Libro Nero, but ignored it until 1955, when it was used against him by Fran- co's government. Because Picasso was a communist and this was the height of the Cold War, it was further disseminated by Nato intelligence. At this point Picasso asked Daix to expose the whole affair, which Daix did in a series of articles in Les Lettres frangaises between 1962 and 1965. In the biography, Daix described the contents of II Libro Nero as 'imaginary interviews and false confes- sions'.

Papini was not a fraud, but a journalist who used the literary device of the pretend interview to write profiles of famous peo- ple, including Kafka, Tolstoy, Freud, Molo- tov, Hitler, Cervantes, Goethe, William Blake and Robert Browning. Picasso never met Papini and never said the words Papini attributed to him.