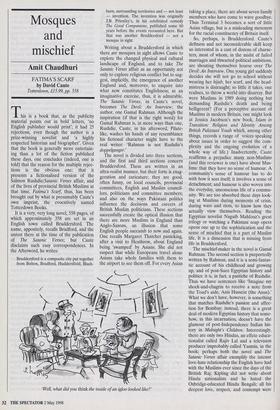 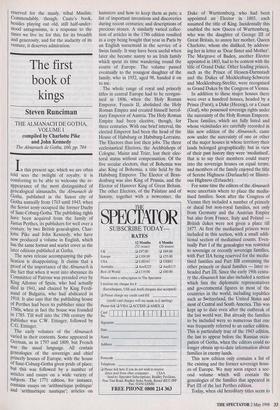 FATIMA'S SCARF by David Caute Totterdown, £15.99, pp. 558 This is a book that, as the publicity material points out in bold letters, 'no English publisher would print'; it had 25 rejections, even though the author is a prize-winning novelist and 'a highly respected historian and biographer'. Given that the book is generally more entertain- ing than a lot of the fiction published these days, one concludes (indeed, one is told) that the reason for the multiple rejec- tions is the obvious one: that it presents a fictionalised version of the Salmon Rushdie/Satanic Verses affair, and of the lives of provincial British Muslims at that time. Fatima's Scarf, thus, has been brought out by what is presumably Caute's own imprint, the evocatively named Totterdown Books.

It is a very, very long novel, 558 pages, of which approximately 358 are set in an English town called Bruddersford. The name, appositely, recalls Bradford, and the unrest there at the time of the publication of The Satanic Verses; but Caute disclaims such easy correspondences. In the Afterword, he writes:

Bruddersford is a composite city put together from Bolton, Bradford, Huddersfield, Black-

burn, surrounding territories and — not least — invention. The invention was originally J.B. Priestley's, in his celebrated comedy The Good Companions, published some 60 years before the events recounted here. But that was another Bruddersford — not a mosque in sight.

Writing about a Bruddersford in which there are mosques in sight allows Caute to explore the changed physical and cultural landscape of England, and to take The Satanic Verses affair as an opportunity not only to explore religious conflict but to sug- gest, implicitly, the emergence of another England and, moreover, to enquire into what now constitutes Englishness; as an imaginative exercise, thus, it is admirable. The Satanic Verses, in Caute's novel, becomes The Devil: An Interview; the author, one Gamal Rahman. Although the inspiration (if that is the right word) for Gamal Rahman is, in more ways than one, Rushdie, Caute, in his afterword, Pilate- like, washes his hands of any resemblance his fictional character might have to the real writer: 'Rahman is not Rushdie's doppelganger.'

The novel is divided into three sections, and the first and third sections concern Bruddersford. These are written in an ultra-realist manner, but their forte is exag- geration and caricature; they are good, often funny, on local councils, provincial committees, English and Muslim council- lors, politicians and committee members; and also on the ways Pakistani politics influence the decisions and careers of British Muslim politicians. These sections successfully create the optical illusion that there are more Muslims in England than Anglo-Saxons, an illusion that some English people succumb to now and again. One recalls Margaret Thatcher panicking, after a visit to Heathrow, about England being 'swamped' by Asians. She did not suspect that while Europeans travel alone Asians take whole families with them to the airport to see them off. For every Asian `Well, what did you think the inside of an igloo looked like?' taking a place, there are about seven family members who have come to wave goodbye. Thus Terminal 3 becomes a sort of little Asian village, but is a misleading metonym for the racial constituency of Britain itself.

So, perhaps, is Bruddersford. Caute's deftness and not inconsiderable skill keep us interested in a cast of dozens of charac- ters, most of whom, in the midst of failed marriages and thwarted political ambitions, are shouting themselves hoarse over The Devil: An Interview. One young girl suddenly decides she will not go to school without wearing her hijab, her scarf, and the head- mistress is distraught; so little it takes, one realises, to throw a world into disarray. But were Muslims in 1989 doing nothing but demanding Rushdie's death and being belligerent? (For a perceptive account of Muslims in modern Britain, one might look at Jessica Jacobson's new book, Islam in Transition: Religion and Identity Among British Pakistani Youth which, among other things, records a range of voices speaking about issues in order to suggest the com- plexity and the ongoing evolution of a whole way of life.) Inadvertently, Caute reaffirms a prejudice many non-Muslims (and this reviewer is one) have about Mus- lims: that they have no sense of humour. A community's sense of humour has to do with how it sees itself; it involves a sense of detachment; and humour is also woven into the everyday, unconscious life of a commu- nity. We are too absorbed these days look- ing at Muslims during moments of crisis, during wars and riots, to know how they actually view themselves. Reading the Egyptian novelist Naguib Mahfouz's great trilogy or watching a Pakistani soap opera opens one up to the sophistication and the sense of mischief that is a part of Muslim life. It is a dimension that is missing from life in Bruddersford.

The mischief-maker in the novel is Gamal Rahman. The second section is purportedly written by Rahman, and it is a semi-fantas- tic account of his childhood and growing up, and of post-Suez Egyptian history and politics: it is, in fact, a pastiche of Rushdie. Thus we have sentences like 'Imagine my shock-and-chagrin to receive a note from the Toad's aide, Anis Hussein (the Anus).' What we don't have, however, is something that matches Rushdie's passion and affec- tion for Bombay; instead, there is a great deal of modern Egyptian history that some- how, in this incarnation, doesn't have the glamour of post-Independence Indian his- tory in Midnight's Children. Interestingly, there are only two Hindus, an effete educa- tionalist called Rajiv Lai and a television producer improbably called Yasmin, in the book; perhaps both the novel and The Satanic Verses affair exemplify the intense love-hate relationship the English have had with the Muslims ever since the days of the British Raj; Kipling did not write about Hindu nationalists and he hated the Oxbridge-educated Hindu Bengali; all his deepest love, respect, and contempt were reserved for the manly, tribal Muslim. Commendably, though, Caute's book, besides playing out old, still half-under- stood antagonisms, is a response to the times we live in; for this, for its breadth and generosity, and for the audacity of its venture, it deserves admiration.