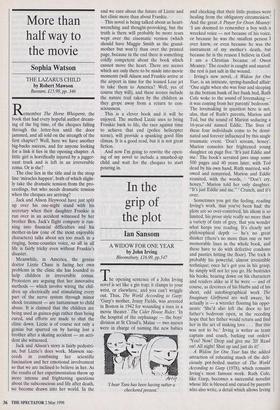 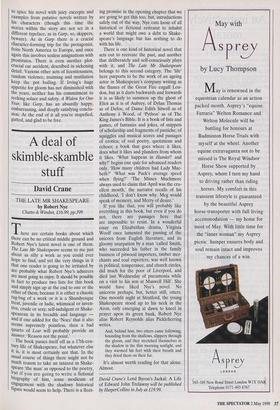 In the grip of the plot

A WIDOW FOR ONE YEAR by John Irving Bloomsbury, £16.99, pp.547 The opening sentence of a John Irving novel is set like a gin trap; it clamps to your wrist, or elsewhere, and you can't wriggle out. Thus, The World According to Garp: `Garp's mother, Jenny Fields, was arrested in Boston in 1942 for wounding a man in a movie theater.' The Cider House Rules: 'In the hospital of the orphanage — the boys' division at St Cloud's, Maine — two nurses were in charge of naming the new babies

`I hear Tara has been having rather a checkered present.'

and checking that their little penises were healing from the obligatory circumcision.' And the great A Prayer for Owen Meaney: `I am doomed to remember a boy with a wrecked voice — not because of his voice, or because he was the smallest person I ever knew, or even because he was the instrument of my mother's death, but because he is the reason I believe in God; I am a Christian because of Owen Meaney.' The reader is caught and snared: the rest is just salt in the wound.

Irving's new novel, A Widow for One Year, is an intricate, spring-handled affair: `One night when she was four and sleeping in the bottom bunk of her bunk bed, Ruth Cole woke to the sound of lovemaking it was coming from her parents' bedroom.' The lovemaking in question here is not, alas, that of Ruth's parents, Marion and Ted, but the sound of Marion seducing a 16-year-old named Eddie. The lives of these four individuals come to be domi- nated and forever influenced by this single traumatic event. 'Don't scream, honey', Marion consoles her frightened young daughter on page five. 'It's just Eddie and me.' The book's serrated jaws snap some 500 pages and 40 years later, with Ted dead by his own hand, Ruth married, wid- owed and remarried, Marion and Eddie reunited, with the words, "Don't cry, honey," Marion told her only daughter. "It's just Eddie and me." ' Crunch, and it's over.

Sometimes you get the feeling, reading Irving's work, that you've been had: the plots are so over-contrived, his idiom is so limited, his prose style really no more than a variety of tints of grey, that you wonder what keeps you reading. It's clearly not philosophical depth — he's no great thinker (there's no more than one or two memorable lines in the whole book, and these have to do with defective condoms and panties hitting the floor). The trick is probably his powerful, almost irresistible technique; once he's got you in his grasp, he simply will not let you go. He bestrides his books, bearing down on his characters and readers alike as if he were — and of course, as devotees of his blurbs and of his short, odd autobiographical work The Imaginary Girlfriend are well aware, he actually is — a wrestler flooring his oppo- nents: 'She'd also left the door to her father's bedroom open, in the receding hope that her father would return and find her in the act of making love . . . But this was not to be.' Irving is writer as team captain and coach, barking out orders: `You! Now! Drop and give me 20! Read on! All night! Shut up and just do it!'

A Widow for One Year has the added attraction of reheating much of the deli- ciously pot-boiled matter of The World According to Garp (1978), which remains Irving's most famous work. Ruth Cole, like Garp, becomes a successful novelist whose life is blessed and cursed by parents who also write, a detail which allows Irving to spice his novel with juicy excerpts and examples from putative novels written by his characters (though this time the stories within the story are not set in a different typeface, as in Garp, so, skippers, beware). As in Gaup there is a crucial character-forming trip for the protagonist, from North America to Europe, and once again this involves sexless assignations with prostitutes. There is even another plot- crucial car accident, described in sickening detail. Various other acts of licentiousness, random violence, maiming and mutilation keep the pot boiling. If Irving's huge appetite for gloom has not diminished with the years, neither has his commitment to seeking solace and safety. A Widow for One Year, like Garp, has an absurdly happy, embarrassing, and deeply satisfying conclu- sion. At the end of it all you're stupefied, gutted, and glad to be free.