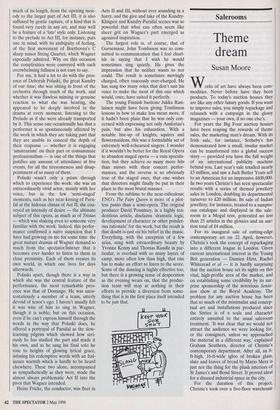 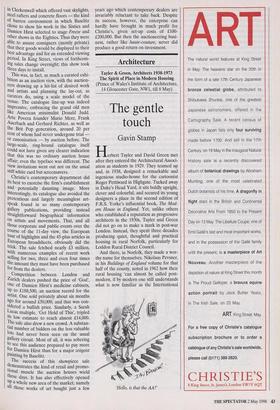 orks of art have always been com- modities. Never before have they been products. To today's auction houses they are like any other luxury goods. If you want to improve sales, you simply repackage and relaunch with a campaign in the glossy magazines — your own, if no one else's.

For years the Big Four auction houses have been reaping the rewards of theme sales, the marketing man's dream. With its Irish sale, for instance, Sotheby's has demonstrated how a small, insular market can be transformed into a global success story — provided you have the full weight of an international publicity machine behind you. Last year's sale totalled nearly £5 million, and saw a Jack Butler Yeats sell to an American for an impressive £600,000. In two years Christie's has seen spectacular results with a series of themed jewellery sales in London, doubling its departmental turnover to £20 million. Its sale of Indian jewellery, for instance, treated to a sumptu- ous catalogue and displayed in the sale- room in a Mogul tent, generated no less than 25 articles in the glossies and an auc- tion total of £4 million.

For its inaugural sale of cutting-edge contemporary art on 22 April, however, Christie's took the concept of repackaging into a different league in London. Given current international interest in the Young Brit generation — Damien Hirst, Rachel Whiteread et al — it is hardly surprising that the auction house set its sights on this vital, high-profile area of the market, and on establishing some credibility by its sur- prise sponsorship of the notorious Sensa- tion show at the Royal Academy. The problem for any auction house has been that so much of the minimalist and concep- tual art and installations produced since the Sixties is of a scale and character entirely unsuited to the usual saleroom treatment. 'It was clear that we would not attract the audience we were looking for, or the consigners, unless we approached the material in a different way,' explained Graham Southern, director of Christie's contemporary department. After all, an 8- ft-high, 16-ft-wide igloo of broken glass, slate and loaves of bread by Mario Merz is just not the thing for the plush interiors of St James's and Bond Street. It proved ideal for a disused industrial space in the city.

For the duration of this project, Christie's took over a five-floor warehouse in Clerkenwell which offered vast skylights, steel rafters and concrete floors — the kind of barren environment in which Baselitz chose to show his work in the Sixties and Damien Hirst selected to stage Freeze and other shows in the Eighties. Thus they were able to assure consigners (mostly private) that their goods would be displayed to their best advantage and for an extended viewing period. In King Street, views of forthcom- ing sales change overnight; this show took three days to install.

This was, in fact, as much a curated exhi- bition as an auction view, with the auction- eers drawing up a hit-list of desired work and artists and planning the lay-out, as curators do, using a scale model of the venue. The catalogue line-up was indeed impressive, embracing the grand old men like American minimalist Donald Judd. Arte Povera founder Mario Merz, Frank Auerbach and Gerhard Richter, as well as the Brit Pop generation, around 20 per cent of whom had never undergone trial or canonisation — by auction before. The large-scale, ring-hound catalogue itself could not have given any clearer indication that this was no ordinary auction house affair; even the typeface was different. The view invitations went out not on the usual stiff white card but screensavers.

Christie's contemporary department did its best to exorcise the firm's establishment and potentially daunting image. More interestingly, its catalogue also avoided the pretentious and largely meaningless art- speak found in so many contemporary gallery publications, providing instead straightforward biographical information on artists and movements. That, and all those corporate and public events over the course of the 11-day view, the European tour of highlights and the 45-plus articles in European broadsheets, obviously did the trick. The sale fetched nearly £3 million, With numerous examples of recent work selling for two, three and even four times the amount they must have been purchased for from the dealers.

Competition between London and Zurich dealers pushed the price of 'God', one of Damien Hirst's medicine cabinets, up to £188,500, an auction record for the artist. One sold privately about six months ago for around £50,000, and that was con- sidered a bullish price. Similarly, a Sarah Lucas multiple, 'Get Hold of This', tripled its low estimate to reach almost £14,000. The sale also drew a new crowd. A substan- tial number of bidders on the less valuable lots had never been seen on the usual gallery circuit. Most of all, it was sobering to see this audience prepared to pay more for Damien Hirst than for a major zeitgeist painting by Baselitz. The success of this showpiece sale demonstrates the kind of retail and promo- tional muscle the auction houses wield these days. It has also effectively opened up a whole new area of the market, namely all those works of art bought just a few years ago which contemporary dealers are invariably reluctant to take back. Despite its success, however, the enterprise can hardly have brought in much profit for Christie's, given set-up costs of £100- £200,000. But then the auctioneering busi- ness, rather like haute-couture, never did produce a good return on investment.