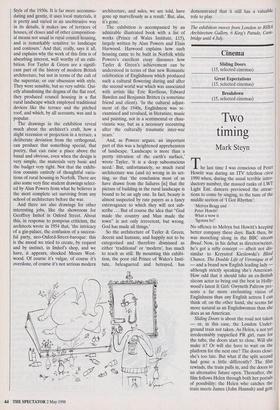 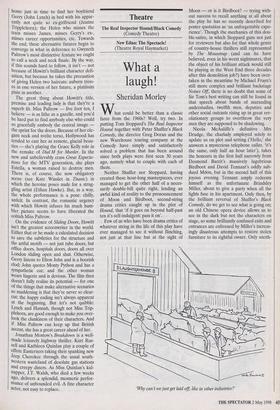 The last time I was conscious of Peter Howitt was during an ITV telethon circa 1990 when, during the usual terrible intro- ductory number, the massed ranks of LWT Light Ent. dancers previewed the attrac- tions to come by singing, to the tune of the middle section of 'I Got Rhythm':

No offence to Melvyn but Howitt's keeping better company these days. Back then, he was mooching along in the BBC sitcom Bread. Now, in his debut as director/writer, he's got a nifty concept — albeit not dis- similar to Krzysztof Kieslowski's Blind Chance, The Double Life of Veronique et al — and a brand new English leading lady although strictly speaking she's American. How odd that it should take an ex-British sitcom actor to bring out the best in Holly- wood's latest It Girl: Gwyneth Paltrow pre- sents a far more enchanting vision of Englishness than any English actress I can think of; on the other hand, she seems far more natural as an Englishwoman than she does as an American.

Sliding Doors is about the road not taken — or, in this case, the London Under- ground train not taken. As Helen, a not yet irredeemably yuppiefied PR girl, runs for the tube, the doors start to close. Will she make it? Or will she have to wait on the platform for the next one? The doors close: she's too late. But what if the split second had gone a little differently? The film rewinds, the train pulls in, and the doors to an alternative future open. Thereafter, the film follows Helen through both her portals of possibility: the Helen who catches the train meets James (John Hannah) and gets home just in time to find her boyfriend Gerry (John. Lynch) in bed with his appar- ently not quite so ex-girlfriend (Jeanne Tripplehorn); the Helen who misses the train misses James, misses Gerry's ex-, misses career opportunities, etc. Towards the end, these alternative futures begin to converge in what in deference to Gwyneth Paltrow's most distinctive feature we ought to call a neck and neck finale. By the way, if this sounds hard to follow, it isn't — not because of Howitt's brilliant character defi- nition, but because he takes the precaution of giving Helen two haircuts: auburn tress- es in one version of her future, a platinum pixie in another.

The great thing about Howitt's title, premise and leading lady is that they're a superb fit. Miss Paltrow — five foot ten, I believe — is as lithe as a gazelle, and you'd be hard put to find anybody else who could so gracefully embody the central image the sprint for the doors. Because of her ele- gant neck and svelte torso, Hollywood has tended to cast her as remote, glacial beau- ties — she's playing the Grace Kelly role in the remake of Dial M for Murder. In the new and unbelievably crass Great Expecta- tions for the MTV generation, she plays Estella, a woman raised to destroy men. There is, of course, the now obligatory scene (see Kate Winslet in Titanic) in which the heroine poses nude for a strug- gling artist (Ethan Hawke). But, in a way, the whole performance is a pose: chilly, unfelt. In contrast, the romantic urgency with which Howitt infuses his much hum- bler picture seems to have liberated the coltish Miss Paltrow.

On the evidence of Sliding Doors, Howitt isn't the greatest screenwriter in the world. Either that or he made a calculated decision to save the subtleties for the structure and the artful motifs — not just tube doors, but office doors, hospitals doors, doors all over London sliding open and shut. Otherwise, Gerry listens to Elton John and is a boorish clod; John quotes Monty Python and has a sympathetic ear; and the other woman wears lingerie and is devious. The film then doesn't fully realise its potential — for one of the things that make alternative scenarios so maddening is that they're never so clear- cut: the happy ending isn't always apparent at the beginning. But let's not quibble: Lynch and Hannah, though not Miss Trip- plehorn, are good enough to make you over- look the clunkiness of their characters. And If Miss Paltrow can keep up that British accent, she has a great career ahead of her.