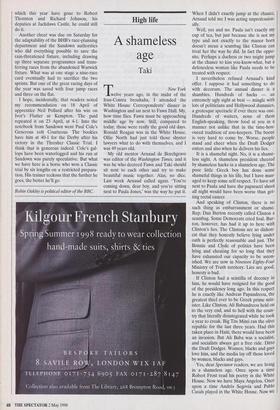 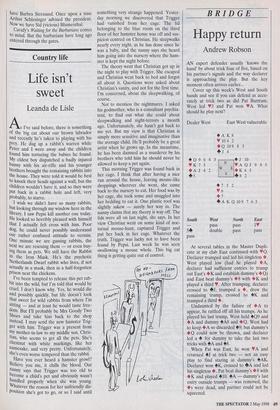 New York welve years ago, in the midst of the Iran-Contra brouhaha, I attended the White House Correspondents' dinner in Washington and sat next to Fawn Hall My, how time flies. Fawn must be approaching middle age by now. Still, compared to today, those were really the good old days. Ronald Reagan was in the White House, 011ie North had just told those shyster lawyers what to do with themselves, and I was 49 years old.

My old mentor Arnaud de Borchgrave was editor of the Washington Times, and it was he who decreed Fawn and Taki should sit next to each other and try to make beautiful music together. Alas, no dice. Last week Arnaud called again. 'You're coming down, dear boy, and you're sitting next to Paula Jones,' was the way he put it. When I didn't exactly jump at the chance, Arnaud told me I was acting unprofession- ally.

Well, yes and no. Paula isn't exactly my cup of tea, but just because she is not my type and not exactly to the manor born doesn't mean a scumbag like Clinton can treat her the way he did, In fact the oppo- site. Perhaps a duchess or two might jump at the chance to kiss you-know-what, but a defenceless woman like Paula needs to be treated with respect.

I nevertheless refused Arnaud's kind offer. I suppose it had something to do with decorum. The annual dinner is a shambles. Hundreds of hacks — an extremely ugly sight at best — mingle with lots of politicians and Hollywood dummies, a grotesque spectacle if ever there was one. Hundreds of waiters, none of them English-speaking, throw food at you in a manner not unlike that in the time-hon- oured tradition of zoo-keepers. The booze is very hard to come by. Worse, people stand and cheer when the Draft Dodger enters and also when he delivers his lies. .

It is a shameful sight. No, it is a shame- less sight. A shameless president cheered by shameless hacks in a shameless age. The poor little Greek boy has done some shameful things in his life, but I have man- aged to keep some self-respect. To have sat next to Paula and have the paparazzi shoot all night would have been worse than get- ting rectal cancer.

And speaking of Clinton, there is no such thing as embarrassment or shame. Rep. Dan Burton recently called Clinton a scumbag. Some Democrats cried foul. Bur- ton, however, has had it up to here with Clinton's lies. The Clintons are so dishon- est that they honestly believe lying under oath is perfectly reasonable and just. The Bonnie and Clyde of politics have been lying and cheating for so long that they have exhausted our capacity to be aston- ished. We are now in Nineteen Eighty-Four Ministry of Truth territory. Lies are good, honesty is bad.

If Clinton had a scintilla of decency in him, he would have resigned for the good of the presidency long ago. In this respect he is exactly like Andreas Papandreou, the greatest thief ever to be Greek prime min- ister. Like Clinton, Ali Babandreou held on to the very end, and to hell with the coun- try that literally disintegrated while he took a year to croak. Big Tits Mimi ran the olive republic for the last three years. Had this taken place in Haiti, there would have been an invasion. But Ali Baba was a socialist, and socialists always get a free ride. Ditto the Draft Dodger. Women, blacks and gays love him, and the media lay off those loved by women, blacks and gays.