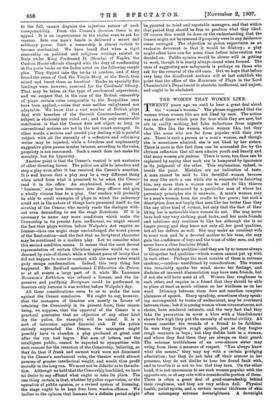 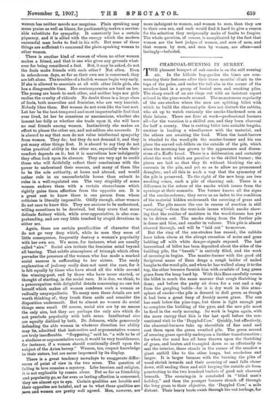 TWENTY years ago we used to hear a great deal about the "woman's woman." The phrase suggested that the women whom women like are not liked by men. The notion

was one of those which pass for true while they are new, but are in reality nothing but false deductions from cognate facts. Men like the women whom women like, but they also like some who are far from popular with their own sex. There is such a person as a man's woman, and though she is sometimes admired, she is not liked by her sisters. There is more in this fact than can be accounted for by the obvious reflection that all men admire youth and beauty and that many women are jealous. There is more, too, than can be explained by saying that each sex is hampered by ignorance in its judgment of the other. This explanation, indeed, is beside the point. Mistakes are no indication of taste. A man cannot be said to like deceitful women because he may like such a one while she is successful in deceiving him, any more than a woman can be said to like thieves because she is attracted by a particular man of whose lax pecuniary principles she is unaware. A man's woman may be a man's woman from her cradle to her grave; but such a description does not imply that men like her better than they like any other kind of woman, but only that the fact of their liking her is noticeable since women do not. She may never have had any very striking good looks, and her male friends and relations may continue to like her although she is no longer young, and they know not only all her good qualities, but all her defects as well. She may make an excellent wife to some man and be a devoted mother to his sons, she may gain the confidence of boys and the trust of older men, and yet never have a close feminine friend.

There are certain qualities—and they are by no means always or altogether bad qualities—which women cannot put up with in each other. Perhaps the most notable of these is extreme candour,—candour unsoftened by consideration. The woman who invariably speaks her mind, shows her feelings, and disdains all innocent dissimulation may have men friends, but if not she will have none at all. Women fear roughness in each other, and require in a friend that they should be able to place at least as much reliance on her kindness as on her word. Intimacy between them does not sanction complete plainness of speech. Sharp speaking, sometimes sharp speak- ing accompanied by terms of endearment, may be overheard between them ; but it is among women whom circumstances, not choice, have rendered intimate, and the very fact that they take the precaution to cover a blow with a blandishment shows how high they put the necessity of mutual civility. All women consider the wounds of a friend to be faithless. In men they forgive rough speech, just as they forgive rough manners in boys ; but they dislike both in a woman, and where they find them they are always on their guard. The extreme truthfulness of an over-sincere sister may wring from them a measure of respect. "You always know what she means," they may say with a certain grudging admiration ; but they do not take off their armour in her presence, they do not dislike to hear her found fault with, and in trouble it is not to her that they turn. On the other hand, it is not uncommon to see such women popular with the opposite sex, or at any rate with a considerable portion of them. There is often a great deal of good-comradeship behind their roughness, and they are very seldom dull. Physical health, jovial spirits, and a certain mental thickness of skin often accompany extreme downrightness. A downright

woman has neither moods nor megrims. Plain speaking may mean praise as well as blame, for partisanship makes a service- able substitute for sympathy. It constantly has a certain piquancy, and it is allied with the energy which the modern successful man looks to find in his wife. But none of these things are sufficient to commend the plain-speaking woman to other women.

There is another kind of woman of whom no other woman makes a friend, and that is one who gives any grounds what- ever for being considered a fool. But, it may be asked, do not the fools make friends with each other F Not often. Even in schoolroom days, so far as their own sex is concerned, they are left alone. The troubles of a foolish woman begin very early. If she is allowed to associate at all with other little girls, she bas a disagreeable time. Her contemporaries are hard on her. The young are harsh to each other, and neither boys nor girls realise the cruelty of ridicule. No doubt there is a large class of fools, both masculine and feminine, who are very knavish. Nobody likes them. But women do not even like the best sort. Let her be the best-tempered and most imperturbable fool that ever lived, let her be conscious or unconscious, whether she lament her folly or whether she trade upon it, she will have no real friends among women. Instinctively she makes an effort to please the other sex, and not seldom she succeeds. It is absurd to say that men do not value intellectual sympathy from women. They do; but they do not demand it, and they put many other things first. It is absurd to say they do not value practical ability in the other sex, especially when their comfort depends on it; but it is marvellous how indulgently they often look upon its absence. They are very apt to credit those who will faithfully reflect their conclusions with the power to understand their reasons, and many of them like to be the sole authority, at home and abroad, and would rather rule in an uncomfortable house than submit to rules in a well-regulated one. The very stupidity of some women endows them with a certain staunchness which rightly gains them affection from the opposite sex. It is a great rest to know there is one person from whom criticism is literally impossible. Oddly enough, other women do not care to know this. They are anxious to be understood, Willing sometimes to be deceived, but they crave that more delicate flattery which, while over-appreciative, is also com- prehending, and are very little touched by stupid devotions in either sex.

Again, there are certain peculiarities of character that do not go very deep which, while to men they seem of little consequence, frequently destroy a woman's popularity with her own sex. We mean, for instance, what are usually called "airs." Social airs irritate the feminine mind beyond all bearing. That subtle atmosphere of triumph which often pervades the presence of the woman who has made a marked social success is suffocating to her sisters. The ready explanation of jealousy really does not meet the case, for it Is felt equally by those who have stood all the while around the winning-post, and by those who have never started, or thought of starting, in the social race. It is due, we think, to a preoccupation with delightful details concerning no one but herself which makes all women condemn such a woman as radically unsympathetic. To many men these details are not Worth thinking of; they brush them aside and consider the disposition underneath. But to almost no women do social things seem small. Of course, social airs are by no means the only airs, but they are perhaps the only airs which do not preclude popularity with both sexes. Intellectual airs are equally disliked by both. Dr. Johnson, while generously -defending the able woman in whatever direction her ability may lie, admitted that instructive and argumentative women are truly insufferable. "Supposing," said he, "a wife to be of a studious or argumentative turn, it would be very troublesome, for instance, if a woman should continually dwell upon the subject of the Arian heresy." Women, too, respect knowledge in their sisters, but are never impressed by its display.

There is a great tendency nowadays to exaggerate differ- ences of point of view in the two sexes. The question of falling in love remains a mystery. Like heroism and religion, it is not explicable by reason alone. But so far as friendship and popularity go, so far even as lasting affection is concerned, they see almost eye to eye. Certain qualities are lovable and their opposites are hateful, and as to what these qualities are leen and women are pretty well agreed. Men, however, are more indulgent to women, and women to men, than they are to their own sex, and each would find it hard to give a reason for the selection they reciprocally make of faults to forgive. The whole question, of course, is complicated by the fact that women are the best judges of women, and men of men, and that women by men, and men by women, are often—and lastingly—befooled.