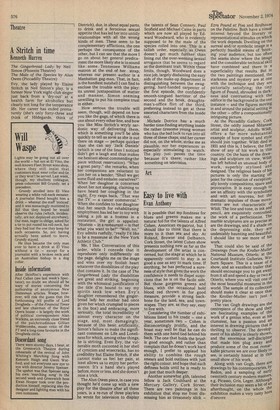 A Stritch in time

The Male of the Species by Alun Owen (Piccadilly Theatre) Evy, the lady played by Elaine Stritch in Neil Simon's play, is a former New York night-club singer just back from a 'dry-out' at a health farm for alcoholics but clearly not long for the temperance life. Her career has ended prematurely (she's only forty-three and think of Hildegarde, think of Dietrich), due, in about equal parts, to drink and a ferocious sexual appetite that has led her into untidy relationships with all the wrong kinds of men. These seem to be complementary afflictions, the one perhaps the consequence of the other, but I can see that the more I go on about her general predicament the more likely she is to sound like some Tennessee Williams matron at the end of her strap, whereas our present author is a Manhattan gag-man. That, in fact, is the handiest nutshell I can find to enclose the trouble with the play: its unreal juxtaposition of matter and manner, Simon seeming unwilling to put his complete trust in either.

How serious the trouble will seem, though, will depend on how you like the gags, of which there is one about every other line, and how you like Miss Stritch's wryly sardonic way of delivering them, which is something you'll be able quickly to tell as soon as she is out there on stage — perhaps quicker than she can say 'Jack Daniels' (which is one of the lines I noticed didn't get a laugh and thus makes me hesitant about commendingthe piece without reservation). "What a great party," she remarks, when her companions are reluctant to join her on a bender, "Shall we get some fluid and embalm ourselves?" When her daughter is concerned about her not sleeping, claiming to have heard her coughing in the night, Evy rasps back, "That was the TV — a cancer commercial." When she confides to her daughter that her search for rehabilitating employment has led her to toy with taking a job as a hostess in a restaurant, the girl is appalled: "Hostess — in a restaurant — is that what you want to be?" "Well, no," Evy admits ruefully, "really I'd like to be a masseuse at the New York Athletic Club."

Me, I like. Conversation of this order, while I concede that it reproduces only indifferently on the page, delights me on the stage and Wins over my foolish heart whatever the disabilities of the play that contains it. In the case of The Gingerbread Lady the disabilities are great and striking, beginning with the whimsical justification of the title (I'm bound to say my spirits sank low when Evy's daughter remembered the gingerbread lady her mother had once given her which crumpled to pieces in the box) and embracing, more seriously, the total incredibility of almost every character on the stage, and, most damagingly, because of this basic artificiality, Simon's failure to make the significant comment on Life and Loneliness for which, among other things, he is striving. Even Evy, the vulnerable moth cocooned in her shell of cynicism and wisecracks, has no credibility but Elaine Stritch, if she cannot make us feel her pain, at least allows us to enjoy her performance. It's a hand she's played before, more or less, and she doesn't miss a trick.

The Alun Owen piece, in case you thought he'd come up with a new play for the theatre after all these years, is a re-run of three playlets he wrote for television to display the talents of Sean Connery, Paul Scofield and Michael Caine in parts which are now all played by Edward Woodward, who is evidently supposed to be the male of the species rolled into one. This is a tallish order, especially as Owen doesn't get much further than lining out the over-weening sexual arrogance that he seems to regard as the dominant trait. Within these limits, though, Woodward does a nice job, largely disdaining the easy aids of the make-up department in distinguishing between the swaggering, hard-handed carpenter of the first episode, the confidently smooth-tongued barrister of the second and the brisk, draughtsman's-office flirt of the third, preferring instead to get at these assorted characters from the inside out.

Michele Dotrice has a much harder time finding anything inside the rather tiresome young woman who has the bad luck to run into all three of these chaps, and her career did not, on the whole, strike me as plausible, nor her experiences as especially stimulating to watch. The play just passes the time because it's there; rather like something on television.