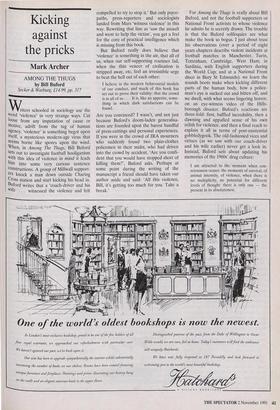 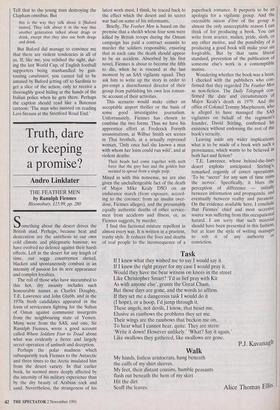 Kicking against the pricks

Writers schooled in sociology use the word 'violence' in very strange ways. Cut loose from any imputation of cause or motive, adrift from the tug of human

,gency, 'violence' is something begot upon itself, a mysterious modern-age virus that seems borne like spores upon the wind. When, in Among The Thugs, Bill Buford sets out to investigate football hooliganism With this idea of violence in mind it leads him into some very curious sentence constructions. A group of Millwall support- ers knock a man down outside Charing Cross station and start kicking his head in. I3uford writes that a 'coach-driver and his Wife . . . witnessed the violence and felt

compelled to try to stop it.' But only psyco- paths, press-reporters and sociologists landed from Mars 'witness violence' in this way. Rewriting that line as 'saw the assault and went to help the victim', you get a feel for the core of practical intelligence which is missing from this book.

But Buford really does believe that 'violence' is something in the air, that all of us, when our self-supporting routines fail,

Mark Archer when the thin veneer of civilisation is

stripped away, etc, feel an irresistible urge to beat the hell out of each other:

I believe in the modern behavourial models of our conduct, and much of this book has set out to prove their validity: that the crowd is in all of us. . . It is, like an appetite, some- thing in which dark satisfactions can be found.

Are you convinced? I wasn't, and not just because Buford's doom-laden generalisa- tions are founded upon the barest handful of press-cuttings and personal experiences. If you were in the crowd of IRA mourners who suddenly found two plain-clothes policemen in their midst, who had driven into the crowd by accident, 'Are you confi- dent that you would have stopped short of killing them?', Buford asks. Perhaps at some point during the writing of the manuscript a friend should have taken our author aside and said: 'All this violence, Bill, it's getting too much for you. Take a break.'

For Among the Thugs is really about Bill Buford, and not the football supporters or National Front activists to whose violence he admits he is secretly drawn. The trouble is that the Buford soliloquies are what make the book so bogus. I just about trust his observations (over a period of eight years chapters describe violent incidents at football matches in Manchester, Turin, Tottenham, Cambridge, West Ham; in Sardinia, with English supporters during the World Cup; and at a National Front disco in Bury St Edmunds): we learn the sounds boots make when kicking different parts of the human body, how a police- man's eye is sucked out and bitten off, and we dwell, with what seems lingering horror, on an eye-witness video of the Hills- borough disaster. Buford's reactions are three-fold: first, baffled incredulity, then a dawning and appalled sense of his own relish for violence, and then a final reach to explain it all in terms of post-existential gobbledygook. The old-fashioned vices and virtues (as we saw with our coach-driver and his wife earlier) never get a look in. Instead, Buford sets about updating his memories of the 1960s' drug culture:

am attracted to the moment when con- sciousness ceases: the moments of survival, of animal intensity, of violence, when there is no multiplicity, no potential for different levels of thought: there is only one — the present in its absoluteness.

Tell that to the young man destroying the Clapham omnibus. But

But Buford did manage to convince me that there are violent tendencies in all of us. If, like me, you relished the sight, dur- ing the last World Cup, of English football supporters being manhandled by gun- touting carabinieri, you cannot fail to be amused by Buford jetting off to Sardinia to get a slice of the action, only to receive a thoroughly good hiding at the hands of the Italian police when he gets there. Perhaps the caption should read like a Bateman cartoon: The man who insisted on reading Levi-Strauss at the Stretford Road End.'