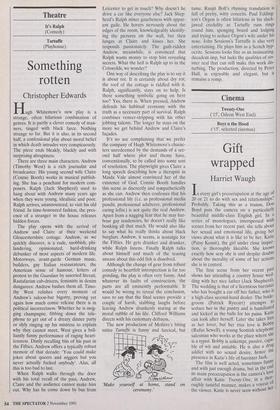 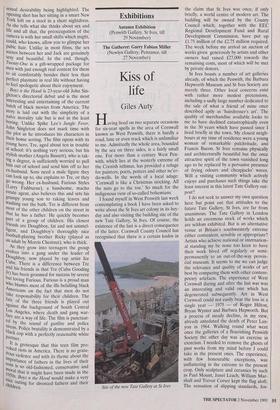 Is every girl's preoccupation at the age of 20 or 21 to do with sex and relationships? Probably. Taking this as a truism, Doe Boyd puts the camera on a particularlY beautiful middle-class English girl. In a series of monologues, interspersed with scenes from her recent past, she tells about her sexual and emotional life, giving her views about what it is like to be her. Katie (Patsy Kensit), the girl under close inspec- tion, is thoroughly likeable. She knows exactly how sexy she is and despite doubts about the morality of some of her actions she is in control.

The first scene from her recent past shows her attending a country house wed- ding with her nice father (Jack Shepherd). The wedding is that of a licentious barrister who has bought a car off her father, who is a high-class second-hand dealer. The bride' groom (Patrick Ryecart) attempts to seduce her in the pantry and is humiliated and kicked in the balls for his pains. Katie can look after herself. Later she takes hula as her lover, but her true love is Bobby (Rufus Sewell), a young Scottish telephone salesman who works at the place where she is a typist. Bobby is unkempt, passive, capa- ble of wit and amiable. He is also a drug addict with no sexual desire, hence the presence in Katie's life of barrister Jack. The film is well acted, sometimes funtlYd and with just enough drama, but in the en its main preoccupation is the camera's love affair with Katie. Twenty-One, in a that: oughly tasteful manner, makes a voyeur ot the viewer. Katie is never seen without her

sexual desirability being highlighted. The opening shot has her sitting in a smart New 'York loft on a stool in a short nightdress. As she tells what she thinks about sex and life and all that, the preoccupation of the camera is with her small shifts which might, could, who knows, allow you to glimpse her Pubic hair. Unlike in most films, the sex scenes between her and Jack are genuinely sexy and beautiful. In the end, though, Twenty-One is a gift-wrapped package for men with just enough real content for them to sit comfortably besides their less than Perfect playmate in real life without having to feel apologetic about their enjoyment.

Boyz n the Hood is 23-year-old John Sin- gleton's directorial debut and is the most interesting and entertaining of the current batch of black movies from America. The story is laid out with the simplicity of a naive morality tale but is not in the least boring. Unlike Spike Lee's Jungle Fever, John Singleton does not mark time with the plot as he introduces his characters in their home setting. The film opens with its Young hero, Tre, aged about ten in trouble at school: it's nothing very serious, but his Stylish mother (Angela Bassett), who is tak- ing a degree, is sufficiently worried to pull him out of school and send him off to her ex-husband. Sons need a male figure they can look up to, she explains to Tre, or they go wrong. Her ex-husband, Furious Styles (Larry Fishburne), a handsome, macho estate agent, also believes this and sets his grumpy young son to raking leaves and washing out the bath. Tre is different from most of the other children on the street in that he has a father. He quickly becomes Part of a group of children. His closest friends are Doughboy, fat and not unintel- ligent, and Doughboy's thoroughly nice football-playing brother Ricky (played as an adult by Morris Chestnut), who is thick. As they grow into teenagers the group evolves into a gang under the leader of r)oughboy, now played by rap artist Ice Cube. There is a difference between Tre and his friends in that Tre (Cuba Gooding Jr) has been groomed for success by severe but loving Furious. Furious is a proud man who blames most of the ills befalling black Americans on the fact that men do not take responsibility for their children. The fate. of the three friends is played out against the background of South Central °5 Angeles, where death and gang war- fare are a way of life. The film is punctuat- ed by the sound of gunfire and police skl,rens. Police brutality is demonstrated by a lack cop with a perfectly reasonable white Partner.

v It is grotesque that this teen film pro- oked riots in America. There is no gratu- it°us violence and with its theme about the slUPortance of fathers in the lives of their 211a is so old-fashioned, conservative and Oral that it might have been made in the

50s. Boyz n the Hood would make a very

lee outing for divorced fathers and their children.