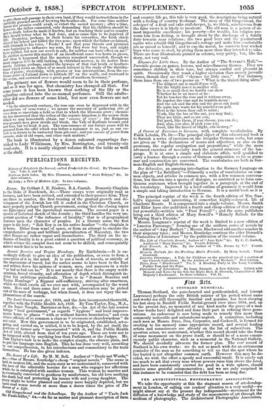 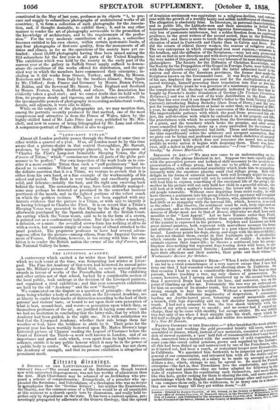 We take the opportunity at this the stagnant semen of art-develop- ment in London, of calling our readers' attention to a very useful—we mnght almost say at the present day indispensable—movement for the diffusion of a knowledge and study of the monuments of art through.the medium of photography. The Architectural Photographic Association, constituted in the May of last year, professes as its objects "1, to pro- cure and supply to subscribers photographs of architectural works of all countries ; 2, to form a collection of such photographs for the Associa- tion, and, if thought desirable, to exhibit them ; 3, and in any other manner to render the art of photography serviceable to the promotion of the knowledge of architecture, and to the requirements of the profes- sion." For the very moderate contribution of a guinea, a subscriber becomes entitled to his own choice, within certain systematic limits, of any four photographs of first-rate quality, from the monuments of all times and climes, so far as the operations of the society have yet ex- tended : about 10,000 photographs having thus been issued among the 915 subscribers for the first year in all parts of the United Kingdom. The exhibition which was held by the society in the early part of the current year at the gallery in Suffolk Street amply sufficed to demon- strate the excellence of the works offered for distribution, and the spi- rited way in which the members have commenced their enterprise; in- cluding as it did works from Greece, Turkey, and Malta, by Messrs. Robertson and Beato ; from Italy by the brothers Alinari; from Spain by Mr. Clifford; from France and Germany by Messrs. Bison Freres, M. Baldus, and the Reverend Mr. Simon; from England and Scotland by Messrs. Fenton, Gutch, Bedford, and others. The Association has evidently taken a good start ; and we cannot doubt that its hold will be firm., its progress steady and vigorous, and its influence excellent. On the incomparable powers of photography in recording architectural works, details and adjuncts, it were idle to dilate.

While on the subject of the photographic art, we may mention that, among the portraits recently produced by that method, one of the most conspicuous and attractive is from the Prince of Wales, taken by the highly-skilled hand of Mr. Lake Price last year, published by Mr. Mit- chell, and now in course of being lithographed by Mr. Lane and others. A companion-portrait of Pripme Alfred is also to appear.