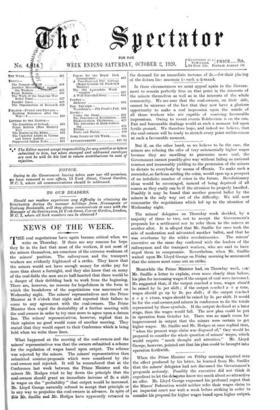 Meanwhile the Prime Minister had, on Thursday week, rcn; Mr.

Smillie a letter to explain, even more clearly than before, his plan for increasing wages if the output of coal were increaser. He suggested that, if the output reached x tons, wages should

be raised by Is. per shift ; if the output reached x y tons, wages should go up by 2s. per shift ; if the output reached x y z tons, wages should be raised by 3s. per shift. It would be for the coal-owners.and miners in conference to fix the totals represented by these symbols. If the output declined at a later stage, then the wages would fall. The new plan could be put in operation from October 1st. There was so much room for improvement in output that the miners were certain to get higher wages. Mr. Smillie and Mr. Hodges at once replied that, " when the present wage claim was disposed of," they would be prepared to consider the whole question of miners' wages, which would require " much thought and attention." Mr. Lloyd George, however, pointed out that his plan could be brought into operation forthwith.