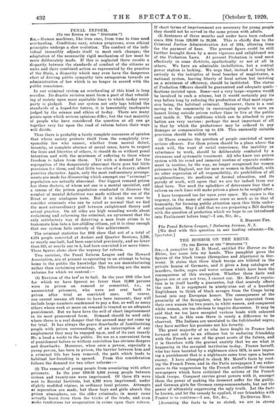 Ste —Human machines, like iron ones, from time to time need overhauling. Conditions vary, science progresses, even ethical principles undergo a slow evolution. The conduct of the indi- vidual insensibly adjusts itself to meet such changes; the adaptation of the necessarily rigid mechanism of law must be more deliberately made. If this is neglected there results a disparity between the standards of conduct of the citizens as units and their combined action as represented by the practice of the State, a disparity which may even have the dangerous effect of driving public sympathy into antagonism towards an administration of law which is no longer in accord with the public conscience.

In our criminal system an overhauling of this kind is long overdue. Its drastic revision must form a part of that rebuild- ing of society upon more equitable lines to which to-day every party is pledged. But our system not only lags behind the standards of a hoped-for future, it is lamentably inadequate judged by the science and ethics of to-day. There are many points upon which serious opinions differ, but the vast majority of people who have considered the question at all can go together very far upon the road of reform before their ways will divide.

Thus there is probably a fairly complete consensus of opinion that where society protects itself from the completely irre- 'Tensible few who cannot, whether from mental defect, insanity, or complete absence of moral sense, learn to respect the lives and liberties of others, it should do so -without penal intention and with the minimum of suffering to those whose freedom is taken from them. Yet with a demand for the segregation of the dangerously abnormal there goes but little provision for them, and that little too often of a dreary, almost punitive character. Again, only the most rudimentary arrange- ments are made for discovering which amongst our "criminal " population are actually abnormal. Our biggest remand prison has three doctors, of whom not one is a mental specialist, and a census of the prison population conducted to discover the number of mental defectives was mode without the use of the Binet or any analogous tests. But it is when we come to consider criminals who can be rated as normal that we find the most extraordinary gulf between enlightened theory and actual practice. On all sides are high sounding words about reclaiming and reforming the criminal, an agreement that the only satisfactory way of deterring a man from crime is to transmute him into a law-abiding citizen, yet it is clear enough that our system fails entirely of this achievement.

Two societies, the Penal Reform League and the Howard Association, are at present co-operating in an attempt to bring home to the public the knowledge that we are manufacturing rather than reclaiming criminals. The following are the main reforms for which we contend:—

(I) Revision of the lacer as to bail. In the year 1918 (the last for which wo have figures) no fewer than 12,000 persons were in prison on remand or committal, i.e., as unconvicted prisoners, who were not sent back to prison after trial as convicted ones. Of course, one cannot assume all these to have been innocent; they will include large numbers condemned to pay a fine, as well as many others whose week or more on remand is treated as an adequate punishment. But we have here the evil of short imprisonment in its most pronounced form. Remand should be used only where there is a real danger that the accused may not come up for trial. It has always the grave drawbacks of familiarizing people with prison surroundings, of an interruption of any employment they may be engaged up.m, and of its cost (nearly 29s. a head a week) to the public. Its use as a convenient form of punishment before or without conviction has obvious dangers and drawbacks. Moreover, when once a person, especially a young person, has been in prison, the barrier between him and a criminal life has been removed, the path which leads to

habitual law-breaking is opened. From this consideration follows. the demand for two other reforms :— (2) The removal of young people from associating with other prisoners. In the year 1918-19 5,066 young people between sixteen and twenty-one were imprisoned. Of these 674 were sent to Borstal Institute, but 4,392 were imprisoned, under slightly modified regime, in ordinary local prisons. Attempts

at separation are made, but these boys and girls absorb the prison atmosphere, see the older criminals; in many cases actually learn from them the tricks of the trade, and even make rendezvous for co-operation in crime upon their release.

If short terms of imprisonment are necessary for young people they should not be served in the same prison with adults.

(ffi Sentences of three months and under have been reduced since 1914 from 120,000 to 20,500. This is chiefly due to the Criminal Justice Administration Act of 1914, allowing time

for the payment of fines. The present figure could be still further brought down by a more vigorous and enlightened use of the Probation Laws. At present Probation is used most effectively in some districts, apathetically or not at all in others. We have an admirable installation, but a central power station is lacking. We urge that, instead of being left entirely to the initiative of local benches of magistrates, a national system, leaving liberty of local action but insisting on a minimum of efficiency, should be instituted. The status of Probation Officers should be guaranteed and adequate quali- • fications insisted upon. Some—not a very large—expense would be involved in such a scheme, but it would certainly pay its way before long by reducing the production of that most expen- sive being, the habitual criminal. Moreover, there is a real saving to the community in encouraging people to earn an honest living outside prison rather than to live at the public cost inside it. The conditions which can be attached to pro- bation are very various: perhaps the most important of all is that by which the probationer may be ordered to pay damages or compensation up to £10. This eminently suitable provision should be widely used.

(4) There remains the question of people convicted of more serious offences. For them prison should be a place where the weak will, the want of social conscience, the inability or reluctance to work, should be deliberately combated by a strenuous and systematic treatment. All who know our prison system with its cruel and immoral routine of separate confine- ment (a routine, by the way, no longer recognised for women prisoners in England, nor for men or women in Scotland), with its utter repression of all responsibility, its prohibition of all neighbourliness, its modicum of formal education, and its parody of work, will agree that we are far indeed from our ideal here. Nor need the upholders of deterrence fear that a reform on such lines will make prison a place to be sought after.

I have trespassed too far upon your space. My excuse is the urgency, in the name of common sense as much as in that of humanity, for focusing public attention upon this little under- stood question. May I add that we are preparing a Bill dealing with the question of probation which we hope to see introduced into Parliament before lone—I am, Sir, &c.,

[We deal with this question in our leading columns.—ED. Spcetstot.]