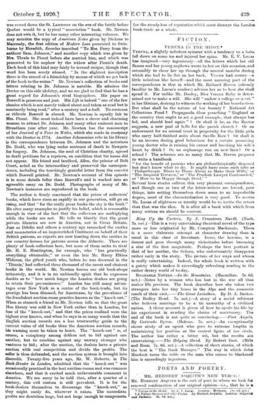 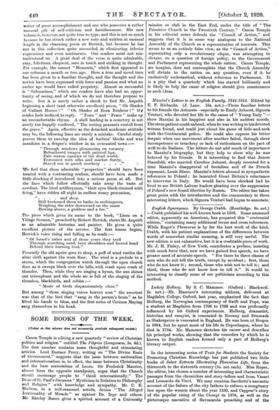 MR. HERBERT ASQUITH'S NEW VERtE.t MR. HERBERT ASQUITH is the sort of poet to whom we look for renewed confirmation of our original opinion—i.e., that he is e • Verona in the Midst. By E. V. Lucas. London Methuen. tbs. Gd. net.) t A Village Seeman and other Poems. By Herbert Asquith. London didgwira rind Jackson. Se. sd. net.l

writer of great accomplishment and one who possesses a rather unusual gift of self-criticism and fastidiousness. His new volume is, however, not quite true to type, and this is not so much because be has struck rather a new note and written at unusual length in the charming poem on Herrick, but because he has not in this collection quite succeeded in eliminating inferior expressions and even sentiments. Our readers must not mis- understand us. A great deal of the verse is quite admirable, easy, felicitous, eloquent, sure in touch and striking in thought. For example, the sonnet " Moments," which first appeared in our columns a month or two ago. Here a true and novel turn has been given to a familiar thought, and the thought and the notion have been expressed with force and passion and what an earlier age would have called propriety. Almost as successful is " Submarines," which our readers have also had an oppor- tunity of seeing, and of which we do not therefore propose to write. But it is surely rather a shock to find Mr. Asquith beginning a short (and otherwise excellent) poem, " Oh Shades of Gallant Horace ! " " Oh Shades of Rosa Bonheur ! " the reader feels inclined to reply. " Trees " and " Peace " make up an uncomfortable rhyme. A shell landing in a cemetery is not surely too happily rendered, " The resting peasants rooted from the grave." Again, effective as the detached academic attitude may be, the following lines are surely a mistake. Careful study proves them to envelop the idea of barbers' blocks and wax manikins in a draper's window in an evacuated town :-

" Through windows glimmering on vacancy Befeathered images with painted lips, Palo waxen vanities of the dead world, Festooned with silks and market finery, Stared out in garish mockery . . . ."

We feel that these admirable "properties" should have been treated with a contrasting realism, should have been made a little shocking if introduced into a serious poem at all. But the lines 'which follow effectually take away the taste of sawdust. The tired artillerymen, "their eyes black-rimmed with firing," have ridden all night in endless weary procession, . . . and sleep

Still beckoned them to bathe in nothingness, Weighing the rider downward on the mane Bowing above, a goddess and a foe."

The piece which gives its name to the book, "Linos on a Village Sermon," preached by Robert Herrick, shows Mr. Asquith as an admirable historian and painter. He gives a quite excellent picture of the service. The first lesson begins, Herrick's voice rising and falling as he reads :-

" Of Israel's tribes and of those years they trod

Through scorching sand, bent shoulders and bowed head Behind their burning God."

Presently the old squire goes to sleep, a puff of wind rustles the altar cloth against the worn floor. The wind is a prelude to a storm, which the congregation watch through the open church door as it sweeps black over the hills, with crash upon crash of thunder. Then, while they are singing a hymn, the sun shines out triumphant and the whole air is full of the singing of the thrushes, blackbirds, and robins :—

But among "those singing voices heaven sent" the sweetest was that of the bird that "sang in the parson's brain" as he lifted his hands to bless, and the first notes of Corinna Maying sang themselves in his head.