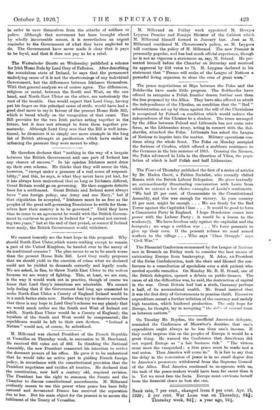 Page 3, 2 October 1920 — Tho Times of Thursday published the first of a series
Close

Tho Times of Thursday published the first of a series

of articles by Dr. Haden Guest, a Fabian Socialist, who recently visited Russia with the British Labour Delegation. Ho gives textually an extraordinarily illuminating conversation with Lenin from which we extract a few choice examples of Lenin's sentiments. "We had 25 per cent. of Communists in the Constitutional Assembly, and this was enough for victory. In your country 15 per cent. might be enough . . . We are firmly for the Red Terror against the Capitalist Class . . . It would be good to form a Communist Party in England. I hope Henderson comes into power with the Labour Party ; it would be a lesson to the workers (!). We have freedom only against the capitalist and the bourgeois; we wage a ruthless war . . . We force peasants to give up their corn. If tho peasant refuses we send armed workers to the village . . . Who says ' Class Struggle' says Civil War.' "