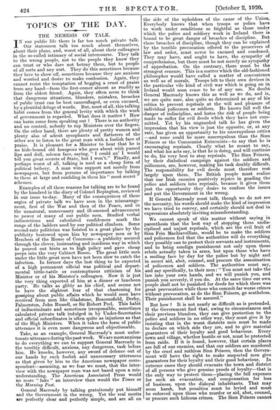 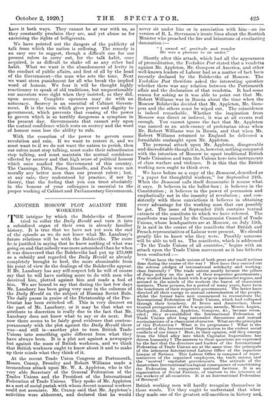 THE NEMESIS OF TALK.

IN our public life there is far too much private talk. Our statesmen talk too much about themselves, about their plans, and, worst of all, about their colleagues in the so-called intimacy of social intercourse. They talk to the wrong people, not to the people they know they can trust or who dare not betray them, but to people of all sorts and any sort. They do this sometimes because they love to show off, sometimes because they are anxious and worried and desire to make confession. Again, they cannot resist the temptation of begging a crust of praise from any hand—from the first-corner almost as readily as from the oldest friend. Again, they often seem to think that dangerous situations, blunders, mistakes, breaches of public trust can be best camouflaged, or even excused, by a plentiful deluge of words. But, most of all, this talking habit comes from the general levity with which the work of government is regarded. What does it matter ? How can harm come from speaking out 1 There is no authority and no control, nobody to rap Ministers over the fingers. On the other hand, there are plenty of pretty women and plenty also of adroit sycophants and flatterers of the other sex to listen to the great man with a foolish face of praise. It is pleasant for a Minister to hear that he is no hide-bound old bourgeois who goes about with pursed lips and dull, solemn face, saying, I could an' I would tell you great secrets of State, but I won't." Finally, and perhaps worst of all, talking is used as a cheap form of political bribery. A man wins support not merely from newspapers, but from persons of importance by talking to them at large and confiding in them his " most secret' schemes.

Examples of all these reasons for talking are to be found by the hundred in the diary of Colonel Repington, reviewed in our issue to-day. Many of the consequences of these orgies of private talk we have seen in the mismanage- ment, first of the War and then of the Peace, and in the unnatural, unnecessary and ill-omened advancement to power of many of our public men. Studied verbal indiscretions and calculated confidences mark the rungs of the ladders used by our political climbers. Some second-rate politician was hoisted to a great place by the publicity bestowed upon him by newspaper men or by Members of the House of Commons—a publicity secured i through the clever, insinuating and insidious way in which he poured out hints as to high policy and gave cheap peeps into the very Cabinet Room. The great little men under the little great men have not been slow to catch the infection. In former days the last thing to be expected of a high permanent official was political and depart- mental tittle-tattle or contemptuous criticism of his Minister or of his Minister's colleagues. Now it is just the very thing expected of him at a dinner or luncheon party. He talks as glibly as his chief, and seems not to have the slightest fear of that chastening for gossiping about public affairs which he would soon have received from men like Gladstone, Beaconsfield, Derby, Palmerston, John Russell, or Sir Robert Peel. This habit of indiscriminate and sometimes irresponsible, sometimes calculated private talk indulged in by Under-Secretaries and official subordinates is often quite as injurious as that of the High Ministers. When it takes the form of public utterance it is even more dangerous and objectionable.

Take, as an example, General Macready's most unfor- tunate utterance during the past week. We are most anxious to do everything we can to support General Macready in the terribly difficult, anxious, nay dangerous, task before him. Ho knocks, however, any sword of defence out of our hands by such foolish and unnecessary utterances as that given by him to the American newspaper corre- spondent—assuming, as we fear we must, that the inter- view with the newspaper man was not based upon a mis- understanding. The American Associated Press would no more " false " an interview than would. the Times or the Morning Post.

General Macready by talking gratuitously put himself and the Government in the wrong. Yet the real merits are perfectly clear and perfectly simple, and are all on the side of the upholders of the cause of the Union. Everybody knows that when troops or police have to work under conditions so frightful as those under which the police and soldiery work in Ireland there is bound to be great danger of breaches of discipline. But these breaches of discipline, though they can be explained by the terrible provocation offered to the preservers of law and order, must never be excused and condoned. They may have, and ought to have, the sympathy of comprehension, but there must be not merely no sympathy of approbation. On the contrary, there must be the strongest censure. This is a matter which the old-fashioned philosopher would have called a matter of convenience as well as of morals. Troops left to their own devices in the particular vile kind of civil war which is going on in Ireland would soon cease to be of any use. No doubt General Macready knows this as well as we do, and is, we are quite sure, also quite as determined as any of his critics to prevent reprisals at the will and pleasure of individual policemen or soldiers. He knows full well the • danger of indiscipline, and hates the risk of people being made to suffer for evil deeds which they have not com- mitted. Yet by his unguarded talk he has given the impression that his view is just the opposite, or, at any rate, has given an opportunity to his unscrupulous critics —and none could be more unscrupulous than the Sinn Feiners or the Communist Extremists—to say that he is encouraging reprisals. Clearly what he meant to say, and what his acts say, is that he is doing, and will continue to do, his very best to stop reprisals. The Sinn Feiners, by their diabolical campaign against the soldiers and policemen, are, however, making his task doubly difficult. The responsibility for evil deeds must therefore rest largely upon them. The British people must realize that our Irish enemies positively rejoice in goading the police and soldiers into reprisals, because it gives them just the opportunity they desire to confuse the issues and put the Government in the wrong.

If General Macready must talk, though we do not see the necessity, his words should make the kind of impression we have tried to convey, and certainly should not deal in expressions absolutely inviting misunderstanding.

We cannot speak of this matter without saying in parenthesis that the best way of stopping these undis- ciplined and unjust reprisals, which are the evil fruit of Sinn Fein Machiavellism, would be to make the soldiers and policemen feel that the authorities will do everything they possibly can to protect their servants and instruments, and to bring condign punishment not only upon those rebels actually taken in arms, but upon those who have a smiling face by day for the police but by night and in secret aid, abet, counsel, and procure the assassination of policemen and soldiers. The authorities must say, and say specifically, to their men : " You must not take the law into your own hands, and we will punish you, and punish you severely, if you do. At the same time our own people shall not be punished for deeds for which there was great provocation while those who commit far worse crimes without provocation, as do the Sinn Feiners, go scatheless. Their punishment shall be assured."

But how ? It is not nearly so difficult as is pretended. If the Government find that, owing to circumstances and their previous blunders, they can give protection to the police and soldiers in no other way, they must give it by insisting that in the worst districts men must be made to declare on which side they are, and to give material guarantees of their loyalty and good behaviour. Every town and village, whether hostile or not, must be protected from raids. If it is found, however, that certain places are full of our enemies, and that our soldiers are murdered by the cruel and ruthless Sinn Feiners, then the Govern- ment will have the right to make suspected men give guarantees for their loyalty and their good behaviour. In extreme cases they should evacuate the town and district of all persons who give genuine proofs of loyalty—that is the only way to protect them—placing the full expenses for such an evacuation, and compensation for loss of business, upon the disloyal inhabitants. That may seem harsh, but penalties must be levied and must be enforced upon those who murder or aid, abet, counsel, or procure such hideous crimes. The Sinn Feiners cannot have it both ways. They cannot be at war with us, as they constantly proclaim they are, and yet abuse us for exercising the rights of belligerents.

We have pointed out the dangers of the publicity of talk from which the nation is suffering. The remedy is an easy one to suggest, though a difficult one for our present rulers to carry out, for the talk habit, once acquired, is as difficult to shake off as any other bad habit. What we want is the abandonment of levity in the conduct of public affairs, and first of all by the head of the Government—the man who sets the tone. Next we want stern punishment for all who break the implied word of honour. We fear it will be thought highly reactionary to speak of old traditions, but unquestionably our ancestors were right when they insisted, as they did, upon secrecy. Complete openness may do' with an autocracy. Secrecy is an essential of Cabinet Govern- ment. It is the tonic which gives power and dignity to government, which prevents that ceasing of the power to govern which is so terribly dangerous a symptom in the present day. Governments that cannot rely upon the mutual confidence which rests on secrecy and the word of honour soon lose the ability to rule.

With the cessation of the power to govern come revolution and ruin. If we want to restore it, and we must want to if we do not want the nation to perish, then our rulers must stop talking, must make their subordinates stop talking, and must maintain the mutual confidence effected by secrecy and that high sense of political honour which once marked the Government of this country. The Cannings, Pitts, Foxes, Russells, and Peels were not morally any better men than our present rulers ; but, at any rate,- they understood by practice, if not by theory, that the feeling that you can trust absolutely in the honour of your colleagues is essential to the proper working of Cabinet and Parliamentary Government.