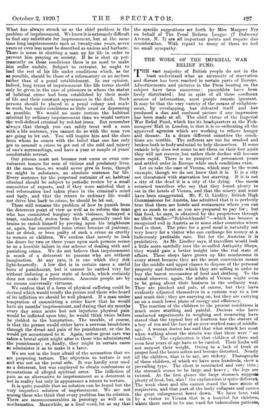 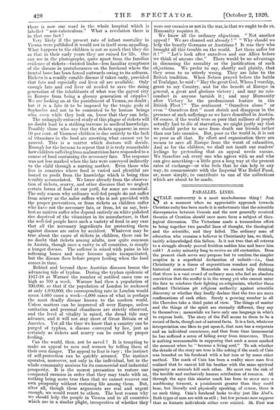 THE WORK OF THE IMPERIAL WAR RELIEF FUND.

THE vast majority of British people do not in the least understand what an extremity of starvation and disease has been reached in certain parts of Europe. Advertisements and pictures in the Press bearing on the subject have been numerous ; pamphlets have been freely distributed ; but in spite of all these confluent sources of information, most people remain ignorant. It may be that the very variety of the means of enlighten- ment, by overlapping, has defeated itself and has produced a dim and confused picture if any impression has been made at all. The chief virtue of the Imperial War Relief Fund, which has its headquarters at the Fish- mongers' Hall in London, is that it is co-ordinating all the approved agencies which are working to relieve hunger and disease. In a dozen different countries the condi- tions are terrible. The sufferers are too far crushed and broken both in bodyandmind to help themselves. If some outside help does not come to set them on their feet again they will not recover, but rather their decline will become more rapid. There is no prospect of permanent peace and settled order in Europe while such conditions exist.

Let us take the case of Vienna, which may be the worst example, though we do not know that it is. It is a city not threatened with starvation but starving. If it is not a city of the dead it is a city of the dying. One meets returned travellers who say that they found plenty to eat in the hotels of Vienna, and that the misery and want have been exaggerated. Mr. F. 0. Lindley, British High Commissioner for Austria, has admitted that it is perfectly true that there are hotels and restaurants where you can get as much to eat as you are prepared to pay for ; but this food, he says, is obtained by the proprietors through an illicit traffic---“Schleichhandel "—which has become a recognized evil in Austria as in some other countries where food is short. The price for a good meal is naturally not very heavy for a visitor who can exchange his money at a ludicrously profitable rate. But for the Austrian it is prohibitive. As Mr. Lindley says, if travellers would look a little more carefully into the so-called Antiquity Shops, they would gain a better insight into the real state of affairs. These shops have grown up like mushrooms in every street because they are the most convenient means for the middle and upper classes to dispose of the personal property and furniture which they are selling in order to buy the barest necessaries of food and clothing. To the casual observer, again, the adults of Vienna might seem to be going about their business in the ordinary way. They are pinched and pale, of course, but they have evidently adjusted themselves in a curious way to a low and scant diet ; they are carrying on, but they are carrying on on a much lower plane of energy and efficiency. The reaction of the children to the present conditions is much more startling and painful. Doctors who have conducted experiments in weighing and measuring have stated that the typical boy of fourteen has the stature of a boy of ten and the face of an over-worked man of middle- age. A woman doctor has said that what struck her most when walking about the streets was that there were " no toddlers." The explanation is that children of three and even four years of age have to be carried. Their limbs will not support their weight. Owing to a lack of fresh or proper food the bones soften and become distorted. Nearly all the children, that is to say, are rickety. Photographs of these children, of which we have seen hundreds, show a prevailing type. The chest is contracted and very thin ; the stomach seems to be large and heavy ; the legs are twisted. At the first glance the large stomach suggests plenty of food, but, alas 1 the explanation is quite different. The weak chest and ribs cannot stand the bare strain of respiration, and that part of the body collapses and causes the great enlargement lower down. We have been told by a visitor to Vienna that in a hospital for children, where there used to be one ward for tuberculous patients, there is now one ward in the whole hospital which is labelled " non-tuberculous." What a revelation there is in that one fact !

Very likely if the present rate of infant mortality in Vienna were published it would not in itself seem appalling. What happens to the children is not so much that they the as that in their early years they are ruined for life. One can see in the photographs, quite apart from the familiar evidence of rickets—twisted limbs—less familiar symptoms of the disease in protuberances on the forehead where the frontal bond has been forced outwards owing to its softness. Rickets is a readily curable disease if taken early, provided that fats and especially cod liver oil are available. Only enough fats and cod liver oil needed to save the rising generation of the inhabitants of what was the gayest city in Europe from being a gloomy generation of cripples I We are looking on at the punishment of Vienna, no doubt ; but it is a fate fit to be imposed by the tragic gods of Sophocles and not to be consented to by human beings who, even while they look on, know that they can help.

The unhappily enforced study of this plague of rickets will no doubt lead to a striking increase in medical knowledge. Possibly those who say that the rickets apparent in some CO per cent, of Viennese children is due entirely to the lack of vitamines in the food are asserting what cannot yet be proved. This is a matter which 'doctors will decide. Enough for the layman to repeat that it is truly remarkable how children suffering from malnutrition have responded to a course of food containing the necessary fats. The response was not less marked when the fats were conveyed indirectly to the child through a nursing mother. Even those who live in countries where food is varied and plentiful are bound to profit from the knowledge which is being thus terribly accumulated. We know already from the observa- tion of rickets, scurvy, and other diseases that we neglect certain forms of food at our peril, for some are essential. The only reason why ordinary well-fed people do not suffer from scurvy as the sailor suffers who is not provided with the proper preventives, or from rickets as children suffer who have not the necessary fats, or from, let us say, beri- beri as natives suffer who depend entirely on white polished rice deprived of the vitamines in its manufacture, is that the well-fed people have such a variety of food in any case that all the necessary ingredients for protecting them against disease are eaten by accident. Whatever may be true about the cause of rickets in children, there can be no doubt that rickets among adults, now quite common in Austria, though once a rarity in all countries, is simply a hunger disease. The sufferer is seized with pains in his softening bones and may become quite incapacitated, but the disease flees before proper feeding when the food comes in time.

Behind and beyond these Austrian diseases looms the advancing tide of typhus. During the typhus epidemic of 1917-18 at Warsaw the number of notified cases rose as high as 700 a week. Warsaw had then a population of 700,000, so that if the population of London be reckoned at only 4,000,000, the corresponding rate in London would mean 4,000 cases a week-4,000 cases of what is perhaps the most deadly disease known to the modern world. Unless matters can be improved all over Europe, unless sanitation and personal cleanliness are strictly observed, and the level of vitality is raised, the dread tide may advance, and it will not stay short of Great Britain or of America. Yet all the time we know that a country can be purged of typhus, a disease conveyed by lice, just as certainly as nckets and scurvy can be cured by proper feeding.

Can the world, then, not be saved ? It is tempting to make an appeal to men and women by telling them of their own danger. The appeal to fear is easy ; the instinct of self-protection can be quickly aroused. The instinct operates, moreover, not only in the individual, but in the whole community anxious for its commercial and industrial prosperity. It is the merest precaution to restore our conquered enemies in order that they may trade with us, nothing being more true than that we cannot recover our own prosperity without restoring life among them. But, after all, though these arguments are real and urgent enough, we would resort to others. The best reason why we should help the people in Vienna and in all countries which are in a similar plight, irrespective of whether they were our enemies or not in the war, is that we ought to do so. Humanity requires it.

We know all the ordinary objections. " Not another appeal We are cleaned out already ! " " Why should we help the beastly Germans or Austrians ? It was they who brought all this trouble on the world. Let them suffer for it ! " " Let's look after ourselves and our Allies before we think of anyone else." There would be no advantage in discussing the morality or the justification of such objections. We prefer to say, shortly and plainly, that they seem to us utterly wrong. They are false to the British tradition. When Nelson prayed before the battle of Trafalgar, he said : "May the great God, Whom I worship, grant to my Country, and for the benefit of Europe in general, a great and glorious victory ; and may no mis- conduct in anyone tarnish it ; and may Humanity after Victory be the predominant feature in the British Fleet !" The sentiment " Ourselves alone " or even " Ourselves first " must shrink and disappear in the presence of such sufferings as we have described in Austria. Of course, if the world were so poor that millions of people actually had to die of starvation, we might justly say that we should prefer to save from death our friends rather than our late enemies. But, poor as the world is, it is not so poor as all that. By effort and organization there are means to save all Europe from the worst of calamities. And as for the children, we shall not insult our readers' feelings by pretending that an appeal needs excuse. We therefore ask every one who agrees with us and who can give something—a little goes a long way at the present rates of exchange—or who feels that he can help in any way, to communicate with the Imperial War Relief Fund, or, more simply, to contribute to one of the collections which are about to be made.