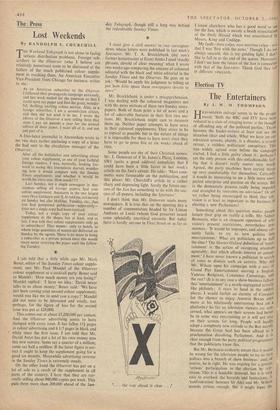 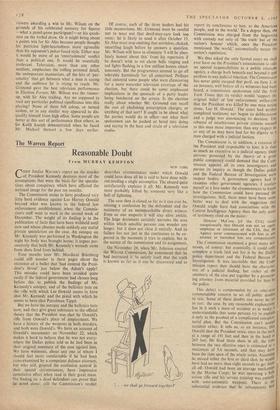 By J. W. M. THOMPSON HiGII-MINDED outrage seems to be the propel mood. 'Both the BBC and ITV have been reduced to a state of cringing terror at the thought of offending any of the political parties.' Thank heavens the leader-writers at least can see the situation clear and whole. What we have on our television screens, plainly, is a disaster, a craven retreat, a ruthless politicians' conspiracy. This was widely agreed even before the campaign started. I feel a little guilty about it : perhaps 1 am the only person with this unfashionable let* ing that it doesn't really matter very much. Agreed, the party machines have carved things up very comfortably for themselves. CertainlY, it would be interesting to see a little more uncs- pected enterprise and passion on the screen. But is the democratic process really , being impeded and strangled by restraints on television? Or are we rather being encouraged to think that tele: vision is at least as important as the business 01 electing a new Parliament?

Something about this question makes people loosen their grip on reality a trifle. Mr, SidneY Bernstein, who is an eloquent opponent of tele' vision's present restrictions, nevertheless pro' nounces: 'It would be improper, and almost cer- tainly futile, to try to turn politics into entertainment.' What are politicians up to hall. the time? The Shorter Oxford definition of 'enter- tainment' is 'the action of occupying attention agreeably; that which affords interest or amuse- ment.' I have never known a politician in search of votes to disdain such an activity. Why did Mr. Wilson open his campaign with a sort of Grand Pier' Entertainment starring a Steptoe• Vanessa Redgrave, Constance Cummings, and the rest? (It is in any case a show-business fallacy that 'entertainment' is a neatly-segregated activitY like philately: it rears its head in the oddest places. I would forfeit an eternity of Compact for the chance to enjoy Aneurin Bevan once more at his hilariously entertaining best on a platform.) So far as television viewers arc con- cerned, what appears on their screens had better be in some way entertaining or it will not staY on their screens for long. People will hardlY adopt a completely new attitude to the Box merely because the Great Seal has been affixed to 8 proclamation dissolving Parliament. And it is clear enough from the party political programmes that the politicians know this. But Mr. Bernstein evidently meant that it would be wrong for the television people to try to turn politics into a branch of show business: and, of course, he is right. He was arguing for a greater 'serious' participation in the election by tele- vision. This is a laudable demand, but it is very easy to overlook the hazards and limitations. A 'confrontation' between Sir Alec and Mr. Wilson sounds serious enough. But it might leave the viewers awarding a win to Mr. Wilson on the grounds of his celebrated memory for figures —what a panel-game participant!—or his quick- ness on the herbal draw. Or it might bring about a points win for Sir Alec because people thought his patrician light-heartedness more agreeable than his opponent's poker-faced style. Either way it would be more of an 'entertainment' verdict than a political one. It would be essentially irrelevant. Television, more than any other medium, emphasises the trifling personal detail, the unimportant mannerism, all the bits of 'per- sonality' that get between what a man is saying and the audience he is trying to reach. Mr. Grimond gave the best television performance in Election Forum; Mr. Wilson was the runner- up, with Sir Alec trailing. Are we supposed to read any particular political significance into this placing? None of them fell asleep, or turned violent, or in any similar way appeared to dis- qualify himself from high office. Some people are better at this sort of performance than others, as Sir Keith Joseph demonstrated when he faced Mr. Michael Stewart a few days earlier.

Of course, each of the three leaders had his little mannerisms. Mr. Grimond must be careful not to wear out that devil-may-care look too soon: he is likely to need it after October 15. Sir Alec must stop emitting that mirthless, choked, unsettling laugh before he answers a question. Mr. Wilson will have to eliminate 'I will be abso- lutely honest about this' from his repertoire if be doesn't wish to set alarm bells ringing and red lights flashing in a few million homes simul- taneously. But the programmes seemed to go off tolerably harmlessly for all concerned. Perhaps that annoyed some people who were clamouring for a more muscular television coverage of the election, but there could be some unpleasant implications in the spectacle of a party leader being butchered on the screen. Is the election really about whether Mr. Grimond can recall the cost of abolishing prescription charges, or anything of that sort? It ought to be about what the parties would do in office—not what their spokesmen can be pushed or lured into doing and saying in the heat and strain of a television studio.