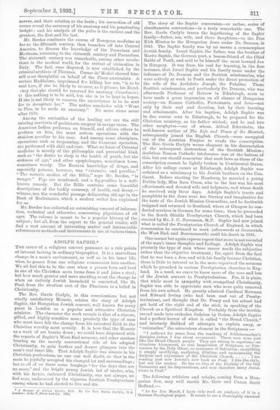 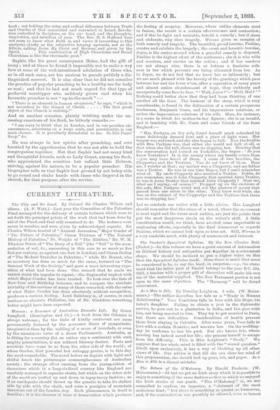 ADOLPH SAPHIR.* VILE career of a religious convert possesses as

a rule points -of interest lacking in ordinary biographies. It is a marvellous change in a man's environment, as well as in his inner life, when he passes from one religious communion into another. We all feel this to be the case when a person born and bred in one of the Christian sects turns from it and joins a rival; but how much greater and more startling must the change be when an entirely Jewish household is converted, like St. Paul, from the straitest sect of the Pharisees to a belief in Christ The Rev. Gavin Carlyle, in this conscientious but not wholly satisfactory Memoir, relates the story of Adolph Saphir, the Hungarian Jewish convert, well known for many years in London as a popular and attractive Christian minister. The character the work reveals is that of a sincere, gifted, and highly sensitive man; precisely the type of man who must have felt the change from his ancestral faith to the Christian worship most acutely. It is here that the Memoir as a work of art breaks down ; we could have dispensed with the reports of Saphir's West-End sermons, and other matters bearing on the merely conventional side of his adopted Christianity, to gain further and deeper glimpses into the man's real inner life. That Adolph Saphir was sincere in his Christian professions, no one can well doubt, or that in the main he joyfully accepted his changed lot and surroundings ; but to all of us there come longings "for the days that are no mores" and the bright young Jewish lad of twelve, who, with his father, embraced Christianity, was not always, we feel sure, understood by the vigorous Scottish Presbyterians among whom he had elected to live and die.

• A Mame* of Adolph, Saphir, D.D. By the My, Gaviu Carlyle, .M.A. London; John Y. Shaw and Co. 1899. 'The story of the Saphir conversion—or rather, series of simultaneous conversions—is a truly remarkable one. The Rev. Gavin Carlyle traces the ingathering of the Saphir family—father, son, wife, and three daughters—to the Free Kirk Mission to the Hungarian Jews under Dr. Duncan, in 1843. The Saphir family was by no means a commonplace Jewish family. Israel Saphir, the father, was the brother of Moritz Saphir, the German poet, a bosom.friend of the Chief Rabbi of Pesth, and said to be himself the most learned Jen in Hungary. It was from his zeal for learning, in the first instance, that Israel Saphir and his family came under the influence of Dr. Duncan and the Scottish missionaries, who were actively at work in Peeth under the direct protection of the wife of the Archduke Joseph, the Palatine. These Scottish missionaries, and particularly Dr. Duncan, who was afterwards Professor of Hebrew in Edinburgh, seem to have made a great impression on all classes of Hungarian society—on Roman Catholics, Protestants, and Jews—not only by their zeal and devotion, but by their learning and attainments. After his baptism, Adolph Saphir was in due course sent to Edinburgh, to be prepared for the Christian ministry, as his father wished; and he and two other neophytes—one of whom, Alfred Edersheim, the well-known author of The Life and Times of the Messiah, subsequently joined the English Church—were smuggled out of the Austrian Empire to evade the conscription. The Rev. Gavin Carlyle waxes eloquent in his denunciation of the subsequent destruction of the Scottish Mission; doubtless Roman Catholic intolerance was at the bottom of this, but one should remember that such laws as those of the conscription cannot be lightly broken in Continental States. After his college career at Edinburgh, Adolph Saphir was ordained as a missionary to his Jewish brethren on the Con- tinent. Before starting for Hamburg, he married a young Dublin lady, Miss Sara Owen, who to the last was his most affectionate and devoted wife and helpmate, and whose death he survived only three days. Adolph Saphir'e tracts and pamphlets to the Jews were too literary and imaginative for the taste of the Jewish Mission Committee, and he forthwith resigned and returned to Scotland, where at Glasgow he con- ducted services in German for some time; then he proceeded to the South Shields Presbyterian Church, which bad been erected by Mr. J. 0. Stevenson, M.P. Saphir had now joined what is called the Presbyterian Church of England, in which communion he continued to work (afterwards at Greenwich, the West End, and Bournemouth) until his death in 1891.

One cannot but again express regret that more is not revealed of the man's inner thoughts and feelings. Adolph Saphir was precisely the type of man whose career needs the subjective rather than the objective treatment ; for, apart from the fact that he was born a Jew, and with his family became Christian, there is little to interest us in the mere reports of the sermons which he preached. in various Presbyterian churches in Eng- land. In a word, we crave to know more of the man, and less of the Jewish convert to Presbyterianism. For, it is plain, that while most in sympathy with evangelical Christianity, Saphir was able to appreciate men who were quite removed from his own school. He greatly admired Cardinal Newman and Edward Irving (who had been cast out of Presby- terianism), and thought that Dr. Pusey and his school had got hold of the right end of the stick, in speaking of the Church as a Spiritual Kingdom. Probably from the terrible inroad made into orthodox Judaism by Deism, Adolph Saphir had a perfect horror of whet is called "the Broad Church," and intensely disliked all attempts to explain away, or "rationalise," the miraculous element in the Scriptures :--- "I suffered for years from the teaching of Schleiermacher's disciples (when I was about seventeen). These men were just like the Broad Church people. They are strong in negatives,—no vicarious Atonement, no real Inspiration of Scripture, no Con- version by the Holy Ghost, no assurance of Salvation ; everything is simply modifying, analysing, diluting, and undermining the doctrine and experience of the Christian Church. . . . . I am reading just now Jowett's now book on Paul. I like the style, but not the matter. Ho has no idea of the Divinity of the Old Testament and its dispensations, and sees therefore many Jewish views in Paul," The following criticism and rebuke, coming from a Hun- garian Jew, may well startle Mr. Gore and Canon Scott Holland :— " As for LUX Munch, I have only read an analysis of it in a German theological paper. It seems to mo a thoroughly unsound

book ; not holding the utter and radical difference between Truth and Oracles of God committed and entrusted to Israel, Revela- tion embodied in Scripture, on the on hand, end the thoughts, inspiration, and intuition of men. The Rev. H. S. Holland does not seem to know what Faith, is, and views it (according to this analysis) chiefly as the subjective longing upwards, not as the fiducia, calling Jesus My Christ and Saviour, and given by the Spirit This combination of High Churchisen and Broad Churchism is like the rheumatic gout."

Saphir, like his great countryman Heine, had the gift of irony ; and at times he found it impossible not to make a wry face at some of the well-intentioned adulation of those who, as in all such cases, are too anxious to parade publicly a dis- tinguished convert. It is also clear that he did not consider the practice of popular preaching to be a healthy one for body or soul ; and that he had not much regard for that type of perfervid worshipper who suddenly grows cool when his favourite preacher is not " up-to-the-mark : — "There is an element in human eloquence," he says, " which is

not according to the Gospel of Christ The first great object of the Church is worship."

And on another occasion, plainly writhing under the un- ceasing exactions of his flock, he bitterly remarks :— "I am sorry to think that in London, and in our peculiar cir- cumstances, advertising on a large scale, and persistently, is our main chance. It is peculiarly distasteful to me. So like Pears' Soap," &c.

He was always in low spirits after preaching, and ever haunted by the apprehension that he was not able to hold the congregation together. Not that Saphir had not many kind and thoughtful friends, such as Lady Grant, among his flock, who appreciated the sensitive but valiant little Hebrew, striving, against his nature, to be a popular preacher. His biographer tells us that Saphir lost ground by not being able to go round and shake hands with those who lingered in the church, for that purpose, after the service.