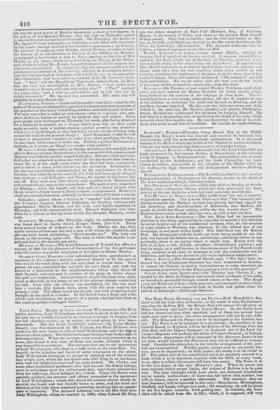 morning, Lord Walsingham was burnt to death in his bed ; and his lady was so terribly injured in an attempt to escape by leaping from her bed chamber-window, as to expire, in great agony, in two hours afterwards. The fire in his Lordship's residence. (55, Upper Harley Street), was first discovered by Mr. Wigrarn, the Bank Director. who resides in the next house to that of Lord Walsingham, and who was on his return from a party. The flames were then bursting from his Lou dship's bedroom-window. When the servants were roused and proceeded to the room, they found it one mass of flame and smoke, through which it was impossible to penetrate. The servants then ran to the apartments of Lady Walsingham, who slept in a batk room on the same floor. Un- happily, in the agitation and hurry of mind consequent on the alarm, Lady Walsingham attempted to escape by jumping out of the window into a back yard, where she was found soon after lying in an out-house, with both her thighs fractured an her arms broken. Dr. Clarke, and some other professional gentlemen who had learned the dismal tidings, were in attendance upon the unfortunate lady, until deaths released her from her sufferings, &mut half-past five o'clock. 'When the flames were partially subdued, ;he servants and officers proceeded to the apartment of Lord Walsingham ; where they found his remains almost wholly de- stroyed, the hands and feet literally burnt to ashes and the head and Skeleton of the body alone remained presenting anything like an appear- ance of humanity. The deceased nobleman was in his fifty-fifth year. Lady Walsingham, whom he married in 1804, when Colonel De Grey, was the eldest daughter of Paul Cobb Methuen, Esq., of Corsham House, in the county of Wilts, and sister to the present High Sheriff of that county. They had no family ; and the title and estates at Mer- ton, in Norfolk, and Middlesex, descend to the Reverend Archdeacon De Grey, his Lordship's eldest brother. The deceased nobleman was, we believe, a staunch ITimnent to the Reform Bill.

TIGHT LACING.—A young woman named Harris, residing at Stepney, died of apoplexy on Sunday evening. A surgeon named Pattro stated to the Jury, which sat on the body on Tuesday, that her du ti. was entirely owing to her stays being too tight-laced. It appears that Miss Harris had eaten an enormous meal of roast beef and spinach, and drank some ale ; that she was standing, about eight o'clock in the evening, admiring the brightness of the moon from the front door of her mother's house, when she suddenly exclaimed, "Oh mamma!" and fell backward lifeless. We would rather give the beef and ale the credit of the cause of this melancholy catastrophe, than the stays.

Summes.—On Tuesday, a man named Thomas Robinson, aged about sixty, who had worked for Messrs. Pontifex for about twenty Years, hung himself on the staircase of his lodgings in Shoe Lane. The de- ceased had been a very steady, sober person, till the ill conduct of two of his children so distressed his mind that he took to drinking, and his intellects became impaired. On the same day, between seven and eight o'clock in the morning, Mr. Barrett, plumber and glazier, Paddington Street, Marylebone, terminated his existence by hanging himself. He had been in a desponding state of mind since the death of his wife, which occurred about five months ago. He was discovered by one of his chil- dren, who went to call him to breakfast. He has left six small children.