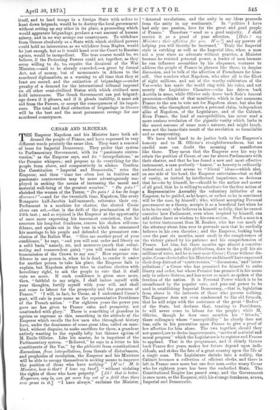 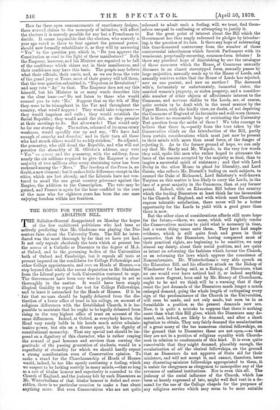 THE Emperor Napoleon and his Minister have both ad- dressed the people of France, and have expressed in very different words precisely the same idea. They want a renewal of lease for Imperial Democracy. They prefer that system to Parliamentary Government, with its " passionate contro- versies," as the Emperor says, and its " interpellations," as the Premier whispers ; and propose to do everything for the people from above, and comparatively in silence. Confirm the Constitution " Imperial and Democratic," cries the Emperor, and then " time too often lost in fruitless and passionate controversies may be more advantageously em- ployed in seeking the means of increasing the moral and material well-being of the greatest number." ".Du pain! " shrieked the women of the Terror, "Du pain bas les longs discours ! "—and for the twentieth time, Napoleon, like every Bonaparte half-Jacobin half-monarch, reiterates their cry. Parliament is a machine for chatter, the elected Caesar alone can act,—that is the drift of the proclamation of the 24th inst. ; and so rejoiced is the Emperor at the opportunity of once more expressing his innermost conviction, that he recovers his long-lost frankness, renews his shaken self-con- fidence, and speaks out in the tone in which he announced his marriage to his people and defended the premature con- clusion of the Italian War. " Give me another proof of your confidence," he says, " and you will seat order and liberty on a solid basis," namely, ME, and moreover (mark that culmi- nating and transcendent gain), " you will render easier the transmission of the Crown to ,my son." How supreme con- fidence in one person is, when he is dead, to render it easier for another person to take his place, the Emperor fails to explain, but Napoleon always tries to confuse elective with hereditary right, to ask the people to vote that it shall Tote no more. If such confidence is given once more, then, " faithful to my origin, I shall imbue myself with your thoughts, fortify myself with your will, and shall not cease to labour for the prosperity and the greatness of France." I will, in fact, be Omar, as I understand Caesar's part, will rule in your name as the representative Providence of the French nation.' " For eighteen years the power you gave me has given to France calm and prosperity, not unattended with glory." There is something of grandeur in egoism so supreme as this, something in the attitude of the Emperor which recalls the few -men who throughout history have, under the dominance of some great idea, called on man- kind, without disguise, to make sacrifices for them, a grandeur entirely wanting to the equally lofty but thinner egoism of M. Emile 011ivier. Like his master, he is impatient of the Parliamentary system. "Relieved," he says in a letter to his constituents of the Var," by the plebiscite from constitutional discussions, from interpellations, from threats of disturbances, and prophecies of revolution, the Emperor and his Ministers will be able to occupy themselves in seeking means to improve the position of those who have nothing " [H•tit! M. le Ministre, how is that? I have my land]. " without violating the rights of those who have property." [Ah! that is better. Emperors, may be, can get more hay out of a field than there was grass in it.] "I have always," exclaims the Minister,

" detested revolutions, and the unity in my ideas proceeds from the unity in my sentiments." In "politics I have had only one passion, love for the great and good people of France." Therefore " send us a good majority. I shall receive it as a proof of your affection, [Hola ! my

Minister; their affection for you. Irwl and my powers of helping you will thereby be increased." Truly the Imperial

style is catching as well as the Imperial idea, when a man not a year since an advocate without practice, a Minister because he resisted personal power, a leader of men because he can influence assemblies by his eloquence, ventures to address the people of France in phrases like those, to despise discussion, and to talk of the affection of Frenchmen for him- self. One wonders what Napoleon, who after all is the Elect of eight millions, and not of the worthy cultivators of the Var—who has made the world ring with his voice, and not

merely the Legislative Chamber—who has driven back Austria in arms, while 011ivier only drove back Noir's funeral procession—thinks of that manifesto, which in fact summons. France to the urn to vote not for Napoleon alone, but also for 011ivier, who throughout asserts a personal claim, independent alike of Napoleon, of the Legislature, and of the Cabinet. Even France, the land of susceptibilities, has never read a more curious revelation of the gigantic vanity which lurks in the secret recesses of some men's natures, and might laugh, were not the immediate result of the revelation so formidable and so exasperating.

We have tried hard to do justice both to the Emperor's honesty and to M. 011ivier's straightforwardness, but no candid man can doubt the meaning of manifestoes like these. They mean that the Emperor sees his way to retain the position of Caesar, of one far above Parliaments with their chatter, and that he has found a new and most effective instrument, a man perfectly " honest," as honesty is ordinarily understood, and not averse to "liberal " ideas—which also, on one side of his head, the Emperor entertains—but so full of vanity, so fretted by intellectual impatience, so desirous that he—he by himself, he—should be the author and mover of all good, that he is willing to substitute for the free action of a Representative Assembly the voluntary initiative of an Emperor, to be guided, as he hopes, or rather as he is convinced will be the case, by himself ; who, without accepting Personal government as a theory, accepts it as a beneficial fact when he is to be its soul ; who believes in himself so fully, that he cannot conceive how Parliament, even when inspired by himself, can add either force or wisdom to his own action. Such a man is a far better instrument than M. Rouher, who has too much of the attorney about him ever to persuade men that he cordially believes in his own theories ; and the Emperor, looking hack over the past six months, must exult in the completeness of the victory gained by his patience and his comprehension of France. Let him, but three months ago almost a constitu- tional monarch, gain this plebiscitutn, draw to the poll his six

millions of votes, and he is once more Caesar; Caesar without dis-

guise, Caesar elected after his Minister and himself have expressed their deep distrust of "controversies," " discussions," and " inter- pellations ;" a Caesar who has promised for himself to unite liberty and order, but whose Premier has promised in his name only to relieve distress, and has never so much as spoken of the freedom of the nation. It is Personal Power which is to be reconfirmed by the popular vote, and personal power to be used in establishing Imperial Democracy,—that is, legislation from above in the interests of those who possess nothing. The Emperor does not even condescend to the old formula, that he will reign with the assistance of the great "Bodies " of the State, but declares that, trusting to Providence, he will never cease to labour for the people ; while M.

011ivier, though he does once mention his " friends," those colleagues whose " susceptibility " he clearly does not fear, calls in his peroration upon France to give a proof of her affection for him alone. The two together, should they not quarrel, are to devise improvements, "modes of material and moral progress" which the Legislature is to register and France to applaud. That is the programme, and it clearly throws back France five years, makes her future depend upon indi- viduals, and stakes the fate of a great country upon the life of a single man. The Legislature shrinks into a nullity, the Cabinet becomes a collection of efficient clerks, and there is left in France once more but one free man,—the weary Caesar who for eighteen years has been the embodied State. The Constitutional Empire has passed away, and the Government is once more, as the Emperor, with his strange frankness, avows, Imperial and Democratic.

How far these open announcements of reactionary designs, these avowed claims to the monopoly of initiative, will affect the electors it is scarcely possible for any but a Frenchman to decide. It seems impossible that the electors, who scarcely a year ago voted as three to four against the personal power, should now formally rehabilitate it, as they will by answering "Yes" to the question put, which is, " Do you approve the Constitution as read in the light of these manifestoes?" Both the Emperor, however, and his Minister are reported to be full of the confidence which shines out in their manifestoes, and their confidence may have this basis. The people may believe what their officials, their. curds, and, as we see from the vote of the grand jury at Tours, most of their gentry will tell them, that the true question submitted is, "Napoleon or Revolution?" and may vote "Ay" to that. The Emperor does not say this himself, but his Minister in so many words describes this as the clear issue :—" Do not listen to those who would counsel you to vote 'No.' Suppose that on the 8th of May they.were to be triumphant in the Var and throughout the country, what would happen ? They would take vengeance— they would imprison and exile ; they would establish the Social Republic ; they would assail the rich, as they promise at their meetings to do. But afterwards ? That would only be for one stormy day. The nation, ashamed of its momentary weakness, would speedily rise up and say, We have had enough of anarchy and disorder,' and in their turn all those who had struck others would be rudely stricken." So adjured, the peasantry, who still dread the Republic, and who will not perceive the absurdity of M. 011ivier's address, may vote "Yes" en ,:7,35e; ant the peasantry, with the soldiery, form nearly the six millions required to give the Emperor a clear majority of two millions after every abstaining voter has been reckoned among the "Noes." The freedom of the Press is, no doubt, a new element; but it makes little difference except in the cities, which are lost already, and the Liberals have not ven- tured to assail the one great country grievance against the Empire, the addition to the Conscription. The vote may be gained, and France is again for the hour confided to the care of the man who for eighteen years has been the one man enjoying freedom within her frontiers.