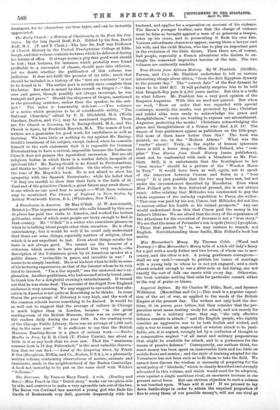 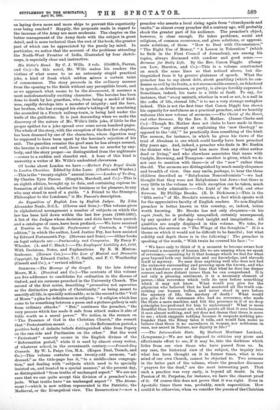 Wilkinson. (Macmillan and Co.)—This work is a popular exposi- tion of the art of war, as applied to the needs of the British Empire at the present day. The writers not only hold the doc- trine, Si vis pacem, para bellum, but they consider that the pre- paration must mean making ready for attack, and not merely for defence. In a military sense. they say, " the only effective defence consists in attack ;" and the English people, who rightly consider an aggressive war to be both foolish and wicked, and only a war to resist an unprovoked or wanton attack to be justi- fiable, are, it is argued, wrongly led by a confusion of thought to a comparative neglect "of all naval and military preparations that might be available for attack, and to a preference for the means of passive defence." Consequently, our authors think, too much money has been spent on immoveable forts and too little on mobile fleets and armies ; and the style of training adopted for the Volunteers has not been such as to fit them to take the field. We cannot here discuss the wisdom or necessity of preparing for the naval policy of " blockade," which is clearly described and strongly advocated in this volume, and which would need for its adoption, even against a single maritime rival, an enormous increase in our present naval force. But one obvious objection to such a scheme is not touched upon. Where will it end ? If we proceed to lay down battle-ships in order to attain the required proportion of five to every three of our possible enemy's, will not our rival go

on laying down more and more ships to prevent this superiority ever being reached ? Happily, the proposals made in regard to the increase of the Army are more moderate. The chapter on the better management of the Army deals with the subject in great detail, and is more technical than the rest of the book, the greater part of which can be appreciated by the purely lay mind. In particular, we notice that the account of the problems attending the North-West Frontier of India, illustrated by four sketch- maps, is especially clear and instructive.