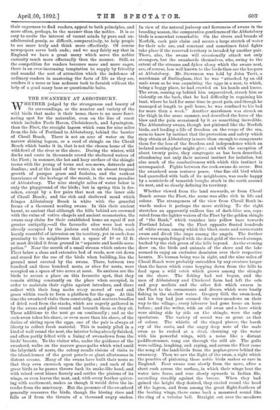 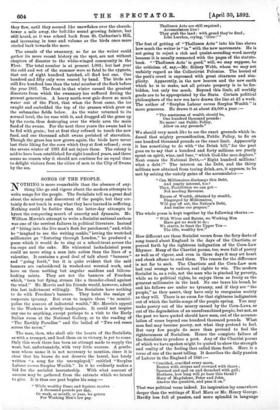 THE SWANNERY AT ABBOTSBURY.

WHETHER judged by the strangeness and beauty of its surroundings, or the number and variety of the wild birds that make it their home, there is no more fasci- nating spot for the naturalist, even on the line of coast which includes Poole Haven, Christchurch, and Lymington, than the Fleet, the straight lagoon which runs for nine miles from the Isle of Portland to Abbotsbury, behind the barrier of Chesil Beach. There is not an acre of water on the narrow shining lagoon, or a rood of shingle on the Chesil Beach which banks it in, that is not the chosen home of the wild-fowl of the liver or the shore. During the winter, wild ducks and coots in thousands crowd the sheltered waters of the Fleet; in summer, the hot and hazy surface of the shingle teems with the young of terns and sea-mews, dotterels and dunlins ; and at the head of the water, in an almost tropical growth of pampas grass and fuchsias, and the rankest luxuriance of the herbage of the marsh, is the swan paradise of Abbotsbury. The nine straight miles of water below is only the playground of the birds ; but in spring this is for- saken, except by a few pairs that nest on the inner side of Chesil Beach ; and the rich and sheltered mead which fringes Abbotsbury Brook is white with the graceful forms of a thousand nesting swans. In this their ancient haunt, so ancient that although the hills behind are crowned with the ruins of votive chapels and ancient monasteries, the swans may claim for their established home an equal if not greater antiquity,—all the favourite sites were last week already occupied by the jealous and watchful birds, each keenly resentful of intrusion on its territory, yet in such close proximity to its neighbours that a space of 10 or 12 ft. at most divided it from ground in " separate and hostile occu- pation." Near the mouth of a small stream which enters the Fleet below a close and extensive bed of reeds, now cut down and stored for the use of the birds when building, lies the ground most coveted by the swans. There, between two hundred and three hundred nests, or sites for nests, were occupied on a space of two acres at most. So anxious are the birds to secure a place on this favourite spot, that they remain sitting constantly on the place when occupied, in order to maintain their rights against intruders, and there collect with their long necks every morsel of reed and grass within reach to form a platform for the eggs. At this time the swanherd visits them constantly, and scatters bundles of dried reed from the stacks, which are eagerly gathered in by the swans and piled round and beneath them as they sit. These additions to the nest go on continually ; and as the cock-swan takes his share, or even more than his share, of the duties of sitting upon the eggs, one of the pair is always at liberty to collect fresh material. This is mainly piled in a kind of wall round the nest, the interior being already finished, and often partly felted with a lining of swansdown from the birds' breasts. To the visitor who, under the guidance of the swanherd, walks on the narrow grass-paths which wind amid the labyrinth of nests, the colony recalls visions of visits to the island-homes of the great petrels or giant albatrosses in distant oceans. Many of the swans have built their nests so that they even encroach upon the paths ; and each of the great birds as he passes throws back its snake-like head, and with raised crest hisses fiercely and rattles the pinions of its wings, or even leaves the nest, and, with every feather quiver- ing with excitement, makes as though it would drive the in- truder from the sanctuary. But the presence of the swanherd generally reassures the birds, though the hissing rises and falls as if from the throats of a thousand angry snakes.

In view of the natural jealousy and fierceness of swans in the breeding season, the comparative gentleness of the Abbotsbury birds is somewhat remarkable. On the rivers and broads of Norfolk, each pair claim and secure a large stretch of water for their sole use, and constant and sometimes fatal fights take place if the reserved territory is invaded by another pair. There, also, the swans will occasionally attack not only strangers, but the swaaaherds themselves, who, owing to the extent of the streams and dykes along which the swans nest, are, of course, less well known to the birds than are the keepers at Abbotsbury. Mr. Stevenson was told by John Trett, a marshman of Surlingham, that he was " attacked by an old male swan as he was examining the eggs in a nest, to which, being a boggy place, he had crawled on his hands and knees. The swan, coming up behind him unperceived, struck him so violently on the back, that he had difficulty in regaining his boat, where he laid for some time in great pain, and though he managed at length to pull home, he was confined to his bed for more than a week." Another marshman was struck on the thigh in the same manner, and described the force of the blow and the pain occasioned by it as something incredible. The Abbotsbury swans, though not pinioned like the Norfolk birds, and leading a life of freedom on the verge of the sea, seem to know by instinct that the protection and safety which they obtain at Abbotsbury is more than enough to compensate them for the loss of the freedom and independence which an isolated nesting-place might give ; and with the exception of about twenty pairs, they congregate as has been described, abandoning not only their natural instinct for isolation, but also much of the combativeness with which this instinct is accompanied. Fights between the cock-swans do occur. But the swanherd soon restores peace. One fine old bird which had quarrelled with both of its neighbours, was made happy by a semicircle of tamarisk boughs stuck in the earth around its nest, and so clearly defining its territory.

Whether viewed from the land seawards, or from Chesil Beach across the Fleet, the scene was alike rich in life and colour. The strangeness of the view from Chesil Bank in- wards makes it perhaps the more striking. To the right stretches an apparently endless line of dark-blue sea, sepa- rated from the lighter waters of the Fleet by the golden shingle of "the Bank," which vanishes into yellow haze towards Portland Island. On the Fleet opposite floated hundreds of white swans, among which the black coots and cormorants swam and dived like imps among the angels. The further shore was again fringed with the dead-gold of the reed-stumps, backed by the rich green of the hills beyond. As the evening drew on, the birds and animals of the shore and the lake seemed to enjoy an exclusive dominion over their respective haunts. No human being was in sight, and the nine miles of Chesil Beach were probably untrodden by any creature larger than the hares which came hopping down from the hills to feed upon a wild vetch which grows among the shingle on the shore. The fishing had not begun, and the men of Abbotsbury and Chickerel farm had left the eels and grey mullets and the other fish which swarm in the Fleet to the cormorants and divers, which were busily fishing in the shallow water. Gregory Gill, the swan-herd, and his boy had just crossed the water-meadows on their way to the village ; every labourer had gone home an hour before ; and the writer, with an old swan and a hare which were sitting side by side on the shingle, were the only spectators. The variety of sound was as great as that of colour. The whistle of the ringed plover, the harsh cry of the coots, and the angry deep note of the male swan as he rushed at a rival, churning up the water with his powerful wings, with a noise like a distant paddle-steamer, rang out through the still air. The gulls were calling, laughing, and crying, and across the Fleet came the song of the land-birds from the poplar-grove behind the swannery. Then we saw the flight of the swan, a sight which the practice of pinioning these noble birds makes so rare in England. Four swans rose slowly from the mere, after a short rush across the surface, in which their wings beat the water into foam, and rose slowly upwards in Indian file, ascending steadily against the breeze. When they had gained the height they desired, they circled round the head of the lagoon, and from among the great flight-feathers of the beating wings, there came back a measured sound like the ring of a tubular bell. Straight out over the meadows

they flew, until they seemed like snowflakes over the church- tower a mile away, the bell-like sound growing fainter, but still heard, as it was echoed back from St. Catharine's Hill, and increasing in tone and volume as the birds once more circled back towards the mere.

The annals of the swannery, so far as the writer could gather its more recent history on the spot, are not without chapters of disaster to the white-winged community in the Fleet. The total number is at present 1,002; but last year the cold and wet of the summer were so fatal to the cygnets, that out of eight hundred hatched, all died but one. One hundred and fifty only were reared by hand. The birds are still five hundred less than the total number of the flock before the year 1881. The frost in that winter caused the greatest disasters from which the swannery has suffered during the present generation. A heavy north-west gale drove so much water out of the Fleet, that when the frost came, the ice caught and embedded the top of the grasses which grow on the submarine fields below. As the water returned to its normal level, the ice rose with it, and dragged all the grass up by the roots, thus destroying over the whole area the main food of the swans. For the next three years the swans had to be fed with grain; but at first they refused to touch the new food, and one thousand adult swans perished of starvation. Though the grass has now grown again, the birds have never lost their liking for the corn which they at first refused; even the severe winter of 1891 did not injure them. The colony is said to have been established for eight hundred years, and there seems no reason why it should not continue for an equal time to delight visitors from the cities of men to the City of Swans by the sea.