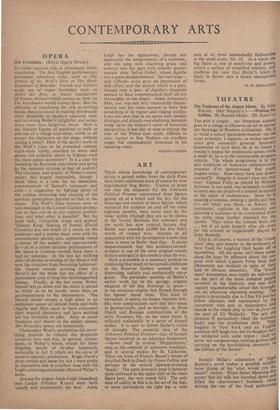 Der Freischiitz. (Royal Opera House.) Leigh has the appearance, though

not apparently the temperament, of a soubrette, and she sang with charming grace and entered into her part with notably greater success than Sylvia Fisher, whose Agathe was a great disappointment. Her two large— and difficult—arias gave an impression of dull effort; and the anxiety which is a part, though only a part, of Agathe's character seemed to have communicated itself all too thoroughly to the singer. James Johnston's Max, too, was not very successfully charac- terised and his voice seemed to have lost something of its vigour and ringing quality. I am not sure that in an opera with spoken dialogue and already overwhelming demands mule upon the listener's sense of historical perspective, it was fair or wise to entrust the role of the Prince (not really difficult to cast, surely) to Jess Walters—an excellent singer but unmistakably American in his. speaking voice.